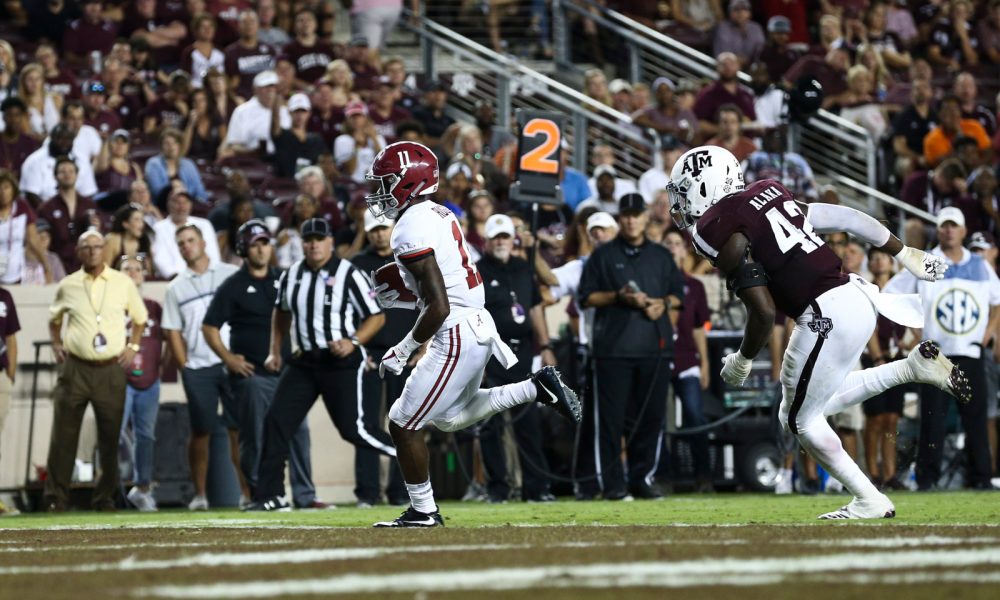 Alabama head coach Nick Saban finally got a team that challenged his squad for the first time since Florida State battled the Crimson Tide in week one at Mercedes-Benz Stadium.

Despite the Tide not finishing the game like it wanted to, help came from some impactful freshmen to guide the unit to a 27-19 win over Texas A&M.

As Saban and company travels back to Tuscaloosa from College Station, Texas, all focus shall be on having a stronger week of practice in preparation to face Arkansas on homecoming for the second time since 2015.

Listed below are the freshmen (true, redshirt) that stood out over the weekend.

Jerry Jeudy has totaled at least one catch in three straight games against Vanderbilt, Mississippi and Texas A&M.

He hauled in two passes for 24 yards versus the Aggies — including a 17-yard reception in the fourth quarter, to set up an Andy Pappanastos 44-yard field goal.

Jeudy’s catch went for a first down, while Pappanastos’ attempt gave Alabama a 27-12 lead.

Ruggs currently leads the Tide in touchdown receptions (three) after he grabbed his latest score against Texas A&M, which came on an 8-yard pass from Jalen Hurts in the third quarter.

It was his only catch of the game, but it gave Alabama a 24-3 lead at the time. Ruggs also did well fielding punts as he returned three for 12 yards, and even called fair catch when it was necessary.

He collected one tackle, but it was huge nonetheless.

Williams’ sack of Kellen Mond, which resulted in a loss of four yards, was one of four sacks by the Crimson Tide’s defense and one of seven tackles for loss.

The redshirt freshman out of Birmingham assisted Alabama in limiting the Aggies to 71 yards rushing on 40 carries.

A product of James Clemson High School in Madison, Ala., the defensive end made his presence known last week.

LaBryan Ray, who’s listed at 6-foot-5 and 272 pounds, has a fast first step and Texas A&M saw it first-hand.

He registered two tackles, including a sack that went for a loss of 14 yards. Ray is one of multiple players getting reps while Da’Shawn Hand heals up from injury.

He and ex-Tide safety Eddie Jackson hail from the same high school – Boyd Anderson in Fort Lauderdale, Fla.– and like Jackson, Daniel Wright is becoming a master of special teams.

Wright was credited with one tackle, but held a prominent role in holding Christian Kirk to 21 kick return yards on two attempts and Cullen Gillaspia to three yards on a punt return.

With a number of players getting hurt, Saban has had to rely on freshmen more this season than any other time prior. The guys that he has placed in different situations have stepped up, which brings a smile to his face and gets these individuals more confidence moving forward.

Even in being tested, all five freshmen stood the test. Alabama will expect more of that for its upcoming matchup with the Razorbacks, as it intends on improving to 7-0 on the season.