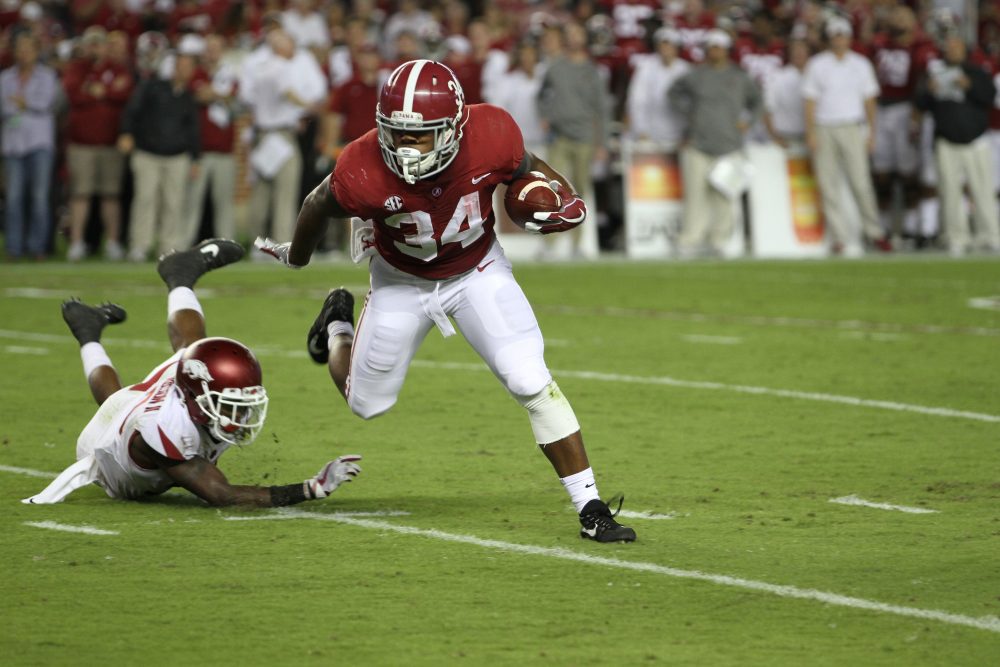 Read why one play, the opening hand off, has become one of the most dreaded plays for opponents of the Crimson Tide in recent weeks.

“First play from scrimmage for Alabama, Hurts under center, ball is snapped, hand of to Harris who hits the line. He finds a seam, he’s into the secondary, he’s got nothing but green in front of him, he’s at the 35, the 50, the 40, Harris pulling away, he’s going to go all the way! Touchdown Alabama and Damien Harris!” That’s how more than one opening play announcements may have sounded as Damien Harris has taken the opening hand off now in two games and made the score 7-0 before even a minute of clock has expired.

Now the opponent is all but dreading the rest of the game and seeing Harris add to his totals in between bouts of other running backs padding their own stats. This Alabama running game is something to marvel.

On Saturday, Alabama handed the ball to five running backs who all had an average yardage per carry that if you handed it to them three times, the chains would never stop moving. If that weren’t bad enough, they had a sixth runner, the quarterback, Jalen Hurts, who also averaged 4.1 yards a carry, also enough to change the measuring chains every three runs.

In all, the Bama rush attack put up 308 yards total against an SEC defense. We can hear the groans from future opponent’s defensive coordinators all the way to Tuscaloosa. It’s just something you just can plan to stop, you just plan to slow down as much as you can.

Harris, continues to be the Alpha Dog, leading in both total yardage and yards per carry, this time with 125 yards on just nine touches for a mind blowing 13.9 yards a carry. Yes folks, he is just that good.

And Saban plays him the same way a wine connoisseur pours fine wine, in small amounts to savor the wonder of it all for as long as possible. Damien Harris would be the clear front runner for Heisman if he was given the ball 25 times a game, For the math impaired,  with the same average yard per carry, Harris would have run for 337 yards or more on Saturday.

But with so many racehorses in the stable, Saban is stingy in giving any one running back too many carries. Keep them fresh, keep them healthy, keep them hungry.

No one else in Alabama’s fabled history has ever had a story line like Harris where first play hand offs turn into first play touchdowns of long runs. Teams are left just shaking their heads and thinking, “Oh no, not again.”

But with Halloween approaching, the worst nightmare for future opponents isn’t witches or goblins, It’s Damien Harris taking the opening hand off and going 75 yards for a touchdown.