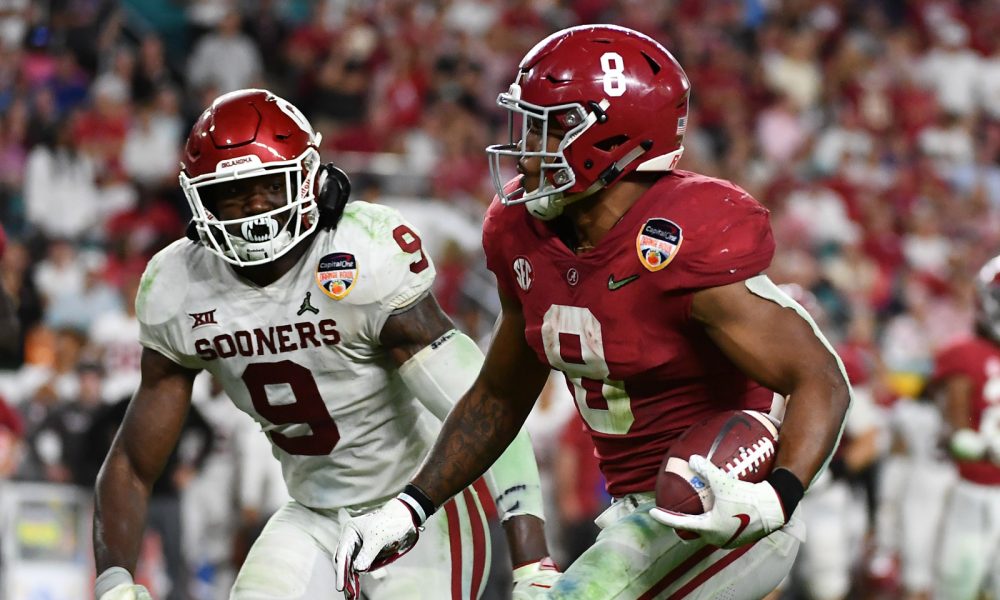 Consumers of the National Football League are set to pack out Nashville, Tenn., next week for this year’s NFL Draft. Josh Jacobs, a product of the University of Alabama, is regarded as the top prospect at running back – especially if one dissects his tape from last season.

His explosiveness and big play abilities through 154 touches says it all as he posted 1,315 all-purpose yards (640 rushing, 247 receiving, 428 kick return) with 15 touchdowns.

Despite not being the primary back under Nick Saban, Jacobs found ways to deliver a brand of physicality, acceleration and versatility – which led to the Crimson Tide winning a Southeastern Conference title and him being the Most Valuable Player in Alabama’s win over Georgia.

His improved 40-time at the Tide’s second Pro Day has secured him a first-round grade and while some analysts have him positioned at No. 5 overall to the Tampa Bay Buccaneers, there is a team in the AFC South that hosted the Oklahoma native and former three-star this week.

Frank Reich, head coach of the Indianapolis Colts, has a great rapport with players.

Prior to taking the helm, he was the offensive coordinator for the Philadelphia Eagles from 2016 to 2017 and helped the franchise capture its first Super Bowl in 2017. Reich, who was a pretty good basketball player in his youth, challenged Jacobs to a round of HORSE and won.

From Up to the Minute Live: #Bama RB Josh Jacobs lost a game of HORSE to #Colts coach Frank Reich (https://t.co/YjSt5uNGbD) and I break down what that means… pic.twitter.com/oMCTQeEbPp

Andrew Luck, who enters his eighth season next fall, is the Colts’ centerpiece at quarterback but the team is in serious need of a game-changing rusher. With an offensive line that falls behind the Dallas Cowboys for best in the NFL, Marlon Mack totaled 908 yards rushing with nine touchdowns for Indianapolis on its run to a 10-win season (10-6) and a playoff berth in 2018.

The quartet of Mack, Nyheim Hines, Jordan Wilkins and Jonathan Williams all have talent; however, Jacobs provides a gear that the Colts can’t turn away. After missing the entire 2017 season with a shoulder issue, Luck returned to MVP-caliber form with 4,593 passing yards and 39 touchdowns – both of which ranked him in the top-five for signal callers in the league.

Should it draft Jacobs, Luck would have T.Y. Hilton, Devin Funchess, Chester Rogers, Deon Cain and “Mr. Diversity” from the Tide. Reich and the Colts have the 26th overall pick of the first round.

Will it choose to use it on Jacobs? Next Thursday night will unveil everything.