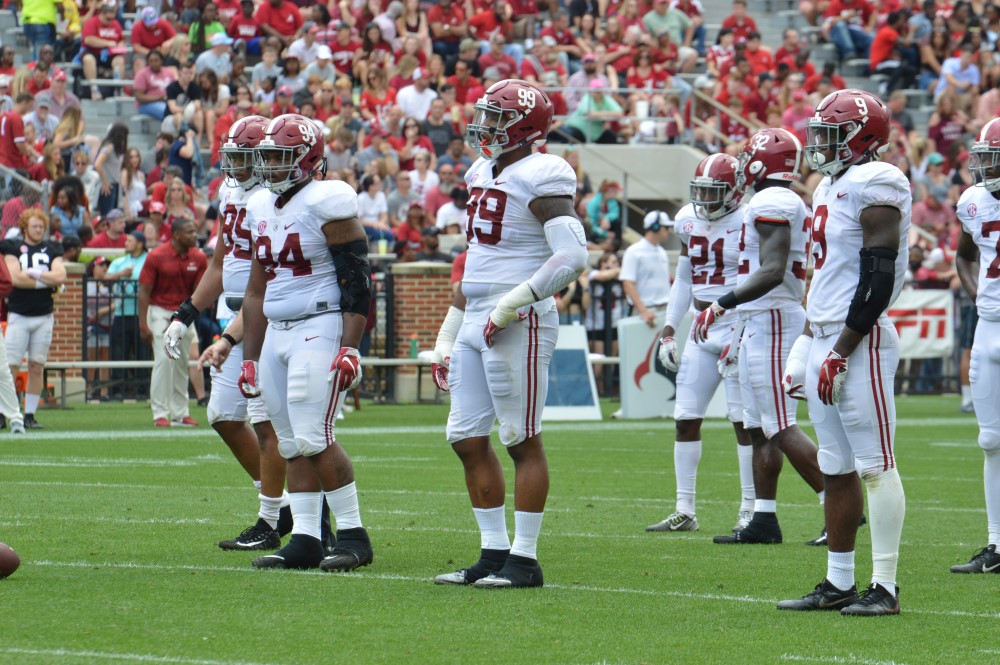 It’s easy to understand with star linebackers going to the NFL, transferring away and moving to tight end that it could make you worry. Read this and stop.

In previous articles in Larry’s Lowdown here on Touchdown Alabama Magazine, we’ve outlined several positions that were just an downright embarrassment of riches with depth and talent. In reading your comments, it seems many of you are worried about the linebacker corp.  and with the transfer of Eyabi Anoma, a sure fire guy who was destined to be at least a star second string player, we can see why that is something to worry about.

So let’s start with the outside linebacker group since it’s the one with the most worry behind it.

Eyabi’s transfer portal request shouldn’t come as a shock to those who keep up with the program. He had toyed with the idea once before, and chatter is that he also has a sick family member he’d like to be closer to, he wasn’t enrolled currently and therefore couldn’t work out in summer practices and he’d also been suspended by Alabama a few weeks back. He was also said to be cited for lack of attention to detail earlier and knew that he’d have to settle for a backup role this season after hoping for a starting job.

He’s from Maryland, his sick family member, a beloved grandmother, is in Maryland and he has a former coach, Mike Locksley as the head coach at Maryland recruiting him. So most of us thought he’d head to Maryland. So it was a shock that he’s leaving for Houston, but the Tide has lots of time to groom the next man or in this case, next men up. His role on the outside linebacker group was to be an edge rusher and he was a five star recruit who will be missed.

When you combine that with the departure of stars like Christian Miller and Jamey Mosley from the outside linebacker group, not to mention that Cameron Latu was moved from this group to tight end and it’s easy to see the worry.

So we’ll give you that while the remaining pool at outside linebacker isn’t that deep, the talent level could more than make up for that as long as the injury bug doesn’t bite too hard at this position.

To keep that from happening, Saban held Terrell Lewis out  of spring practice and A-Day to ensure Lewis did not re-injure an ACL tear. That means he should be healthy by fall and that your starters on the outside linebacker corp will be Lewis and a sure early round NFL pick Anfernee Jennings. Folks you would really be hard pressed to find a better pair of outside linebackers and these two will lead the SEC and be among the nation’s leaders at their positions should they stay healthy.

So the two outside backers are among the best in the SEC and what about the inside linebackers?

Ok, you know about Dylan Moses, the alpha dog in the whole linebacker group. He’s the coach on the field, calling the plays for the group and leading by example. He’s always been great but he’s ready to step it up a notch this season and become one of the legendary folks at this position. I wouldn’t trade Moses for any linebacker in the SEC to fill this spot, so you could say it’s as good as it gets.

However, the clear front runner is red shirt senior Joshua McMillan, who at 6’3” and 237 pounds is one of the bigger of the group with the muscle to stop the run. He knows the system as well as anyone on the team and he’s ready to show he can take on role and be a huge asset.

So of the folks predicted here to be the starters, three out of four are sure bet starters and set to have a big year ahead of them. That’s good, but hardly a embarrassment of riches. Well, these four may the top linebacker group in the SEC by season’s end, but what is great is that even with one linebacker going to tight end and one leaving in the transfer portal, Alabama still has 13, yes you read that right, 13 great athletes sitting on the bench and there is some great players in that group.

That means in theory, each starter has just over three men who could possibly back them up. So who are these backups?

Starting with the inside backers, Jaylen Moody and Ale Kaho looked good on special teams last season and made themselves noticed in the A day game. Both these guys are also good inside line backing prospects who have the size and spark to make big plays. Moody is a 6’2”, 228 pounder and Kaho is the same weight, but an inch shorter. Both are sophomores with a great understanding of the playbook and schemes. Right now both these men are primarily working with the second team unit and that’s a spot they may keep.

Saban is pushing Markail Benton to get a little more consistent. He’s a 6’2”, 235 pound red shirt sophomore who has great speed that made him a special team standout last season as well as a reliable guy you could rotate in at the inside linebacker spot. You’ll see him rotating in and out a lot this season.

And Shane Lee a top recruit coming in this season will certainly get some reps. At 6’0” and 246 pounds, he’s the second heaviest linebacker in the group only behind Anfree Jennings. Also on third string is Christian Harris, a big 6’2”, 244 freshman who Saban stole right out from under LSU. He’s from Baton Rouge and was one of the top inside linebacker recruits in the country. Once he gets things under his belt, this is a guy who could be a huge star for Alabama some day.

Are you as worried now about the inside linebacker position as you were before you read this? If you are, you shouldn’t be. Now for the subs on the outside.

Right now, Chris Allen a huge 6’4”. 250 pounder is one of the second string outside backers. He’s a red shirt sophomore who now knows the system and can sub at either outside spot. The other second string player is someone I’ve personally wanted to see get some playing time in big game situations and that’s Ben Davis, a red shirt junior who has patiently waited through a sea of super talented folks to finally get a chance to shine. He too is a huge 6’4” 245 pound muscle bound guy who can punish running backs and still be quick enough to be deadly in an outside rush. Davis came in as highly touted as they come. He was he nation’s top-ranked inside linebacker by ESPN, Rivals, Scout and 247Sports and that’s just unheard of that all would agree on one players being the best. Of course he was a consensus five-star prospect and is the son of Alabama legend Wayne Davis, who still holds the Tide’s career record for 327 tackles. Folks, this was the nation’s highest rated inside linebacker prospect in the country in 2015 and the talent level here was so high that he’s just now making it to second string. That’s ridiculous talent on this team folks and now you can see why Saban was so unconcerned about linebacker depth that he sent a great prospect at that position to shore up the tight end position.

And some of you were worried about the line backing corps? And you still haven’t read about them all yet.

Third string on the outside is looking like Jarez Parks, starting his second year on the team, this big 6’4”, 240 pounder from Florida played a lot of defensive end in high school, but spent last year learning the ropes at outside linebacker. Can you see a little bit of Saban’s love for tall big outside guys? Well Parks sure fits that mold. And so does King Mwikuta, don’t ask me to pronounce that, who at 6’5” and 243 as just a true freshman is someone you know Saban will want to give a few looks to. Both these guys have benefited from Eyabi entering the transfer portal.

So the first three strings look pretty solid, but there’s still 6’4”, 222 pound freshman Kevin Harris II, yet another tall backer who just needs a year of strength and conditioning coach Scott Cochran’s tender loving car to bulk up a bit.

There’s also 6’3”, 216 pound Joe Donald, a senior, 6’2”, 229 pound junior William Cooper and another linebacker with another very famous name, Wes Baumhower, a 6’0”, 220 pound red shirt freshman. So yes my friends, there is three solid teams of talented, healthy linebackers and still some good backups beyond that.

Therefore you can see why this old writer doesn’t see a position to worry over, but add to his list of embarrassment of riches articles. So while other writers and some fans say no, this isn’t a group with a lot of depth, I say they don’t know diddly.

If you like these player group analysis and you’ve missed any of the articles in this series, see them here: