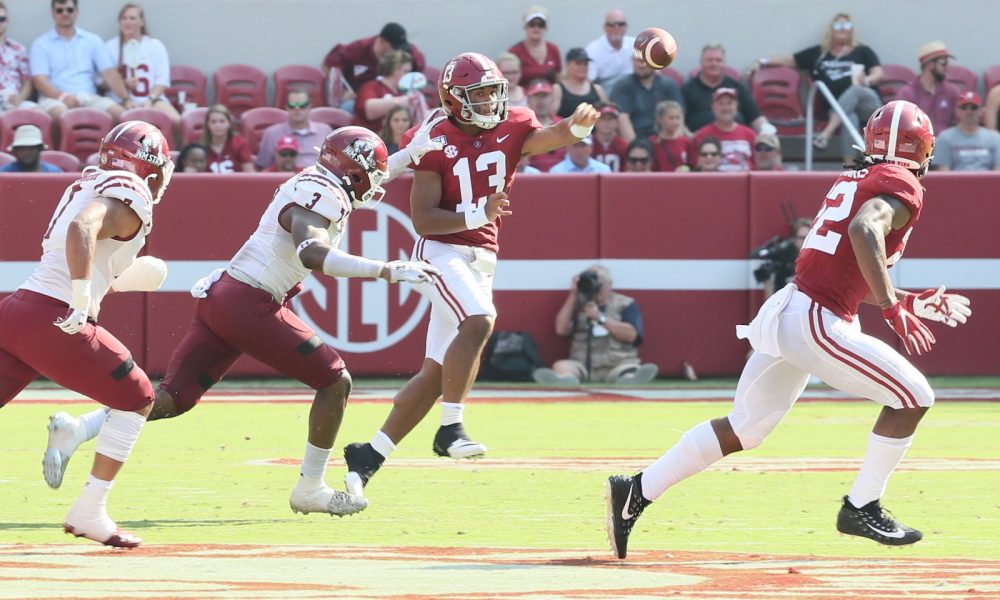 He has outperformed Trevor Lawrence of Clemson through two games and captains an offense that is averaging 52 points and 557.5 yards per matchup; however, Tua Tagovailoa was not pleased with his performance versus New Mexico State inside Bryant-Denny Stadium.

The junior quarterback had four touchdowns (one rushing) and was under center for 45 of Alabama’s 62 points on last week, but in terms of addressing local reporters, all Tagovailoa spoke on was the plays he did not make. Between his father, Galu Tagovailoa, and former NFL quarterback, Trent Dilfer, perfection was ingrained into the native Hawaiian since childhood.

Having to be laser focused on every throw, every read and every motion was critical in his upbringing, as Tagovailoa never taught to be an average quarterback. He was pushed to be exceptional, elite and for some, a once in a generation talent at all levels of the game.

As happy as the ride home was after winning the 2017 College Football Playoff National Championship, watching Clemson celebrate a championship and seeing the mistakes he made was a shot to his heart. Tagovailoa is about fun and making his teammates better, but is also about winning and hoisting the CFP Trophy as the No. 1 signal-caller for the Crimson Tide.

He is once again off to a remarkable start, completing 42 of 55 passes for 563 passing yards with seven touchdowns to no interceptions.

The former five-star chimes in with 281.5 yards passing per game (average) and a passer rating of 204.34; nevertheless, he took the blame on himself – upon being asked if he agreed to what Nick Saban said on the passing game being ‘sloppy.’

Tagovailoa said the next stage of his develop is making sideline adjustments.

“What’s embedded in me is things we worked on in practice throughout the week and you end up doing something different, just having it in the back of my head like ‘this might come back up again’ so, having this in the back of my head mentality. That is not how I approached the last game and I need to do a better job of that.”

He spoke on a couple of situations that were open and he did not take advantage of versus the Aggies — including his decision to run for a 25-yard touchdown, instead of locating receiver Henry Ruggs on a seam route. Tagovailoa said the offense worked on numerous pass patterns all week in practice, but he chose to pull the ball down rather than performing the adjustment.

He will have an opportunity to run a crisp offense this week, yet it will be against a tough conference opponent in South Carolina. The Gamecocks return much talent on defense and the players take after the demeanor of its aggressive head coach, Will “Boom” Muschamp.

Tagovailoa must take advantage of each option.

Christian Lewis is a name to watch out for
TDA projects four defensive stars for UA as first-rounders for 2020 NFL Draft
To Top
%d bloggers like this: