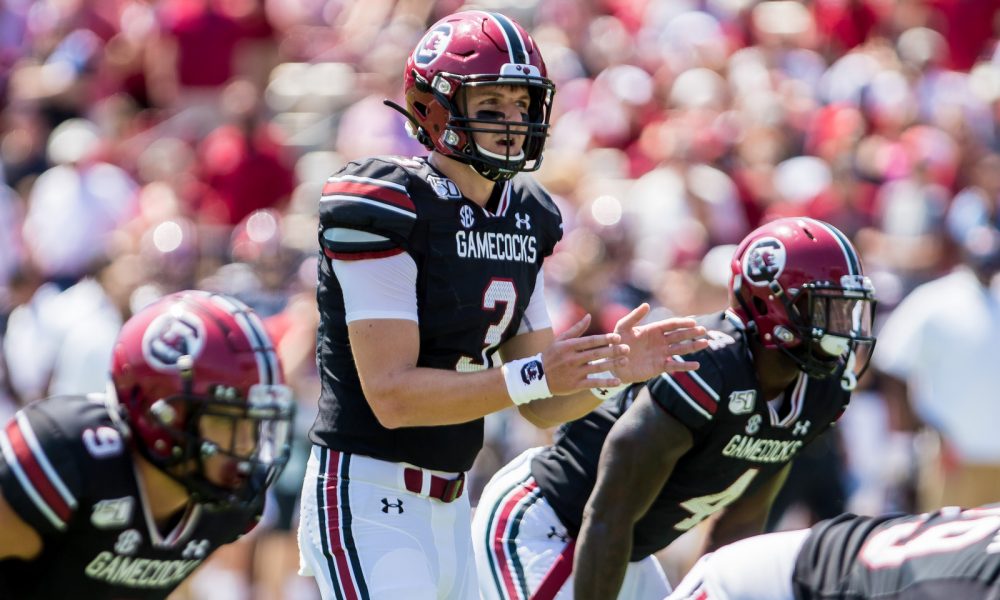 This year’s group of players could care less to comment on it, but Saban knows the dominance shown by South Carolina at home in a 35-21 victory in 2010.

Alabama had NFL talent all over the field that year; however, it was Steve Spurrier, Stephen Garcia, Alshon Jeffery and Marcus Lattimore that got the last laugh. Complacency set in during the matchup and it led to the Crimson Tide finishing the season at 10-3.

Times have changed since then.

The Gamecocks have a head coach in Will Muschamp, who is a former Saban assistant, and a group of seniors that want to end their career on a good note. During his presser on Monday, Saban brought up South Carolina’s special teams as one of the best units in college football.

Aside from its specialists, the Gamecocks have five players that will challenge Alabama offensively and defensively this weekend. All the individuals are listed below.

South Carolina would much rather have Jake Bentley, but Ryan Hilinski did his best in pleasing fans on last week. The California native played “flawless” per Saban, as he completed 24 of 30 passes (80 percent) for 282 yards with two touchdowns in a 72-10 win over Charleston Southern.

Despite it not being of the same caliber as Alabama, Saban said Hilinski did not look like a true freshman last week and that South Carolina ‘has not missed a beat.’

He was regarded as a prostyle quarterback as he posted 8,102 career passing yards with 85 total touchdowns in his tenure.

Hilinski will face a defense filled with pass rushers, ball-hawking defensive backs and players that feast on mistakes made by an offense.

He must protect the football, manage the game and keep the Gamecocks in position to win.

He is a highly productive running back in the Southeastern Conference, but playing at South Carolina does not provide Rico Dowdle with enough attention.

He leads the team with 149 rushing yards and two touchdowns on 21 carries. The senior is averaging 7.1 yards per carry and 74.5 yards per game. Dowdle is physical in between the tackles, while possessing a burst on runs to the outside. He turned in 654 yards rushing last season with four scores on 123 carries.

The combination of he, Kevin Harris, Tavien Feaster (transfer from Clemson) and Mon Denson will take a lot of pressure off Hilinski under center.

Some analysts under value South Carolina’s receiver room in the loss of Deebo Samuel; however, Bryan Edwards is no joke. At 6-foot-3 and 220 pounds, the senior can box out defensive backs and bail out quarterbacks with strong catches.

He shares the team lead in receptions (six) this season and has 119 yards with two scores on 19.8 yards per catch.

Edwards finished second in receiving in 2018 with 846 yards and seven touchdowns. The Gamecocks also have Shi Smith and Kyle Markway (tight end) that are both efficient weapons in the passing game.

This is the leader on defense for South Carolina.

T.J. Brunson currently shares the team in tackles (13) and he filled out the stats sheet last year with 106 total tackles – including a team-high 10.5 for loss and four sacks.

The senior at middle “Mike” linebacker captains a unit that’s allowed 17 points per game through two matchups and looks to make things difficult for Tua Tagovailoa and Alabama’s high-powered offense.

The 6-foot-1, 240-pounder has Ernest Jones and D.J. Wonnum helping him out as secure tacklers and edge rushers. Jones, like Brunson, has 13 tackles and Wonnum leads the team in tackles for loss with three.

He is the Gamecocks’ big-time inside pass rusher.

Javon Kinlaw will be playing on Sundays, like Brunson and Wonnum.

He has five tackles thus far, including two for loss and a team-high two sacks.

Alabama’s offensive line will have a huge task in trying to neutralize his penetration, in order to set up opportunities for its running backs.

Overall, South Carolina enters this contest on the heels of a 7-6 campaign last season.

Offensively, the Gamecocks are averaging 46 points and 522.5 yards per game. This will be a good first test for the Crimson Tide in a hostile environment at Williams-Brice Stadium.