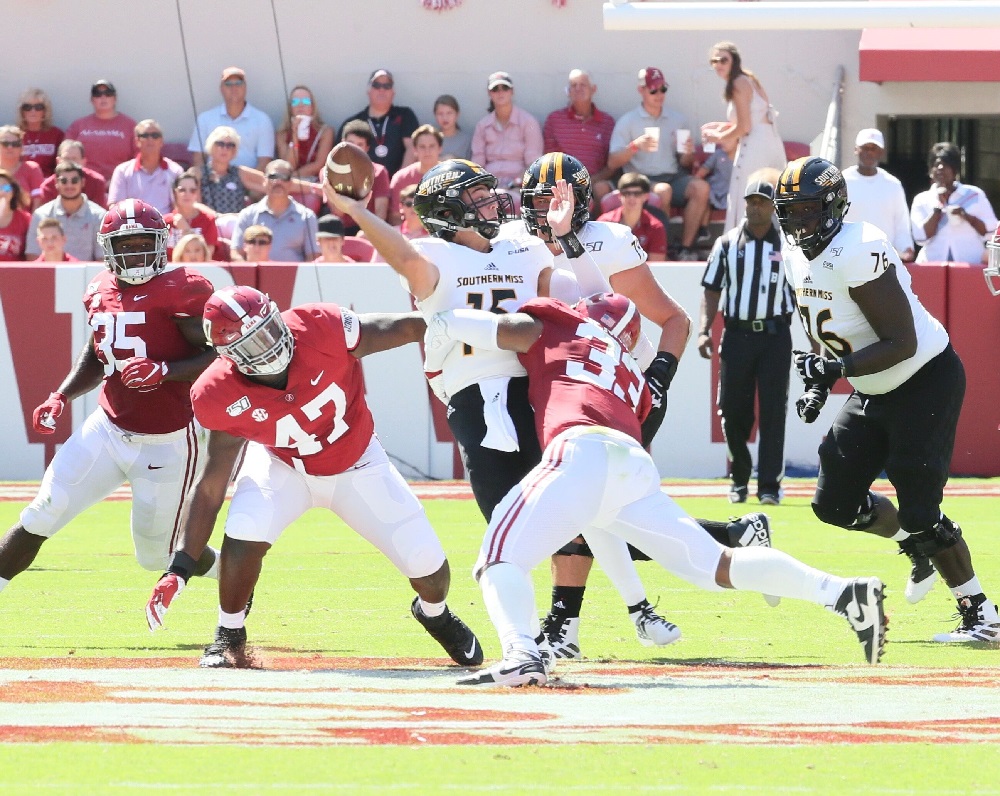 Did Auburn’s Kevin Steele, a former Alabama coach, expose LSU to help Alabama devise a gameplan of their own? Read and see why we think so.

LSU is the nation’s number one team, but they have some chinks in the armor and Auburn, with a first year quarterback and a good defense, both showed that they were almost capable of beating this LSU squad.

]n the case of the Auburn game, had they had say, a Heisman candidate quarterback to go along with that good defense, it seems obvious that they could have won their game against Auburn. Those War Eagles showed a clear path to victory from a defense standpoint. Auburn held LSU to about half their season average in scoring and showed LSU’s problems in the red zone when they tried to run it in.

So what did Auburn expose? That LSU’s vaunted secondary has some major weaknesses in it, but they lacked a quarterback who could exploit it. Tagovailoa or for that matter, Mac Jones, may not have problems hitting open receivers.

Auburn running back D.J. Williams gashed LSU for a 70 yard run ending the night with over 130 yards and he sure is no Najee Harris or for that matter a Brian Robinson. Alabama could really make some hay with the running game and the longer they make those scoring drives, the less time the LSU offense has time to score themselves.

In the first drive of the game, Auburn sacked Burrow and it shook him, they went three and out after he missed a third down conversion pass to Chase.

In the second LSU drive, they were moving the ball and got to the Auburn 29, but once again Auburn sacked Burrow and he got shook and couldn’t finish the drive and was sacked again after looking shaky following the first sack at the 29.

In their third drive, Auburn once again sacked Burrow and would have forced another three and out, but when Burrow couldn’t find a receiver on third and long, he ran 14 yards for a first down. With no further sacks or hurries, Burrow moved them down for their first touchdown.

In the fourth drive of the first half, LSU moved the ball mostly with the run with two short passes and got the ball once again to the Auburn 29. Then after two pressured incompletions a third and one quarterback sneak left them with a fourth and one and once again Burrow couldn’t convert it.

In the fifth drive, LSU was moving the ball, but following a sack, things went sour and they had to settle for a field goal and so ended the first half.

You can see that when Burrow is sacked, and he was sacked in almost every drive of the first half, that things just didn’t go so well for the rest of the drive.  The LSU offensive line had big problems stopping the Auburn pass rush and Alabama has yet to show what imaginative pass rush stunts they’ve devised for this season. They haven’t needed to show that part of their defense yet.

The measly 10 points that LSU scored in that half was far below what they have done all season long. Kevin Steele, Auburn’s defensive coordinator and former Alabama defensive coordinator, had devised the right game plan to keep the high powered LSU offense on low power and low production.

The second half was much of the same with the might LSU offensive drives going, punt, downs, interception, TD, TD, punt, punt, punt. When it was over, a team that had heretofore averaged over 44 points per game was held to 23.

Alabama with a backup quarterback put up 48 points in just over two quarters last week. Can you possibly see a scenario where LSU only scores 23 against Alabama and wins? Not to a team that averages over 48.5 points a game and takes their starting QB out in the third quarter most of time.

Auburn has a decent group of receivers, but nothing like the starting group at Alabama and yet they still showed that they could get open when in one on one coverage. The problem was Nix’s inability to get the ball to them. In a one on one play with Tua throwing the ball, he’ll complete the ball almost 70% of the time.

Kevin Steele is a great defensive coordinator and he exposed to the rest of the football world just how to slow down that LSU offense and curb their point production. The only question is, can Alabama follow that plan?