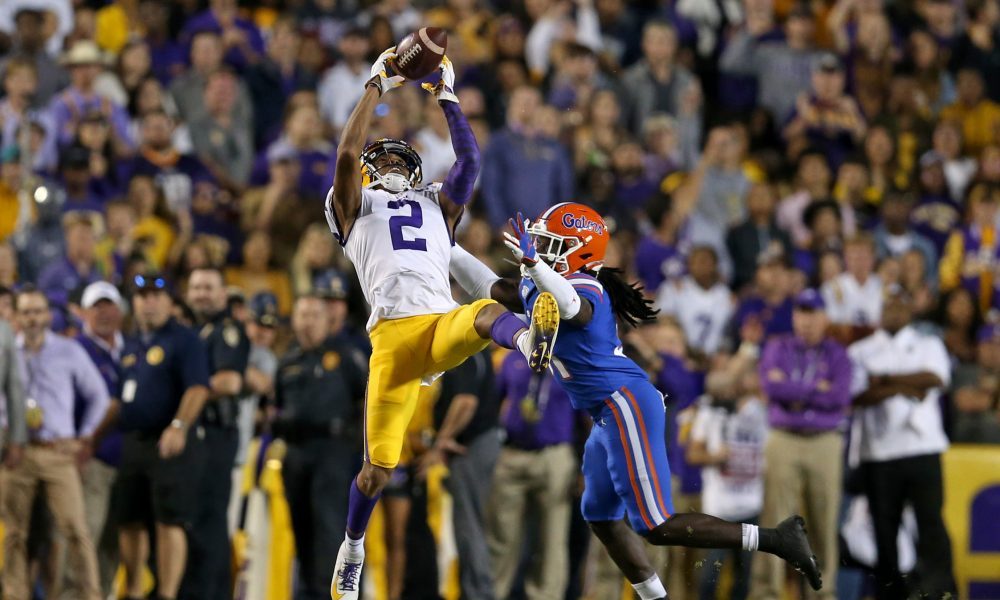 For the past two weeks, Joe Burrow and Tua Tagovailoa have dominated the conversation among the mainstream media outlets and for good reason. Both are Heisman Trophy candidates, both are potential top picks in the 2020 NFL Draft and both are gunning for a trip to the college football playoff. Yet neither one of them could have had the success they’ve had without help from their other offensive stars.

Alabama’s offensive firepower has been well documented throughout the season. Everybody knows names like Jerry Jeudy, DeVonta Smith, Najee Harris and Henry Ruggs but who are the ones that will be lining up against the Crimson Tide’s defense?

RELATED: Gary Danielson of CBS said Tua Tagovailoa is not ‘100 percent’ for LSU

Here’s your chance to find out.

By just watching two minutes of tape on Jefferson, you can tell just how important he is to LSU’s offense and Joe Burrow. Whenever there seems to be a bit of trouble the ball goes in numbers two’s direction and more often than not he makes the play. Jefferson has tremendous ball skills as he goes up and attacks the ball on jump balls and is able to real in passes in traffic. Jefferson is also famous for the”We’re going to come for their heads…” quote from a week ago which some members of the Crimson Tide may take exception to. Nonetheless watching Jefferson line up against Trevon Diggs on Saturday will be an absolute treat.

Chase is the Tiger’s deep threat who is capable of taking any pass the distance and he displayed that talent against Florida a couple of weeks back. He caught seven passes for 127 yards and two touchdowns including a 54-yard score which iced the game. Something else to keep in mind from that game was the struggle Florida had in successfully tackling Chase who slipped out of their grasp on multiple occasions. Chase also has great instincts on intermediate routes over the middle of the field. He does a great job of finding holes in the defense and beating his man to the football.

The 5’8″ running back has come up big all year for the Tigers by being the main man out of the backfield. Running back is easily the thinnest skill position on the offense but that isn’t quite saying much when looking at the big picture. But that only credits Edwards-Helaire for being the bell cow of the team. What’s most impressive about the junior is that he has his best games against the best competition. Against Texas, Florida and Auburn Edwards-Helaire has rushed for 357 yards, four touchdowns and averaged 7.1 yards per attempt. Alabama’s run defense has not been the same as years past so LSU may look to feed Edwards-Helaire early to help open up the passing game.

Although his stats don’t pop off the page quite like his teammates, it is not a true indication of Marshall’s talent. Yet another player on LSU’s offense who can make a number of difficult catches, if not for a different number you may mistake Marshall for Jefferson. Physically he has all the gifts to take over a game and has shown flashes of what he will become when his position isn’t as crowded. Regardless, Marshall may be the one who needs to step up the most for the Tigers this Saturday, especially if his fellow receivers are occupied by Diggs and Patrick Surtain II.