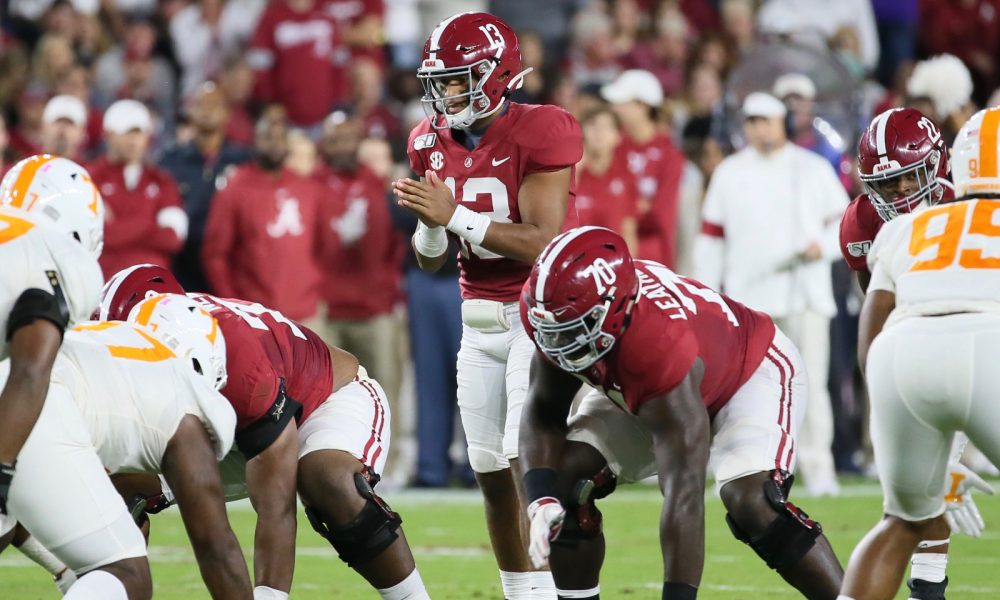 The second most important player is offensive tackle, Alex Leatherwood.

Before they would get selected in their respective NFL Draft classes, players such as Andre Smith, James Carpenter, Barrett Jones, Cyrus Kouandjio, Cam Robinson and Jonah Williams all knew the importance of excelling at left tackle when Alabama played LSU in early November.

RELATED: Ty Perine, No. 3 impact player for Alabama versus LSU

They knew the amount of professional scouts that would attend the game; however, they also understood the importance of what the matchup meant. With the exception of the Smith, the players listed all contributed to at least one national championship for the Crimson Tide.

Alex Leatherwood, a junior, will have his moment on Saturday.

He is the second most important player for Alabama, due to how he must perform with Tua Tagovailoa returning from ankle surgery.

The 6-foot-6, 310-pounder has had a great year, as he has not allowed a sack, quarterback pressure or quarterback hurry through eight games.

He was perfect on assignments in 48 snaps versus Arkansas and anchors a group that’s surrendered just nine sacks in 259 pass attempts (one sack in every 28.7 or 29 passes).

Leatherwood is one of the leaders behind the No. 2 scoring offense (48.6 ppg), No. 5 passing offense (338.6 ypg) and No. 9 total offense (506.6 ypg) in college football. He has assisted Tagovailoa to 27 touchdown passes to two interceptions – prior to hurting his right ankle.

Even without Michael Divinity Jr., LSU brings two edge rushers in the contest that command attention.

K’Lavon Chaisson (sophomore) and Jacob Phillips (junior) are both planning on coming after Tagovailoa from the linebacker position.

Chaisson has the body type of former Alabama standout, Tim Williams at 6-foot-4 and 250 pounds. He accounts for 4.5 tackles for loss, two sacks and a team-high four quarterback hurries.

Chaisson got the critical sack of Florida’s Kyle Trask in helping the Tigers earn a 42-28 win at Tiger Stadium on Oct. 12.

Phillips, who stands at 6’4” and 233 pounds, has four tackles for loss, one sack and three quarterback pressures. He has a tendency of timing the moments when he comes on a blitz.

Leatherwood must be aware of whomever comes off his side.

If he can quickly establish his base, keeps his hands and feet active and neutralize the edge rushers, Tagovailoa will have time to turn in a strong performance. Along with this, Leatherwood will be depended upon to open the rushing attack.

Najee Harris has gotten stronger throughout the season and is itching for a 100-plus yard effort versus the Tigers. Whoever breaks the century mark in rushing between Harris and Clyde Edwards-Helaire of LSU will win the game.

Harris is in search of a fourth big outing.

All in all, this is also a game for Leatherwood’s draft stock. He sits as a fringe first-rounder; however, a marquee output will make him a concrete first-round talent.

He is the next big name for offensive tackles and the native Floridian looks to deliver the goods at Bryant-Denny Stadium.

Gary Danielson of CBS Sports weighs in on Tua Tagovailoa, says he’s ‘not 100 percent’
Who are the other big weapons on LSU’s offense?
To Top
%d bloggers like this: