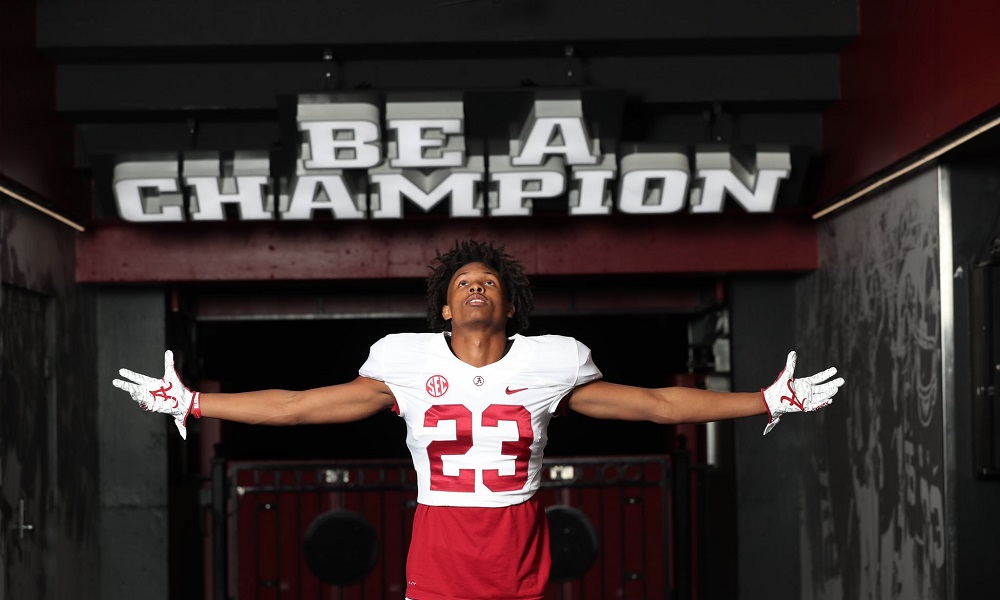 The Crimson Tide hosted their 4-Star defensive back commit, Jahquez Robinson, for his last official visit before signing with the Tide in December on last weekend, which gave the 4-Star recruit a chance to take a deep look at the Tide’s program as a whole.

THE University of Alabama! Official visit went great on to the next step… #Rolltide 🐘 @RTRnews @BryantDenny_UA pic.twitter.com/WzDNLfRbY9

Robinson is a product of Sandalwood High School in Jacksonville, Florida. He has shut down his recruitment 100 percent and is locked in with Alabama. The Florida product said the visit allowed him to connect with several members of Alabama’s program.

“The visit went well,” Robinson said. “I got to spend a lot of time with coach (Nick) Saban, me and my family. I got a chance to talk with coach (Karl) Scott and spend some time with the players and connect with them more than ever.”

The time Robinson spent with Alabama’s current players gave him an opportunity to catch the vibe of the Tide’s roster. The bond inside Alabama’s locker room among their players really stood out to Robinson.

“They were a lot tighter than I thought they would be,” Robinson said. “I thought they were going to be just individuals, but they are close. They have a real bond and they say they built it in practice and they practice hard. They told me practice is usually harder than the game.”

Saturday was Alabama’s senior day and Robinson got a chance to see Alabama’s seniors celebrate their last home game against Western Carolina. The atmosphere at the game was not the same as it would have been for a primetime SEC matchup, but the Tide’s fan support spoke volumes to Robinson. The support of the Alabama nation and the atmosphere for LSU-Alabama the weekend before has Robinson excited.

“The fans were crazy for the LSU game,” Robinson said. “The fans were in it and the LED lights were nice. The support that the fans have and show is amazing, especially when Tua Tagovailoa got hurt.

At the next level, Robinson will strive to be one of ‘the best defensive backs in the country’, and will also love to dawn the No. 23 to show respect to his cousin, Royale Williams, who lost his life to gun violence last year.

“If it is there, I will take it,” Robinson said. “Ever since it happened, I said I will rock No. 23 to commemorate him.”

Alabama will look to lock down most of its 2020 recruiting class in December and have secured Robinson’s pledge.

A 1-loss Georgia team is not better than a 1-loss Alabama team
Jackson Bratton named finalist for HS Dick Butkus Award
To Top
%d bloggers like this: