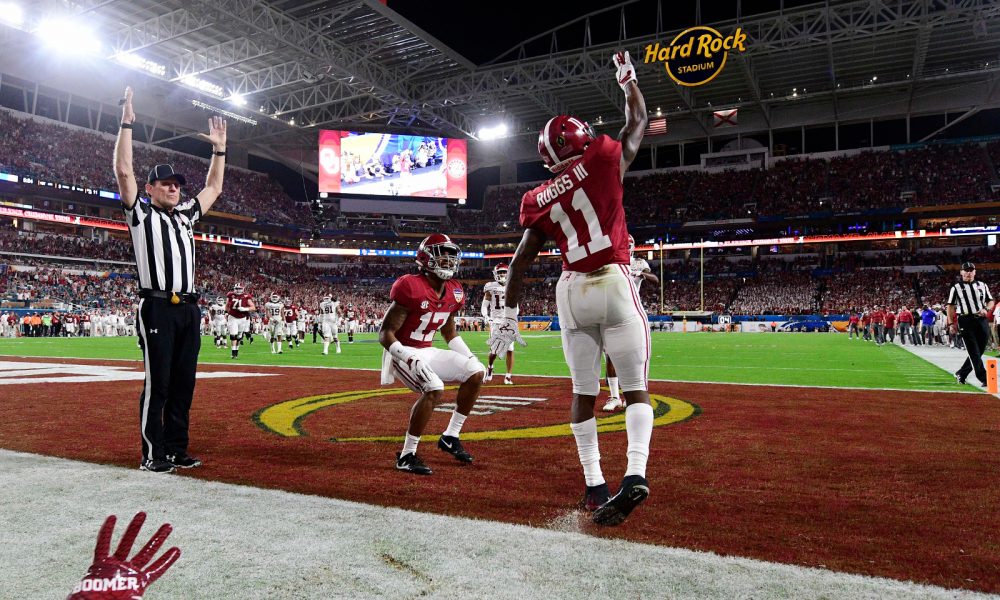 With the NFL Scouting Combine two weeks away, the next wave of talent is ready to impress coaches, fans and the league as a whole.

For the University of Alabama, it’s tied for third in sending the most players to the combine (10).

While many draft analysts expect the Crimson Tide to place five guys in the first-round, one will command full attention in the 40-yard dash.

Henry Ruggs III, a native of Montgomery, Ala., was a star athlete in football, basketball and track during his career at Robert E. Lee High School. He prides himself on having elite speed and in his three years at Alabama, he stood as the fastest player on the team at all positions.

RELATED: Tua Tagovailoa of Alabama could be cleared for football activities within a month

The 6-foot, 190-pounder totaled 98 career catches, with 24 resulting in touchdowns.

John Ross, an alumnus of the University of Washington, currently holds the fastest 40-time at 4.22 seconds at Lucas Oil Stadium.

According to Daniel Jeremiah, an NFL Draft analyst for NFL Network, he said Ruggs has “big time speed” and that the Nos. 4 and 2 will be in his time.

How fast will @__RUGGS run at the #NFLCombine? ?@MoveTheSticks | @AlabamaFTBL pic.twitter.com/9DxG3J0oto

Along with burning defensive backs at Bryant-Denny Stadium, racing with Jaylen Waddle has prepared Ruggs for this moment.

Both guys have gotten the better of each other; however, Ruggs has the edge. When it comes to his brothers at Alabama, the duo of Waddle and Tyrell Shavers made their predictions for Ruggs’ 40-time. Upon seeing the ideas of those two, Damien Harris (former Tide standout) weighed in on Ruggs. All eyes will be at Indianapolis (Ind.) for the week of Feb. 23 to Mar. 2, as the best players from college football will be evaluated for the pros.

A trio of teams – Saints, Eagles and Packers — are in need of instant offense at receiver and if Ruggs owns the 40, one of the three will make the move.