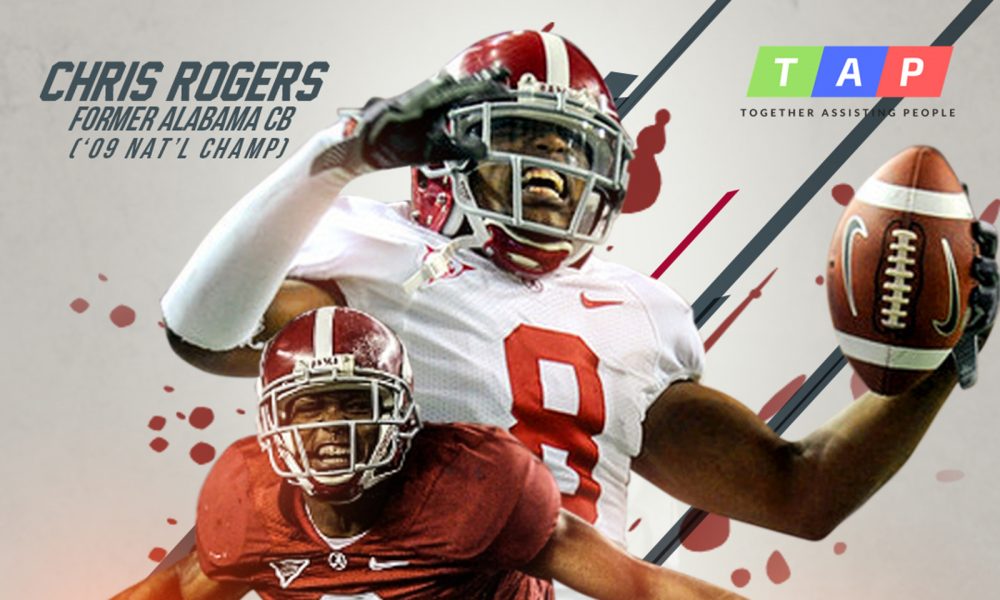 He was one of the reasons behind Alabama’s lone undefeated season under Nick Saban.

Chris Rogers was one of 14 recruits of the Mike Shula era that bought into Saban’s process and was a leader on the 2009 national championship team. A native of Lakeland, Fla., Rogers saw action in 50-plus games in his career.

After spending five years with the Crimson Tide (2005-09), he took his talents to the business and started the largest nonprofit organization in the state of Alabama. Together Assisting People or TAP is located in Birmingham and Rogers founded the organization in 2010.

He mentors young men and athletes across the landscape to be involved in more than just sports.

TAP is about fostering a community of people that give back to others and raise awareness on issues happening in the world. He has been steadily growing the brand through 10 years; however, Rogers has now taken steps to bring it to the masses.

On Monday, he joined yours truly of Touchdown Alabama Magazine via In My Own Words to relive the 2009 season and discuss where the Tide needs to improve on defense. Rogers also dives in to the aspect of mental health and how TAP is bringing awareness to it, in terms of athletes in the National Football League.

Check out the interview below.

VIDEO: Former Super Bowl champion sees Tua Tagovailoa as best pick of NFL Draft
Two underrated names on defense that look to break out for Alabama
To Top
%d bloggers like this: