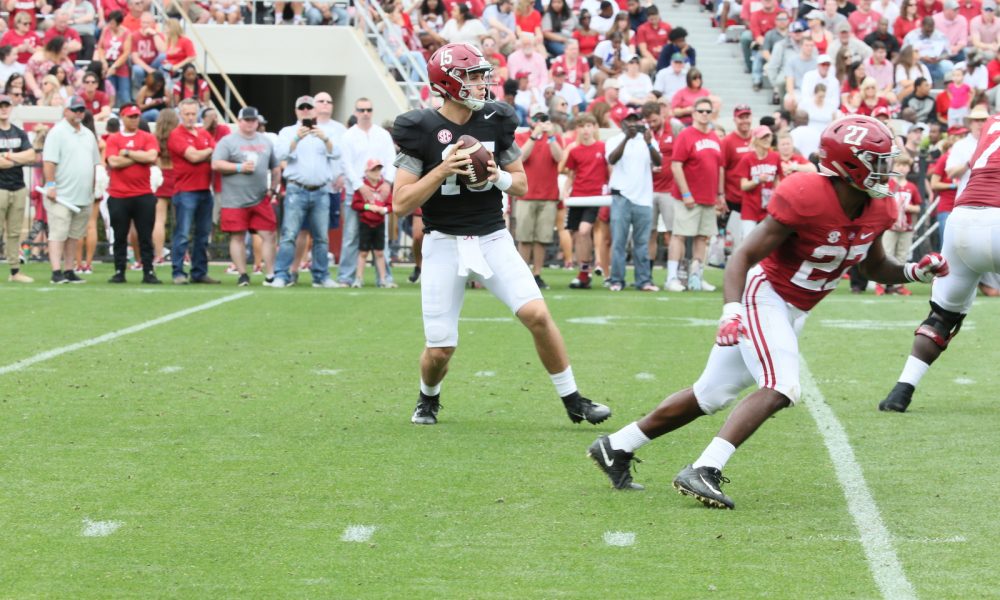 He comes from a family that thoroughly knows the history of Alabama football and importance of winning at the highest level.

Paul Tyson has been preparing for a chance to be the starting quarterback of the Crimson Tide since childhood and with his great-grandfather watching over him, Paul W. “Bear” Bryant had a feeling the moment would come at some point.

Major news hit the University of Alabama on Friday, as sophomore Taulia Tagovailoa entered his name into the NCAA transfer portal.

Fans of the Tide and college football have constantly been discussing the move and what it means for five-star freshman, Bryce Young.

As gifted as he is, Tagovailoa’s choice to leave has also opened the door for Tyson. The two four-stars in the 2019 class faced each other multiple times in high school, where they gave people a glimpse of Alabama’s future at quarterback.

RELATED: What does Taulia Tagovailoa entering the transfer portal mean for Bryce Young?

Tagovailoa came to the Tide with more fanfare than Tyson and while the latter redshirted, the native Hawaiian played in five games last year.

In the same way Mac Jones proved he was not an afterthought in 2019, Tyson eyes a chance to it this season.

He will get opportunities to run the offense under Steve Sarkisian and show everyone that is more than just the great-grandson of a legendary head coach. Tyson was a superstar at Hewitt-Trussville (Ala.) High School, leading the Huskies to the Quarterfinals of the Class 7A playoffs in 2017 and 2018. In his first year as a starter, Tyson guided the Huskies to an 11-1 season and was 19-5 as a starter for two years.

During his run, he threw for 6,580 yards with 69 touchdowns to 13 interceptions.

Under the guidance of Josh Floyd, Tyson made every single throw on the field. Upon studying the film, he connected with receivers on slants, post routes, comeback patterns, go routes, fade routes and stick routes among others.

He showed the ability to maneuver within the pocket and display accuracy on the run.

Tyson picked up yards with his feet – showing people he is more athletic than what he’s given credit for – and he is very precise when he climbs the pocket.

Not only is his anticipation strong, but there are four pro quarterbacks in Tyson’s game.

He has the size of Ben Roethlisberger, the arm strength of Philip Rivers, the accuracy of Drew Brees and according to former Huskies’ defensive coordinator Rudy Griffin, Tyson has the leadership traits of Tom Brady. He was selected as a first-teamer for Class 7A All-State in 2017 from the Alabama Sports Writers Association and also competed in the Elite 11.

“The departure of Taulia is huge for Tyson,” Griffin said. “There will be a game this season where Paul’s number is called and the rest will be history. All he needs is a chance.”

“Paul can absolutely sling it,” Mayden said. “If you just had him run the throwing drills, he would kill every one of them. He has a strong arm, like a really strong, accurate arm. The dude has a bomb of an arm. I saw him throw the ball 80 yards to a walk-on receiver in practice and broke the guy’s finger.”

With the offense he ran at Hewitt-Trussville, Tyson is more than capable of operating what Sarkisian would throw at him.

Now at 6-foot-5 and 235 pounds, he has filled out his body and looks like former Tide standout Jacob Coker. Coker, who led Alabama to a College Football Playoff National Championship in 2015, was a successful 3,000-yard (3,110) passer and ignited both his teammates and Tide fans with his ability to lower his shoulder and truck defenders.

Tyson has the same skill set.

He has done well with the sports performance team of David Ballou and Dr. Matt Rhea, and is ready to show what he has learned.

The conversation has been on Young, but Tyson continues waiting in the shadows and warning those to not overlook him.

He will play in the coming fall.