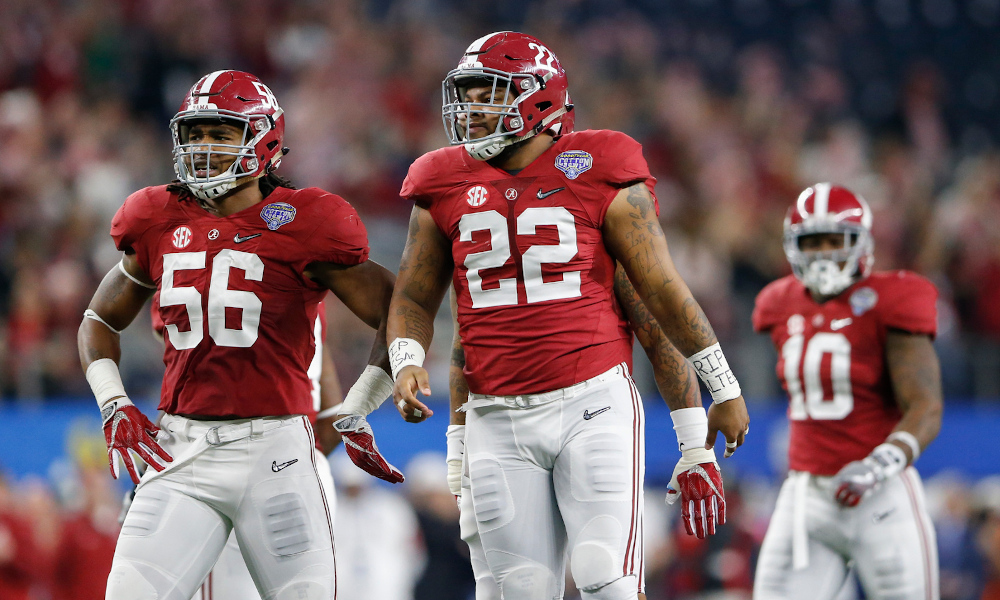 All eyes will be on a bounce back season for Alabama and while its five national championship teams under Nick Saban were strong, yours truly of Touchdown Alabama Magazine covered arguably the most exciting group that did not win a national title ring. The defenses the Crimson Tide boasted in 2009, 2011, 2012 and 2015 were all great units. Each one provided something different to the table and victory was the common goal; however, the 2016 team was unique.

Covering this defense was the equivalent of touring with the Jackson Five, watching music groups like U2, Pearl Jam, Nirvana and AC/DC in their primes, and in all of this, opposition was rendered helpless. ESPN replayed the 2017 College Football Playoff title matchup between Alabama and Clemson on Thursday, to the emotions of happy yet disappointed Tide fans.

Offensively, Alabama was great in 2016.

Jalen Hurts was a freshman phenom at quarterback, winning Freshman of the Year and Offensive Player of the Year in the Southeastern Conference. He took chances in the passing game under Lane Kiffin and the unorthodox play caller helped him flourish. The Tide had a 1,000-yard running back in Damien Harris and two other talented runners in Bo Scarbrough and Josh Jacobs. Calvin Ridley, ArDarius Stewart, Gehrig Dieter and O.J. Howard represented the quarter of receiving options, and Alabama had a solid offensive line in averaging 38.8 points per game.

Despite the production of its offense, Alabama carried the best defense of the Saban era, arguably the best Tide defense in school history and one of college football’s most dominant units in the 2016 season. The Tide was three-deep at each position and finished the year in the top-five or top-10 nationally in various categories.

To pair with the numbers listed above, Alabama’s defense scored at least one touchdown in nine of 15 games in 2016. Whether it was pick-sixes or fumble returns, the group had a passion for seeing each player reach the end zone and celebrate. Some of the best scoring highlights came from Eddie Jackson, Minkah Fitzpatrick, Ronnie Harrison, Ryan Anderson and Jonathan Allen.

As special as the defense and the team was, the question that people have a hard time answering is why did the 2016 squad for Alabama not win a national championship? Aside from a certain illegal pick play that Clemson ran with seconds left in regulation, the answer to the question is listed below.

If Nick Saban and Lane Kiffin would have worked through their difference, the 2016 bunch for Alabama has a championship. One can respect a person without liking them and this proved to be the situation between Saban and Kiffin. Saban was about structure. He cut and dry, he saw things in black and white. Kiffin, on the other hand, was a free spirit. He saw things in color and he was probably the lone coach under Saban that give his infamous “butt chewing” back to him.

Kiffin could hold his own and whether Saban respected it or was thrown off by it, fans believed Kiffin was helping the Tide’s offense thrive.

The Nebraska native worked magic with Blake Sims and Jacob Coker, and was starting to do the same things with Jalen Hurts. When he got nervous, Kiffin would get Hurts’ attention and kept in calm throughout possessions in games.

His less-than-stellar play calling bothered Saban against the Huskies.

Alabama won the game, 24-7, but it was Bo Scarbrough and the defense that got it done.

Even though Kiffin would land a head coach job with Florida Atlantic, tension was felt late in the season between he and Saban. Whether it was an off-field issue or the relationship ran its course, the talented offensive mind was not allowed to coach the CFP title showdown versus the Tigers.

This hurt Alabama’s defense as equally as its offense.

Deshaun Watson of Clemson had lost to the Tide in the previous and returned with an even better season. As much as the Tide contained him in the first half, Steve Sarkisian wasn’t ready to be the offensive coordinator on Jan. 9, 2017. He was trying to get over the physical, mental and emotion pain he suffered in being fired from Washington and USC, due to off-field issues.

The California native was able to have a fresh start in football again as an offensive analyst at Alabama. He was allowed to study game film, sit in on coaching meetings, provide ideas and break down tendencies of opposing teams; however, Sarkisian had no hands–on contact with players.

Lane Kiffin’s departure threw Sarkisian into action for the biggest game of the year.

He did not have the same effect Kiffin had on Hurts and after Bo Scarbrough suffered a knee injury, Sarkisian became a deer in headlights.

The Tide sputtered offensively, which led to its defense being on the field more than what it desired to. Alabama had seven three-and-outs on offense and helped Clemson gain momentum.

By the time Hurts finally scored a 30-yard rushing touchdown to ignite the crowd in the fourth quarter, the Tide had nothing left on defense.

Watson took the Tigers downfield and found Hunter Renfrow for the game-winning touchdown with seconds remaining in regulation.

Clemson got the 35-31 win at Raymond James Stadium (Tampa, Fla.), but so many Alabama fans believe Kiffin would have pushed the team to victory.

Not having your coaches on one accord is one thing, but losing two defensive leaders also hurt the Crimson Tide.

Alabama did not have its best middle linebacker (Shaun Dion Hamilton) or its instinctive safety (Eddie Jackson) against Clemson. Both players suffered season-ending injuries prior to the CFP.

Hamilton, who was looking like a first-round pick all year, injured his knee versus Florida in the SEC title game. He had 64 total tackles – including nine stops for loss, two sacks, one pass breakup, one quarterback pressure, one forced fumble and two interceptions through 13 games.

Jackson sustained a gruesome leg injury against Texas A&M at Bryant-Denny Stadium in the regular season. He, like Hamilton, was trending to be a first-rounder before the mishap.

Jackson had 24 total tackles, 2.5 tackles for loss, two pass breakups and one interception returned for a touchdown in eight games.

Having both players against Clemson would have been huge, but at least one would have sufficed.

If Jackson would have played, Alabama puts Minkah Fitzpatrick on Hunter Renfrow.

This becomes a more favorable matchup for the Tide versus having Tony Brown on Renfrow.

Brown was more of an intimidation tactic than a coverage cornerback and Renfrow aggravated him all game long.

The thing that hurts the most is Alabama had 21 players off the 2016 defense that were drafted to play in the National Football League.

Alabama players from 2016 defense that were drafted

Fitzpatrick was drafted the highest (No. 11 overall), but all five went first round. The only two that are not on their original teams are Fitzpatrick (Steelers) and Foster (Redskins).

One thing about the 2017 CFP Championship is that it’s tough to watch.

Saban could easily have eight national titles – including a three-peat in two different eras.

Should the 2016 team had won and given what we know about the 2017 bunch, Alabama would’ve had a three-peat in the CFP.

If only Saban and Kiffin could have held on longer, if only Scarbrough had not gotten hurt, if only Hamilton and Jackson did not suffer injuries.

These are all scenarios constantly playing on the minds of Tide fans.

It was a coaching dysfunction away from a title, but Saban is prepared for a rebirth and this season will be part one of it.

Move over MJ: A Nick Saban, Alabama dynasty documentary would be just as epic
Nick Saban’s lack of perfect seasons is glaring but easy to explain
To Top
%d bloggers like this: