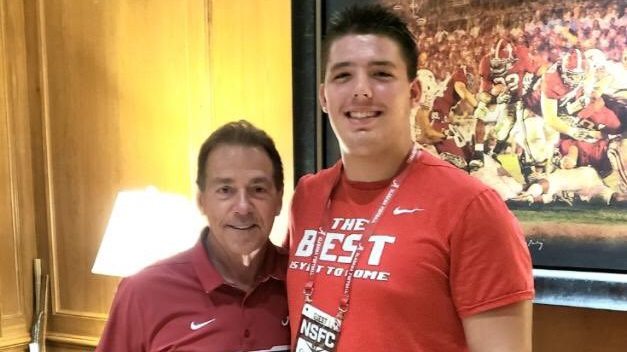 2022 4-Star offensive lineman, Addison Nichols, is at the beginning stages of cutting down his top schools’ list as he released a Top 12 Saturday and included the Crimson Tide.

Nichols is a product of Greater Atlanta Christian School in Norcross, Georgia. The rising junior is expected to be one of the top tackles in the nation during the next recruiting cycle. Alabama was included in his first cut because of their consistency.

“They are an overall fantastic program,” Nichols said. “Coach (Nick) Saban does an amazing job. He is consistent. I know if I choose to go there I can compete for a national championship.”

The Crimson tide offered Nichols in June of 2019 during an unofficial visit. Nick Saban got an opportunity to speak one on one with Nichols during his time in Tuscaloosa. The Georgia product said he really enjoyed the time he spent with Nick Saban.

“I like him,” Nichols added. “I had a great meeting with him the last time I was there when I got a chance to sit down and talk with him. I like how he thinks, how he runs things and how he pumps a ton of players in the NFL. I think it shows on the field as well. They dominate every year and are consistent.”

Nichols currently weighs 301 pounds and stands at 6-6. As a sophomore, he showed his ability to block down the field and his ability to zone block. Several of his opponents ended up on their back after going one on one with Nichols last season and he plans to leave several more in that same position this upcoming season.

“Last year, I played pretty good but with us playing against not really good teams, I would just hit a guy and put him straight in the ground,” Nichols said. “This year I want to hit him, take him 10 yards and put him in the ground, put some more effort into my game.”

There is still a lot for Nichols to sort out in his recruitment with him holding more than 25 Division 1 offers. However, he does know what he is looking for in a school.

“I want to get a good field of their academic program,” Nichols said. “I have not had a chance to check out Alabama’s in-depth yet, but I plan to do so. I want to go around to talk to students, players and professors. I also want to get the overall feel of the campus. I remember someone once asked me, When it is the spring and it is the off-season, what are you going to do? So, I want to be able to enjoy my time when I am not playing football.”