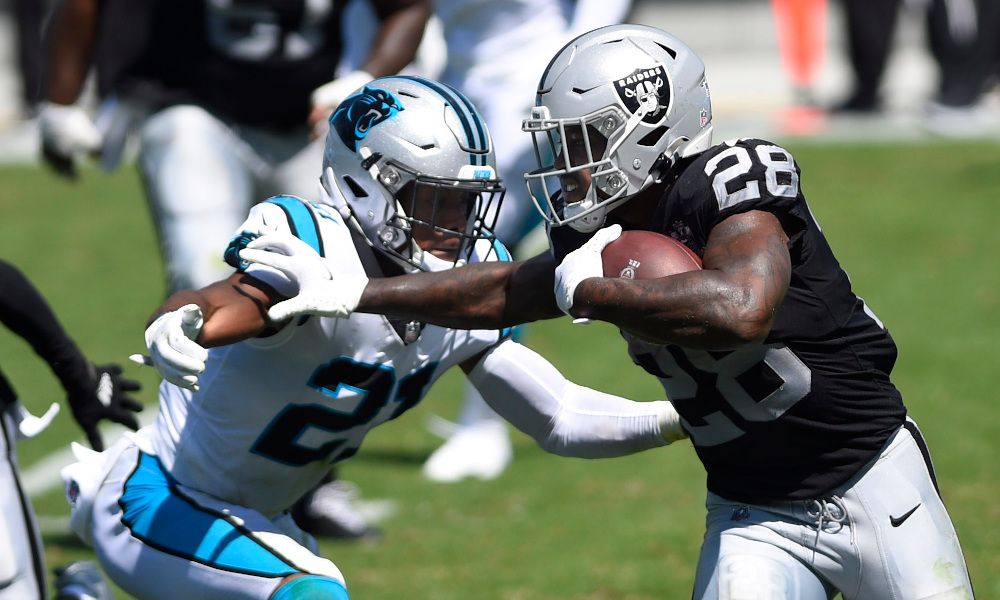 One of the best moves of Jon Gruden’s coaching career was getting Josh Jacobs.

He is one of three first-round running backs of the Nick Saban era from Alabama and after setting a franchise record for the Oakland Raiders with 1,150 yards rushing as a rookie, the No. 24 overall selection of the 2019 NFL Draft picked up where he left off in Sunday’s season opener against the Carolina Panthers.

Now the Las Vegas Raiders, Jacobs totaled 139 yards from scrimmage — including 93 yards rushing on 25 carries — with three touchdowns in a 34-30 victory over the Panthers.

Along with continuing to carry the load in the run game, Jacobs grabbed four passes from Derek Carr for 46 yards.

The 5-foot-10, 220-pounder scored the Raiders’ first touchdown, and then returned in the fourth quarter to recapture the lead from Carolina with his third score.

Jacobs collected five 100-yard games in 2019 and if not for a leg injury, he would have finished the season as the NFL’s Rookie of the Year.

He was big for the Crimson Tide in 2018, assisting the program to a Southeastern Conference Championship and a victory over Oklahoma in the Orange Bowl (College Football Playoff semifinal).

A native of Tulsa, Okla., Jacobs was on two SEC title teams and a national championship team with the Tide.

Despite the talent he is against in the AFC West, Jacobs will make the Raiders very interesting this season.