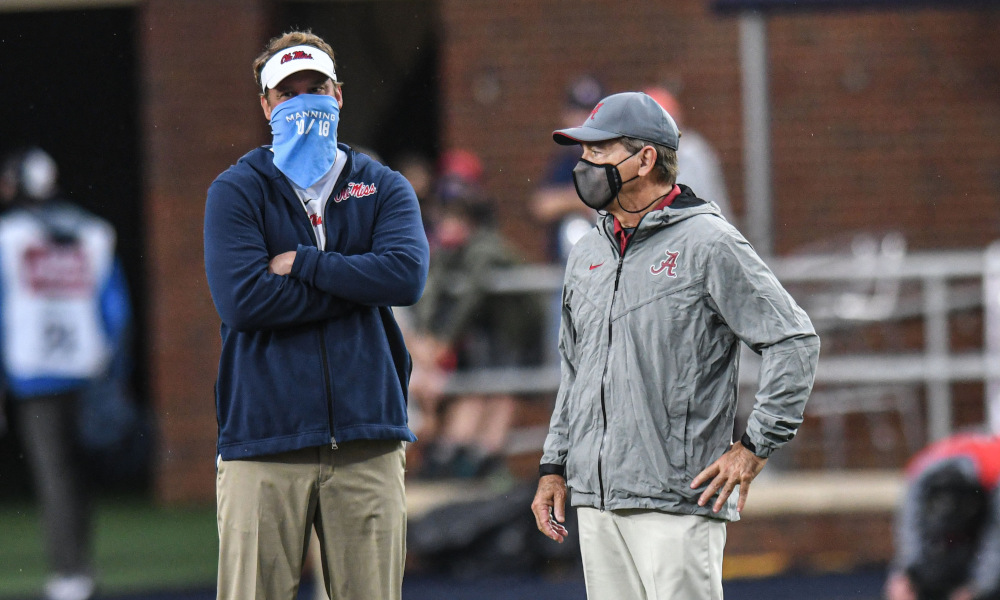 Lane Kiffin is something else on social media.

As the head coach at Ole Miss, he and his offense totaled 647 yards on a Nick Saban defense at Alabama. This is the third time in Saban’s tenure (14 years) that a team has totaled 600+ yards offensively against his defense. In joining Texas A&M from 2013 and Auburn from 2014, Mississippi also scored 48 points and boasted two 100-yard rushers as an unranked team.

With the frustration going on for the Crimson Tide, both Saban and Dylan Moses (Alabama’s middle linebacker) stated during post-game interviews that Kiffin had the Tide’s defensive signals. Prior to being a head coach at Florida Atlantic and Mississippi, he was an offensive coordinator at Alabama from 2014-16.

Moses said he ‘definitely’ believes Kiffin had the defensive signs.

“There were a lot of things we had to adjust to and like I said, it didn’t help that Coach Kiffin was our coach for like three years and knows the ins and outs of our defense,” Moses said. “So, there are a lot of things we need to change up… the signals and all that because I’m pretty sure they were watching it.”

When it came to Saban, he did not put it past Kiffin to have the signals.

Saban sees the talent and competitor Kiffin is, but the offensive tactician is not one for mind games.

FYI when u go as fast as we do we call our play first. Stealing signals wouldn’t help us at all because we are snapping the ball why they were still trying to just line up. #facts #ComeToTheSip ⁦@AlabamaFTBL⁩ go win the natty ⁦@OleMissFB⁩ https://t.co/6EvFe8PX4R

Whether he had signs or not, the Tide missed too many tackles and national media was amazed by how much Kiffin ran Alabama’s defense into the ground. He is back in the Southeastern Conference and Saban has to deal with Kiffin.

This is going to be a highly entertaining and controversial matchup for years to come.