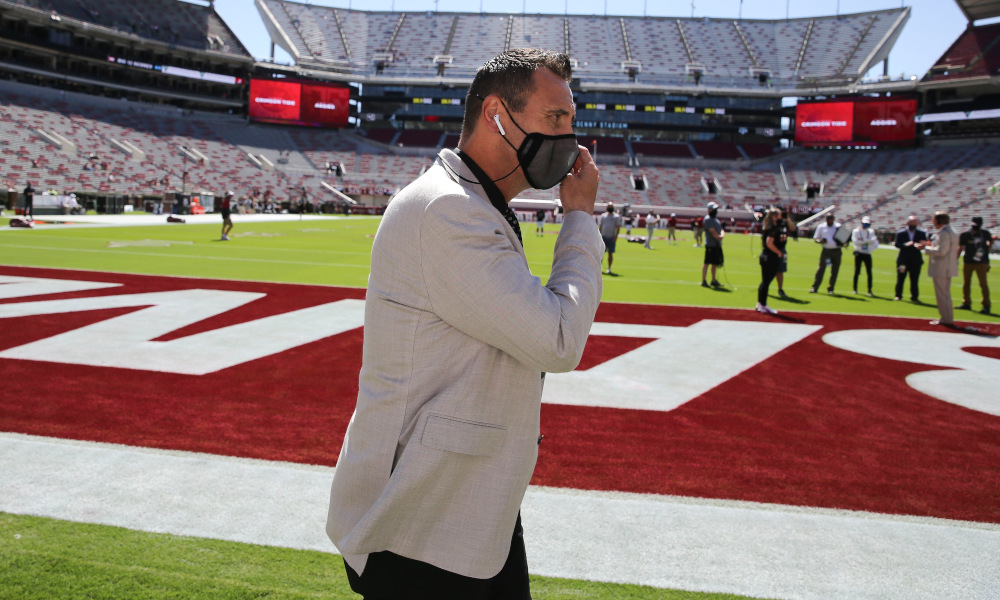 A lot of speculation is going on concerning Nick Saban’s opportunity to coach for Alabama against Georgia.

He has remained asymptomatic, despite receiving a positive test result for Coronavirus on Wednesday. Coach Saban appointed Steve Sarkisian to operate the football program as he works remotely; however, he hopes he can be at Bryant-Denny Stadium to coach the Crimson Tide. During his presser, he said the Tide had a protocol in place for all leadership coaches (including himself) on who would replace them in games if something were to happen. Saban does not know how everything will play out, so he has to go with the plan. When it comes to having a chance to communicate with the team from home on Zoom or any other virtual app, the NCAA prohibits the head coach of the home team in quarantine from doing it.

Regardless of this, there have been conversations on a solution for Saban to coach the game.

According to Heather Dinich of ESPN, she stated via College Football Live that if the six-time national champion has three straight negative PCR test — while remaining asymptomatic — he can leave isolation and rejoin the team.

RELATED: WATCH: Alabama’s run defense must lock in versus Georgia, if it wants a national championship

The question with that is how long would it take to get results back from two other tests?

I believe Nick Saban will be on the field coaching tomorrow. Enjoy your Friday.

Should this not be the case, Alabama players are already prepared to rally around Sarkisian.

He has been a head coach before at the University of Washington and University of Southern California, and Saban trusts him with this responsibility. After having some good and rough moments as the head man, this is an audition for Sarkisian to prove his ability to lead at the highest level. He has a chance to show what he has learned and the players are not going to let him fail.

A strong performance from him would land Sarkisian on the short list of coaches to potentially take over for Saban at Alabama.

On Wednesday, yours truly of Touchdown Alabama Magazine talked on the offensive coordinator via In My Own Words.

Be sure to subscribe to TDA on YouTube to catch the show every Monday, Wednesday and Friday at 6:00 p.m. CT.

﻿
WATCH: Alabama’s run defense must lock in versus Georgia, if it wants a national championship
Jahlil Hurley reacts to receiving an offer from Alabama football
To Top