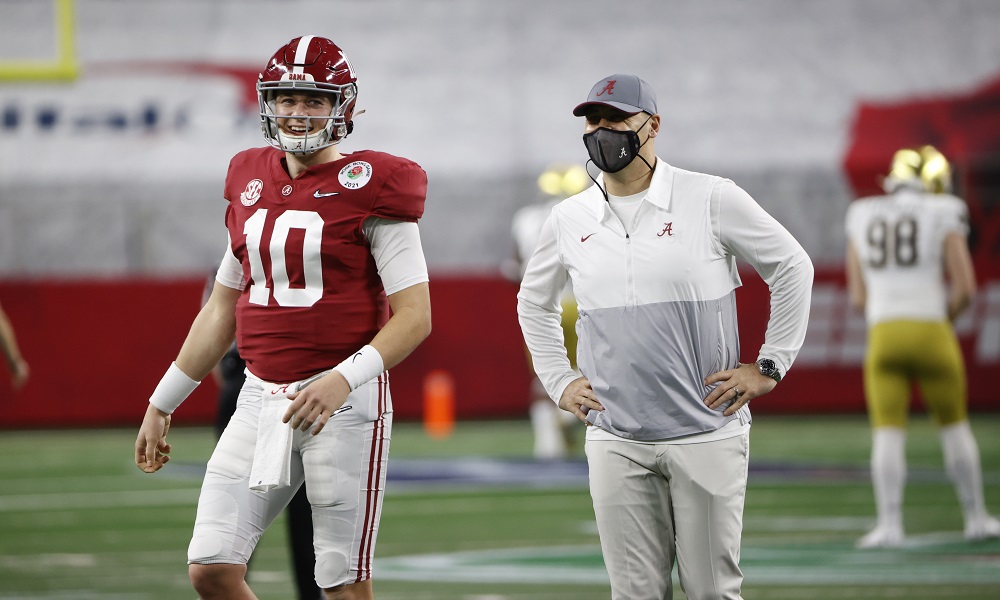 He has not held a national championship trophy since the end of the 2003 season for the USC Trojans, but that can all change for Stephen “Steve” Sarkisian on next week.

In two years at the University of Alabama, he has become the hottest name in college football.

RELATED: Nick Saban has had good success in championship games when his primary coordinator is leaving

As an offensive coordinator, he led the Crimson Tide to averaging 48.2 points and 535 yards per game — both of which are the highest of the Nick Saban era. Alabama scored at least 40 points in 10 games and of the ten Heisman finalists for this season, three come from the Tide’s roster.

Sarkisian guided the trio of Mac Jones, DeVonta Smith and Najee Harris to finish in the top-five of the finalist voting. When it comes to Jones and Smith, one of them will be Alabama’s third Heisman winner in its history.

After getting a 31-14 win over Notre Dame in the Rose Bowl, Sarkisian accepted a head coaching position for the University of Texas.

With the Longhorns cutting ties from Tom Herman, it feels as though Sarkisian will restore relevance to the program.

Although the news came at the worst possible time, Sarkisian began his opening statement for the Longhorns on how he is committed to finishing his responsibility at Alabama.

The 46-year-old owes it to Saban to give the game plan for the College Football Playoff National Championship matchup ample attention.

As the winner of the Broyles Award, which goes to the top assistant coach in college football, Sarkisian is locked in on winning his first national championship as a primary coordinator.

He has shown his savvy with quarterbacks at Alabama, as Jones and Tua Tagovailoa were both Heisman finalists.

RELATED: Will the news of Steve Sarkisian taking the Texas job be a massive distraction for Alabama?

On the heels of the native Hawaiian setting the school’s single-season record for passing yards (3,966) in 2018, Sarkisian mentored Jones into breaking the mark. A native of Jacksonville, Fla., the redshirt junior has 4,036 passing yards.

Jones is the first 4,000-yard passer of the Saban era.

Since the departures of Vince Young and Colt McCoy, Texas has lacked consistency and explosiveness at quarterback.

Sarkisian will use the contest against Ohio State to show the Longhorns that he’s the one who can get the right signal caller in, and restore the glory of the program. His play calling was conservative at times versus the Fighting Irish; however, expect to see him deep into his bag of tricks on Jan. 11. Sarkisian knows how potent Ryan Day, Justin Fields and the Buckeyes are on offense.

Ohio State dropped 49 points on Clemson in the Sugar Bowl and Fields had the game of his life with six touchdowns.

Sarkisian will find every way to attack the Buckeyes’ defensive secondary, as well as create opportunities for Najee Harris to pound its defensive front on the ground. He does not want to disappoint Coach Saban and he also wants to assure Texas that it made the right decision to hire him. Sarkisian has proven to be one of the best, if not the best assistant of the Saban era.

The last time the term “national champion” followed his hame, he was just a quarterbacks’ coach. Expect to see his absolute finest work against the Buckeyes.