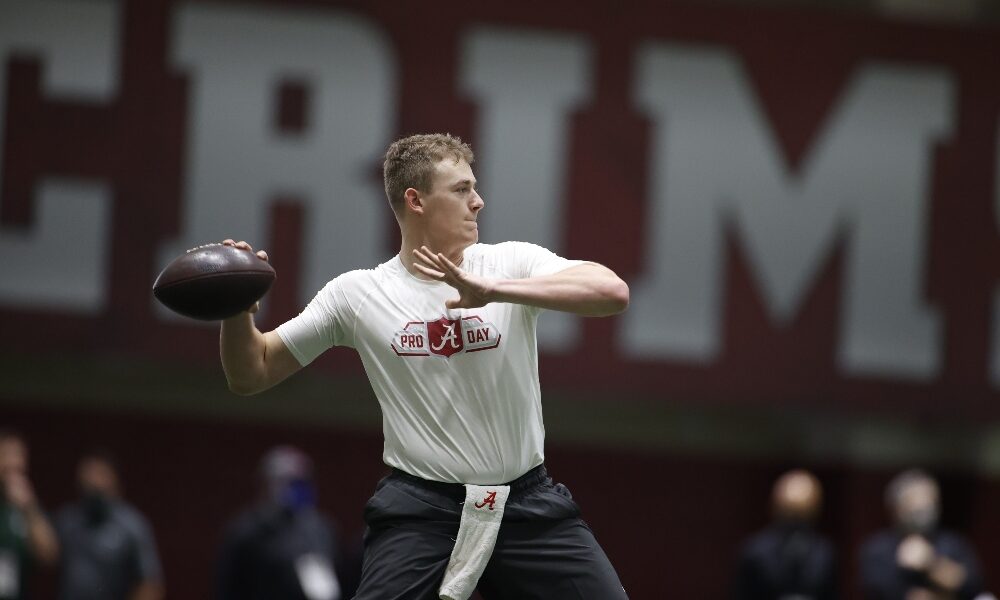 The San Francisco 49ers had a reason for trading up to the No. 3 overall pick for the upcoming NFL Draft.

As much as it respects Jimmy Garoppolo, the 49ers know he has only played one full regular season in four years. He has suffered some injuries and in 2019, he could not capitalize on a couple of plays — one pass in particular — that would have delivered the team a Super Bowl victory over the Kansas City Chiefs. San Francisco could have stayed with the No. 12 pick, but it traded up because it sees value in one of the quarterbacks in this draft. According to a report from Pro Football Talk, 49ers head coach Kyle Shanahan and general manager John Lynch are both interested in Mac Jones. Both guys will be at Alabama’s second Pro Day on Tuesday, as the former Crimson Tide signal-caller is scheduled to throw again. Jones guided the Tide to a Southeastern Conference title and a College Football Playoff National Championship during his lone season as a starter in 2020.

He led college football for passing yards (4,500), completion percentage (77.4), passer rating (203.1), and total quarterback rating (96.1) while tossing for 41 touchdowns. Jones, a native of Jacksonville, Fla., earned All-American honors and was a Heisman finalist. He won the Davey O’Brien National Quarterback of the Year award and was voted a permanent team captain by his peers.

Justin Fields of Ohio State is also scheduled to throw on Tuesday, but the 49ers want to look at Jones.

Most have compared Jones to Tom Brady, but he has the arm talent that resembles Matt Ryan.

In 2016, Shanahan was the offensive coordinator for the Atlanta Falcons. He coached Ryan to his first-ever MVP season, helping him record career-highs for passing yards (4,944), touchdowns (38), passer rating (117.1), and completion percentage (69.8).

Shanahan’s offense guided the Falcons to the Super Bowl; however, it suffered a loss to the New England Patriots.

He may potentially have his marquee quarterback in Jones.