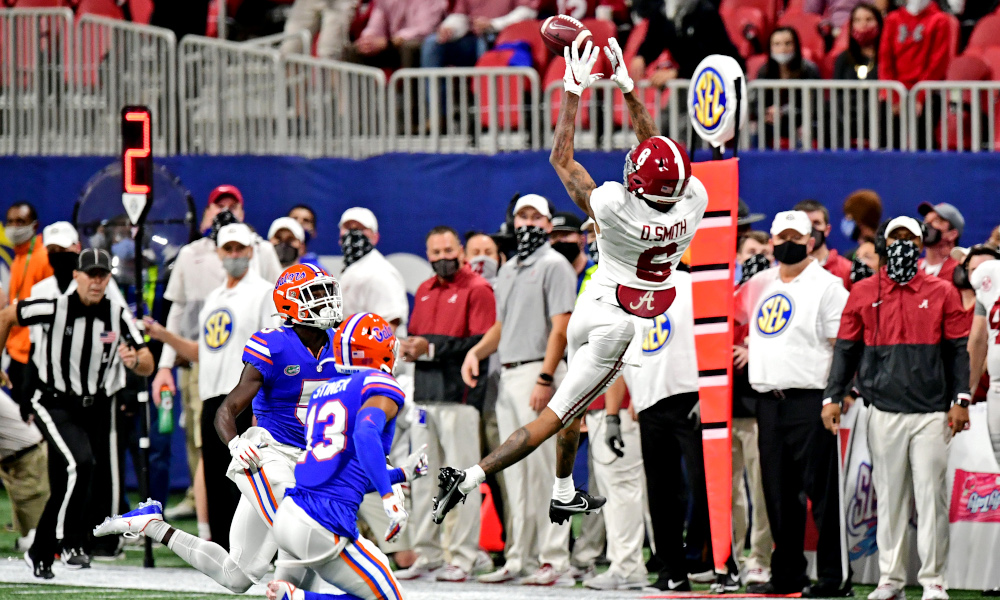 He worked with him for one season, but Dr. Matt Rhea knows the make-up of DeVonta Smith.

Rhea served as Alabama’s Director of Performance Science in 2020, and his methods pushed Smith to become the first wide receiver in school history to win the Heisman Memorial Trophy. He assisted the Louisiana native to be the Crimson Tide’s all-time career leader for receptions (235), receiving yards (3,965), and touchdowns (46). Rhea witnessed Smith lead all receivers in Football Bowl Subdivision (FBS) with 117 catches for 1,856 yards and 23 scores.

He dominated opposing defensive backs, won every major award, became an All-American, and was voted a permanent team captain. Smith does not speak much; however, his actions create a massive presence. After he was not expected to perform at Alabama’s second pro day, reports have stated he will run some routes for pro teams.

So a bit of a an update here. Smith has thrown with Mac Jones recently. His finger that he injured in the the National Championship still isn’t 100% and actually is still purple. But he wants to run a few routes today. So we may end up seeing him after all. https://t.co/SxC9jQuB2J

Many draft experts are knocking Smith for his small frame, but Rhea has a message for them.

He tweeted a video of Smith putting in work in the weight room. Rhea captioned the video stating: “there is a difference between being skinny, weak, fragile & being lean, strong, resilient, and TOUGH! Smitty has proven himself beyond doubt. Never missed workouts, always practiced, no excuses, full respect.

We have also seen former NFL greats, including Chad Johnson, speak in support of Smith.

They do not care about his size. All they want NFL teams to do is watch the tape. His work speaks for itself.

Smith is projected to go high in the first round of the NFL Draft.