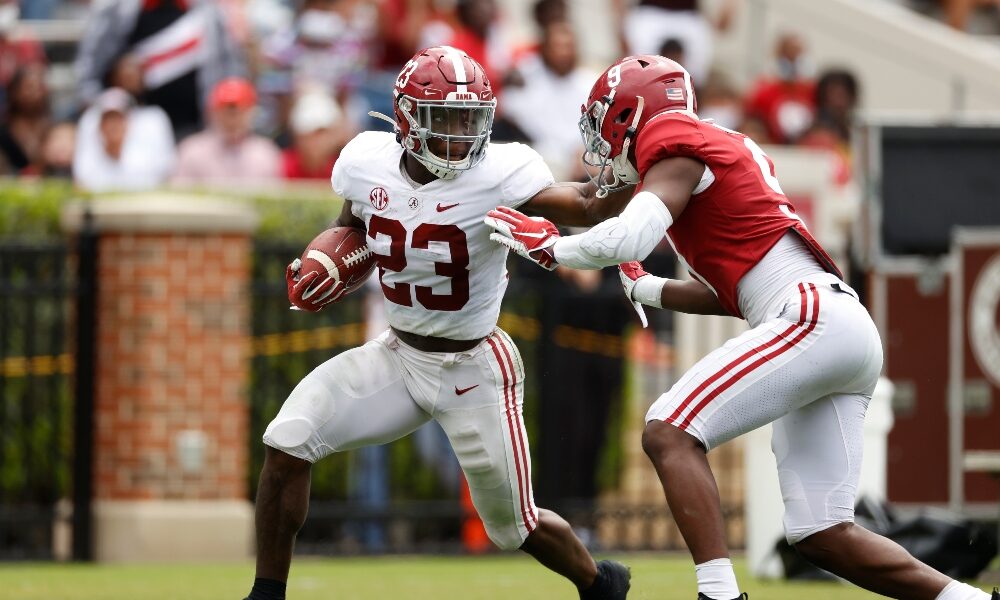 For the past two seasons, there has been one player leading Alabama out of the backfield in former star running back Najee Harris. As he became the school’s all-time leading rusher in 2020 it was evident that a rotation was not in the books for the Crimson Tide offense and even head coach Nick Saban eventually caught on.

Saban went on record numerous times in the past stating that Alabama put most of the workload on Harris’ plate because of his ability to get stronger as the game progressed.

Now that the Antioch, CA native is off to the NFL Draft, Alabama is likely headed back to a more traditional rotation of running backs to try and replace Harris.

Fortunately for new offensive coordinator Bill O’Brien, he has a myriad of talent to work with.

By simply looking at the stat sheet it wasn’t quite the amount of yards Alabama fans would be used to seeing out of its backfield. McClellan led the way as a part of team crimson with 46 rushing yards on 12 carries, but for him as well as Williams and Robinson the gains between the tackles for tough to come by due to the play of the offensive line.

Creating a dominant run game takes time and after losing three starters to the NFL and holding out Emil Ekiyor for the spring, the Crimson Tide’s offensive line is far from a finished product. But that didn’t stop the trio from showing flashes of toughness with the football and as the chemistry gets built upfront there will be more opportunity for big plays.

The aspect of the backs game that was not shrouded by a developmental line was all threes ability to make plays in the passing game.

This was evident right from the first drive of the game when Williams caught a pass from quarterback Bryce Young for a gain of 47 yards which set up a field goal for team white and went on to finish the game with four catches for 65 yards. McClellan was team crimson’s leader in total receptions on the day with seven while accumulating a total of 62 yards.

Robinson’s touches were a bit limited in comparison, but Saban shared his thoughts on his development earlier in the spring.

“He’s doing great,” Saban said back in March. “He’s got great speed. He’s gotten bigger and stronger. He’s really playing fast. He’s playing really good on special teams. He’s a potential kickoff returner for us. He was before when he was a freshman. So that’s certainly a role.

“And he’s made great progress as a running back. He’s got pretty good carryover knowledge and experience-wise from the year before. I’m really pleased with what he’s been doing.”

What also would be noted is that Alabama conducted A-Day without the likes of its second-leading rusher from a season ago in senior Brian Robinson Jr. and talented redshirt sophomore Trey Sanders.

Whatever combination O’Brien and Saban come up with this fall, the team will have a bundle of multi-purpose backs to choose from.