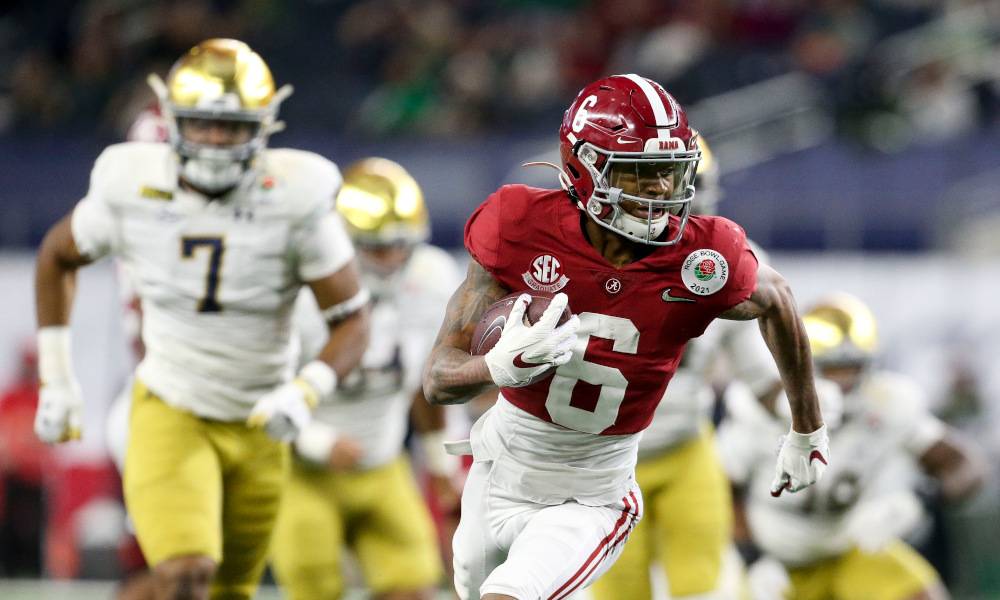 The obsession with Alabama wide receiver DeVonta Smith’s weight continued on Wednesday when his precise measurements were shared by Albert Breer, the discussion and debated resurfaced.

NFL teams didn't get athletic testing numbers from the Indy medical combine earlier this month, but they did get measurements. And that meant, finally, they got Alabama WR DeVonta Smith on a scale.

Coming in at just 166 pounds, many fans shared their concerns over his ability to translate to the NFL. But if there is one thing that Smith has proven over his four years at the University of Alabama it’s that his size doesn’t dictate his performance on the field.

Head coach Nick Saban shared that when he first arrived in Tuscaloosa he was roughly 155 pounds and was able to get up to 170 pounds, so putting on weight isn’t foreign to the Louisianna native.

Although he’d always been on the light side, Smith has been an issue for opposing defenses right from the get-go.

During his freshman season, Smith aided the Crimson Tide to a national championship win where he famously caught the game-winning touchdown on 2nd and 26 with a pass from Tua Tagovailoa.

After dealing with a few injuries during his sophomore season, Smith burst onto the scene in 2019 where he caught 14 touchdowns and posted 1,256 receiving yards. Following a season like that, Smith could have easily taken the next step on his path and head to the NFL.

Instead, he returned to Alabama for one last season and had one of the greatest seasons from a wide receiver in the history of college football.

He became the first receiver to win the Heisman Trophy since 1991 as he finished the season with 1,856 yards and 23 touchdowns on 117 receptions during a shortened season which ended with a second national championship win.

All of this success came while Smith was perceived to be a “small” wide receiver, yet never once was it an issue. Whether it was bigger defensive backs guarding him or multiple players on him he still found a way to get open and catch passes with defenders draped all over him.

Smith was also the Crimson Tide’s best blocking receiver, setting the edge during screenplays for his fellow teammates and setting up outside lanes for running back Najee Harris.

Obviously, he will need to put on some sort of weight to make it in the league, but those who are still hung up on his size going into the draft are likely overthinking things.