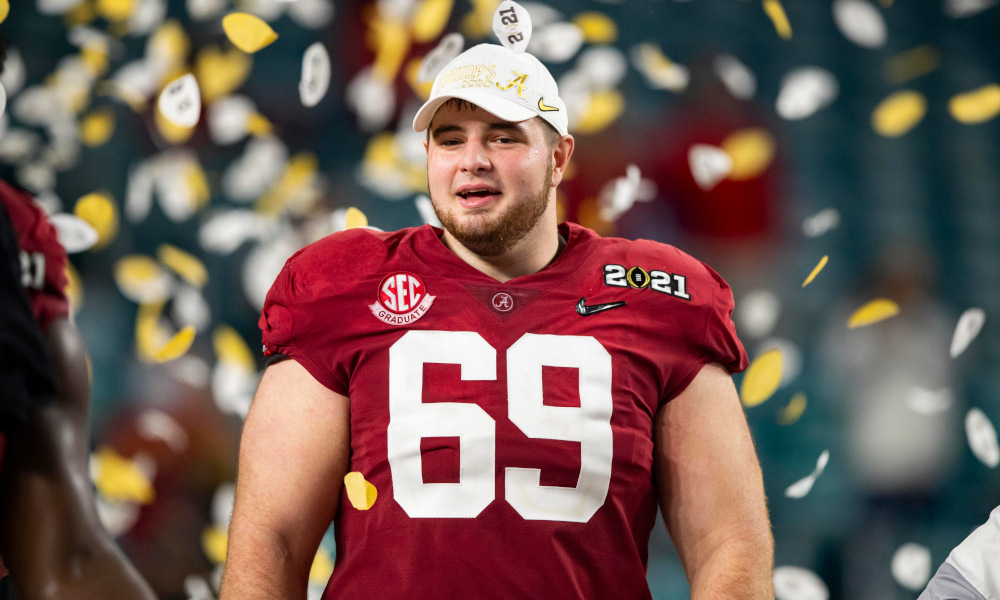 He is one of the main reasons why Alabama football had a perfect season in 2020.

Landon Dickerson brought the Crimson Tide’s offense together, and it helped it achieve success.

The protection he gave to Jones in the pocket allowed for Smith to become the first wide receiver since Desmond Howard (Michigan, in 1991) to win the Heisman Memorial Trophy.

RELATED: Nick Saban explains that “and” and “but” are the two most important words in NFL Draft evaluation process

The 6-foot-6, 325-pounder anchored the Tide’s offensive front at the center position and paced the program to a national championship.

Dickerson was also first-team All-SEC, Unanimous first-team All-American, and a permanent team captain. He put together a home gym for his teammates to train during the quarantine period of the COVID-19 pandemic; however, anonymous NFL Draft scouts decided to rip him in the evaluation process.

According to Marcus Mosher, a managing editor for The Raiders Wire (part of USA TODAY), he posted quotes from two pro scouts that were highly critical of Dickerson.

“Not a good athlete, on the ground a lot,” a third scout said. “I don’t like his stiffness. I don’t like this and that. But he’s a guy I want on my team. He’s my type of guy even when I look at him as an athlete. Fortunately, you’re not going to be able to work the guy out.”

Another scout said: “It’s a wonderful story … but he’s not that good.”

“He’s been hurt his whole life, and he’s limited athletically. “Does the guy have any talent? No. just a guy,” a fourth scout said.

Also, they did not see he was only hurt one time in two years at Alabama. D.J. Fluker, a former All-American for the Tide, came out in defense of Dickerson.

He is more Than just a guy he a stone cold baller! WHAT HE MEANT TO SAY IS HE IS THAT GUY THAT KICKS D-LINE TAIL🔥🔥🔥🔥

This reflects Nick Saban’s “and” and “but” statement. People are looking for every option to not draft Alabama players.

RELATED: 49ers are down to Mac Jones and Trey Lance for the No. 3 overall pick in the upcoming NFL Draft

Dickerson has not done anything for his work ethic to be questioned. He fits any locker room in the NFL, and teams would be happy to have him.

If not for an injury, he would be a first-round draft pick. He projects as a second-rounder for the event.

Dickerson is prepared to prove his critics wrong.