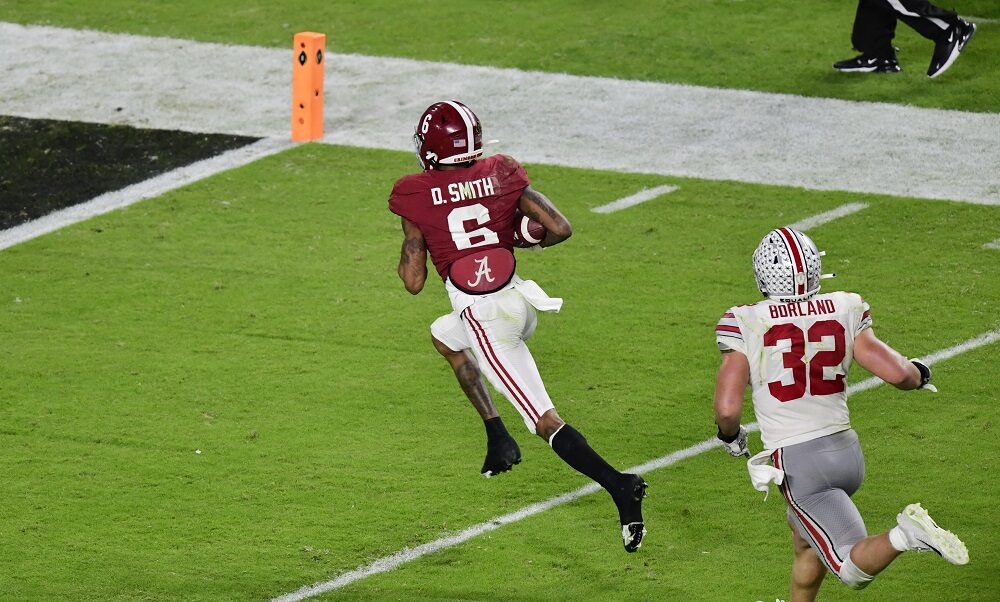 He will hear his name called early on Thursday night at the NFL Draft, but DeVonta Smith spent time on Good Morning Football and the Club Shay Shay podcast.

Smith has dealt with all the negativity about his small stature, and it does not bother him.

He dominated college football at 166 pounds and paced the University of Alabama to a national championship. He led all wide receivers in catches (117), receiving yards (1,856), and touchdowns (23) in 2020 while being the first receiver since Desmond Howard to win the Heisman Trophy.

RELATED: Mac Jones embraced the grind of going to Alabama, didn’t want to be ‘given the keys’

As the Crimson Tide’s all-time leading receiver, Smith told GMFB that he is not a bodybuilder.

“We play football. We in football business. We’re not weight lifting. We’re not bodybuilding. It’s football.”@AlabamaFTBL WR @DeVontaSmith_6 isn’t concerned about his weight at the next level 💪 (via @gmfb) pic.twitter.com/9B7wkeXj0f

“We play football. We are in a football business,” Smith said. “We are not weightlifting. We are not bodybuilding. It’s football. That is what we are here for. So, all the other stuff is irrelevant.”

The Louisiana native made his point last season, as he totaled nine 100-yard games.

He posted a trio of 200-yard performances, including an output of 215 yards and three scores on 12 catches in the first half of the College Football Playoff National Championship matchup versus Ohio State. Smith was the Offensive Most Valuable Player of the Game and set a record for most catches and most touchdowns. The majority of his production came in seven games (Mississippi State, Kentucky, Auburn, LSU, Arkansas, Florida, and Notre Dame) that Alabama did not have Jaylen Waddle on the field.

Things went to the fun side on the Club Shay Shay podcast with Shannon Sharpe.

RELATED: Legendary basketball analyst Dick Vitale says Mac Jones will be a version of Tom Brady in the NFL

The former NFL legend started the conversation by asking Smith to construct the perfect Alabama receiver. Afterward, he wanted to know how the projected first-round pick would spend his first check. In keeping true to form, Smith is taking care of both his parents. When it comes to himself, the two-time national champion is frugal.

He is sticking with his Nissan Altima and he’s looking into Pontiac Firebird for an old-school feeling. Sharpe laughed about the Firebird, but he wants Smith to spoil himself.

.@DeVontaSmith_6 on what car he’ll buy with his first NFL check:

“I’ve been looking into old schools and I want a Pontiac Firebird…But I’m keeping my Altima, it’s not going nowhere, it’s a gas saver.” pic.twitter.com/BT8XK2wE1Y

He will do it at some point, but Smith has always been a humble individual. It has been about his family and the community around him in Amite, La. He plans on bringing something special to his hometown soon. No matter what his size is, Smith has the biggest heart for the game.

He plays with toughness and is very competitive. He is going to perform well at the next level.