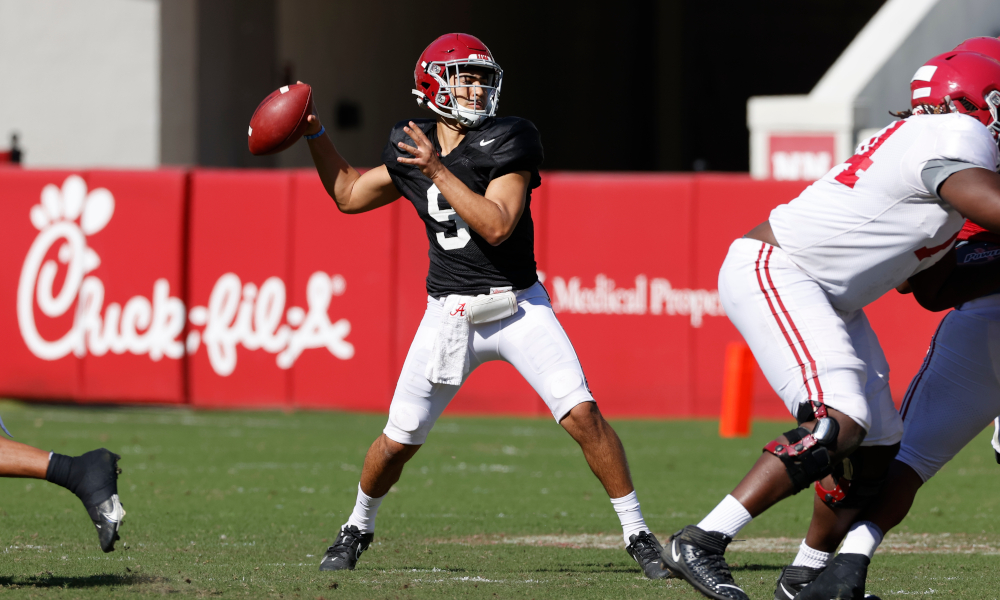 He has a lot of expectations on him, but Bryce Young has carried this since high school.

After observing Mac Jones last year, the sophomore is projected to be Alabama’s starting quarterback in the fall.

He arrived as a five-star prospect in the Crimson Tide’s 2020 signing class. The Coronavirus pandemic kept him from being an instant contributor; however, Young did play in nine games. He accounted for 156 passing yards with one touchdown on completing 13 of 22 passes.

A native of Pasadena, Calif., Young is faced with the task of helping Alabama repeat as national champions. It was fun to see Jones guide the team, but fans want to see if Young can do it with a new offensive coordinator.

He and Bill O’Brien hit it off well on A-Day, as Young was voted the Dixie Howell Most Valuable Player.

He completed 25 of 44 passes for 333 yards with one touchdown. The 6-foot, 194-pounder is back in California sharpening his skills. Young has been training with 3DQB, an Elite Youth Quarterback Training Facility. The company focuses on Bio Mechanics, Motion Analysis, and Pro-style quarterback training. It also teaches the mental part of the game and proper nutrition. Taylor Kelly, the Motion Performance Expert, has been with 3DQB for two years. He was a three-year starting quarterback at Arizona State University (2012-14) and is the quarterback’s coach at Mater Dei High School: the Alma mater of Young.

The site posted a video of Young going through his passing mechanics on Twitter.

3DQB has a clientele of the greatest quarterbacks in NFL history, including Tom Brady and Drew Brees. It has also worked with Super Bowl champions such as Eli Manning, Joe Flacco, and Carson Wentz. The group is getting Young ready to be a stud in the Southeastern Conference for years to come.