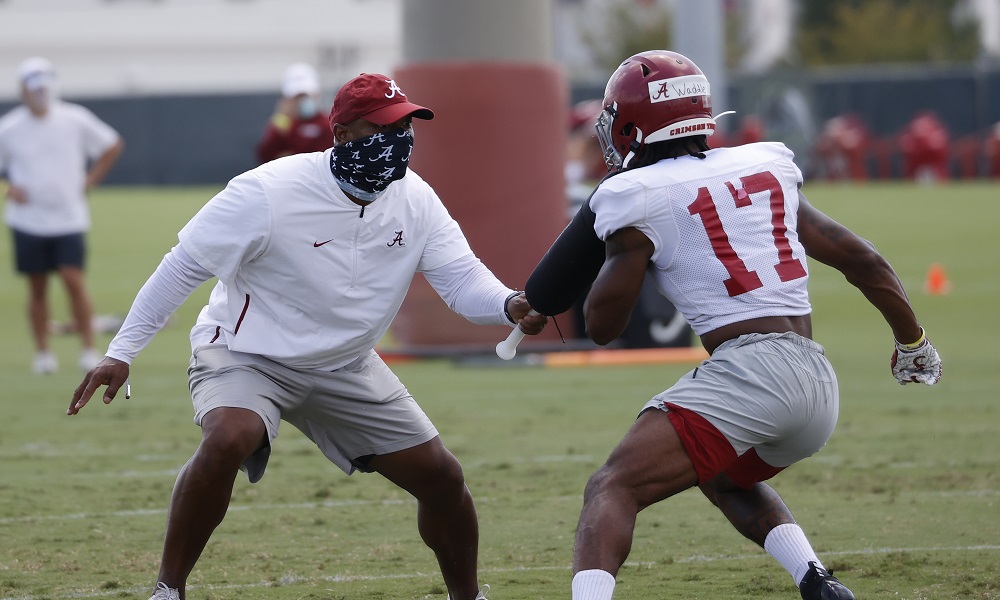 Nick Saban retooled his staff, but he also retained one holdover from the last two years.

Holmon Wiggins, an alumnus of the University of New Mexico, is in his third season with the Crimson Tide. He came to Alabama as a wide receivers coach in 2019 after four years (2015-18) coaching the position at Virginia Tech.

During his first season, Wiggins got Jerry Jeudy and Henry Ruggs III prepared to be first-round picks. He also coached two 1,000-yard receivers in Jeudy (1,163) and DeVonta Smith (1,256).

Last year, he propelled Smith to winning the Fred Biletnikoff Award, Heisman Trophy, and Associated Press Player of the Year.

He would win a host of individual awards while finishing his career as the Crimson Tide’s all-time leading receiver. Wiggins placed Smith and Jaylen Waddle in the top-10 of the NFL Draft.

He has been an excellent teacher for the receiver room. According to rolltide.com, Wiggins has accrued a promotion.

He is now the assistant head coach of offense for the Tide.

Wiggins is keeping the continuity together for the program, and he’s been huge on the recruiting trail. Wiggins has had a hand in Alabama securing Javon Baker, Traeshon Holden, Thaiu Jones-Bell, Christian Leary, Agiye Hall, Ja’Corey Brooks, and JoJo Earle during the last two recruiting cycles. Coach Saban definitely wants to keep Wiggins in Tuscaloosa.