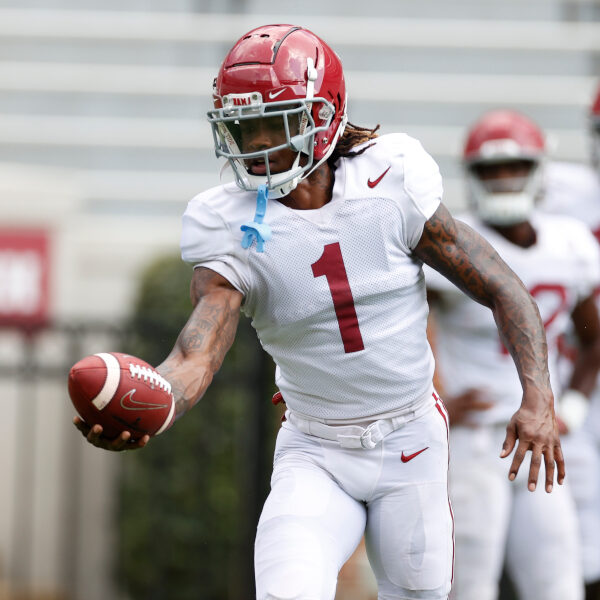 We are 20 days from Alabama’s season opener against Miami at Mercedes-Benz Stadium.

Last week, the Crimson Tide competed in its first scrimmage of preseason camp. Nick Saban updated reporters on the performances from Bryce Young, the offensive/defensive line, and the young talent at wide receiver and defensive back.

He was pleased with the intensity at Bryant-Denny Stadium but knows there is room for improvement. This year’s team could be Saban’s most balanced group since 2012. Before its next scrimmage, yours truly of Touchdown Alabama Magazine highlights the five biggest takeaways from the weekend.

Bryce Young carries the attention as the projected starter, but Bill O’Brien has a quarterback room that can help him win a national championship at Alabama.

Coach Saban said Young did a good job in the scrimmage; however, he wants to see the players around the sophomore play better.

When he had opportunities to make plays, Saban said Young excelled on the field. Per sources, Young had three touchdown passes — including two in the scrimmage. His third score went to Trey Sanders during a two-minute drill situation.

Paul Tyson, a redshirt sophomore, threw a 66-yard strike to Thaiu Jones-Bell for a touchdown.

He converted some third downs and looked in control on the field.

RELATED: Kendall Randolph is ‘key’ to the development of Alabama’s offensive line, per Nick Saban

Jalen Milroe is improving with each rep. The true freshman is a fantastic athlete, but the Tide is continuing to develop him as a quarterback.

If he can get the game to slow down, Milroe will be deadly in working through progressions.

He has the capability to become an elite passer, and the native Texan is working on it.

Kendall Randolph did not finish Saturday’s scrimmage because of a sprained ankle.

According to sources, the injury was not significant as he walked off under his own power. Randolph may have a minor to moderate sprain, but he should be able to play versus Miami. Saban told reporters that the redshirt senior is ‘key’ to the development of Alabama’s offensive line. The 6-foot-4, 298-pounder has played in 26 career games, including six starts.

RELATED: Nick Saban pleased with Bryce Young’s performance in scrimmage, looks for the rest of the offense to catch up

Randolph has experience at tackle, guard, and tight end. He has worked at right tackle and left tackle in fall camp.

JC Latham (freshman) and Pierce Quick can play right tackle, but the Tide should have Randolph in three weeks.

Trey Sanders is a warrior.

Despite the injuries, the sophomore is going after football. His teammates have been encouraged by his rehab, and Sanders looked dominant in the scrimmage. According to sources, the product of IMG Academy is ‘balling.’ One source stated how Sanders is providing shades of Najee Harris in the passing game. The 6-foot, 214-pounder gives Bill O’Brien another option to enhance Young at quarterback. He should be at full health come week one of the season. Sanders is back in action for the Tide.

Who are the playmakers behind John Metchie?

Alabama has too many to choose from.

Jameson Williams and Javon Baker are pushing for a starting role. Both looked impressive over the weekend. Traeshon Holden made plays in the scrimmage, and the sophomore continues his case.

JoJo Earle, a freshman, caught a 10-yard touchdown pass from Bryce Young. Saban mentioned him in the competition for a starting role as a kickoff returner, but Earle may crack the receiver rotation. Ja’Corey Brooks, a freshman, had a couple of receptions and has a body structure similar to Amari Cooper. Thaiu Jones-Bell grabbed a touchdown pass from Paul Tyson.

Slade Bolden is trying to hold his own, but he’s dealing with Christian Leary and Earle in the slot. Not to mention, Alabama has two big tight ends with Jahleel Billingsley and Cameron Latu.

Billingsley can be a first-round draft pick if things fall in order. Latu has been on fire since spring practice. O’Brien will have multiple looks on offense with the talent Alabama has.

5. Alabama’s defense should be a top-5 group in college football

Alabama will return to having a top-5 defense in college football.

Coach Saban said the defensive line is rotating nine players, which means the Tide is three-deep at each position.

Christian Harris, Henry To’oto’o, Christopher Allen, and Will Anderson ran over the first-team offense. Alabama has depth at inside and outside linebacker. The defensive secondary is going to be interesting as Ga’Quincy “Kool-Aid” McKinstry and Terrion Arnold will contribute as freshmen. Saban has spoken highly of McKinstry since the spring, and he likes Arnold’s athleticism, speed, work ethic, and ball skills. During its nickel and dime sub-packages, Alabama wants to work both guys on the field.

Brian Branch will have a role on this team.

He is getting reps at cornerback. We could see situations where the Tide kicks Branch outside in nickel and slide Josh Jobe in the box. This opens the Saban cornerback blitz look from 2009 with Javier Arenas. Jobe is a physical defender, and his speed will allow him to get home in sacking quarterbacks.

Pete Golding said at Alabama Football Media Day that the goal is to allow 13 points per game or less.

The Tide wants to have all its best defensive players on the field. This unit will be scary entering the season.