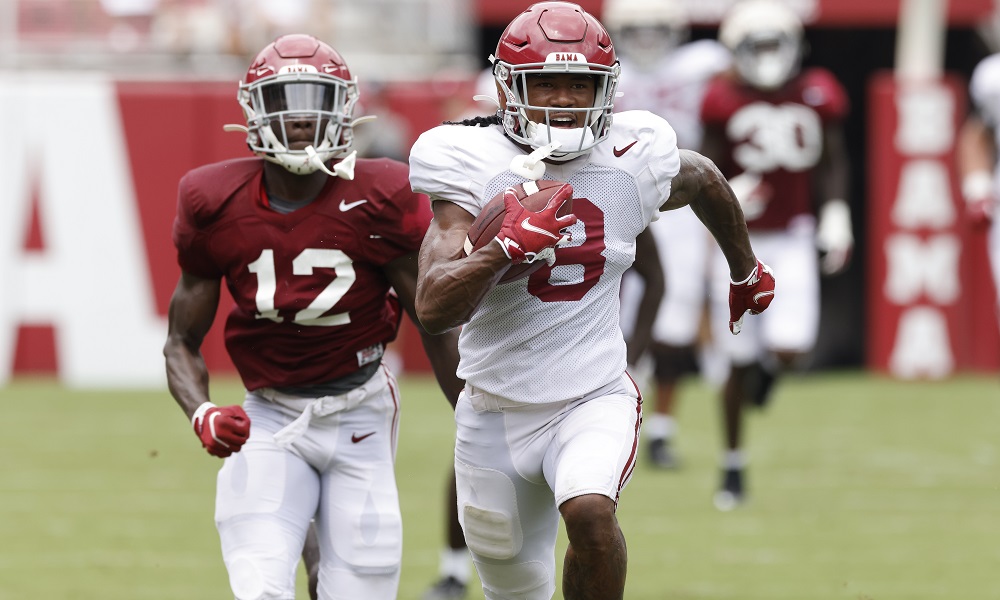 Nick Saban and the Crimson Tide’s coaching staff saw improvement. Alabama’s offense had some explosive plays; however, its defense has looked unbelievable. We are 13 days from a season opener between the Tide and the Miami Hurricanes.

RELATED: Will Anderson is ‘a complete player’ for Alabama according to Nick Saban

Yours truly of Touchdown Alabama Magazine has five major takeaways from the team’s scrimmage.

Nothing is set in stone on Alabama’s offensive line.

Chris Owens was considered a lock to be the starting center. He filled in admirably for Landon Dickerson in the SEC Championship Game versus Florida and started both College Football Playoff games in 2020. Owens started at center in Alabama’s spring game and held the role until the second scrimmage. Coach Saban went with Darrian Dalcourt as the first-team center.

The junior from Maryland had a solid outing, and the coaching staff likes the versatility he brings to the front line. As a member of the 2019 signing class, Dalcourt has played in 14 games during two years.

The other competition is at right tackle. Kendall Randolph has been bothered by a sprained ankle, so freshman JC Latham has gotten first-team reps. He arrived in this year’s class as a five-star via IMG Academy. Evan Neal, a fellow alumnus of IMG, has been assisting with Latham’s transition to the college game. The 6-foot-6, 325-pounder has a high ceiling and much potential.

It will be interesting to see which players will make up the starting five.

2. Trey Sanders continues to rise at running back

Trey Sanders has been incredible with each rep.

Alabama will feature its running backs in the passing game, and it fits Sanders’ skill set. He’s catching passes from Bryce Young and shows the burst to make moves in space. All of the aspects that make a five-star running back have returned to him.

The Tide has a strong rotation, but Sanders is second behind Brian Robinson Jr. Coach Saban is excited about the backs; however, he is pleased to see the fight from Sanders. After facing many setbacks, the sophomore is determined to stay healthy.

Crimson Tide fans are about to see the five-star back they always wanted.

3. Drew Sanders is emerging at outside linebacker

Drew Sanders has taken the next step and is set for playing time.

As a former 5-star from Texas, Sanders gained 14 pounds this summer. The 6-foot-5, 244-pounder created havoc in the scrimmage, and sources said he is starting to emerge at outside linebacker.

During a 7-on-7 situation, he made an athletic interception off Bryce Young. Sanders worked his butt off all offseason for this moment. He filled in for Christopher Allen in Saturday’s practice and will be first off the bench this season. King Mwikuta and Chris Braswell both played well, but Sanders showed the coaching staff he is ready now. He got a lot of conversation in the 2020 class, and he is prepared to cash in.

Alabama has a few young receivers that are gunning for an opportunity.

Ja’Corey Brooks was the least discussed true freshman, but he’s come on strong. He was on the receiving end of multiple passes for a second straight scrimmage. JoJo Earle is pushing Slade Bolden for the starting job in the slot. Christian Leary has been holding his own while sources look at Traeshon Holden as the ‘sleeper.’

One source said Holden has the speed, hands, routes, and athletic (leaping) abilities to be a ‘serious playmaker.’ Thaiu Jones-Bell had a good scrimmage, but the names listed above him bring more to the table. John Metchie, Jameson Williams, and Bolden are the main three, but the young guys are coming fast.

Per sources, DeMarcco Hellams had the tightrope procedure done on his ankle.

He may go against Miami, but Brian Branch or Daniel Wright will start at free safety if he does not play. Branch has had a great camp, and Saban said he’s played all positions in the secondary.

The sophomore defended nine passes (seven breakups, two interceptions) in 2020, which tied for third in the SEC for freshman defenders.

He has tremendous range and ball skills. Branch has a high ceiling and All-American potential.

One source told yours truly that the native Georgian had ‘the hit of the year’ in the second scrimmage. Saban loves his players with experience, but Branch is a talent one cannot deny.

RELATED: Relax Alabama fans, Jahleel Billingsley will figure it out with Nick Saban

Wright, a redshirt senior, has been in the program since 2017.

He is a good player that had a productive year in 2020. Wright finished with 60 tackles, one tackle for loss, three breakups, a quarterback hurry, and two interceptions. He returned a pick for a touchdown in Alabama’s game versus Texas A&M.

The 6-foot-1, 195-pounder can make plays, but he also takes a lot of gambles. Wright has played in 44 career games, so his experience means something. We will see how Saban plays it out, especially if Hellams does not go versus the Hurricanes.

-Will Reichard made every field goal with Paul Tyson as the holder.

-Williams will be Alabama’s deep threat’ on offense, per sources.

-Will Anderson could not be blocked. Beat Evan Neal a few times.

-LaBryan Ray (groin) was at the scrimmage but watched from the sideline.