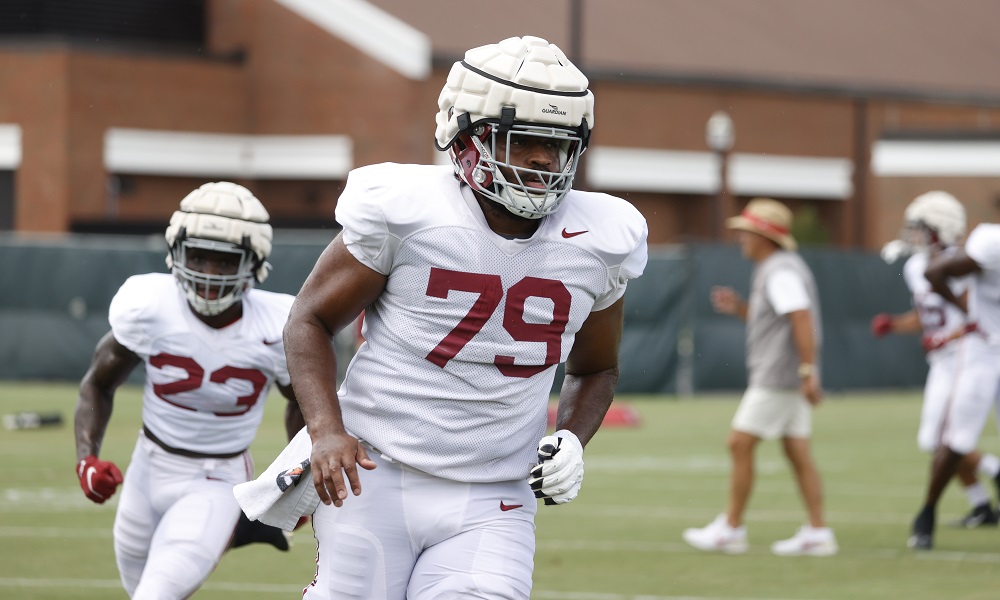 The University of Alabama had the best offensive line in college football last year.

Since it originated in 2015, Nick Saban has witnessed the Crimson Tide win two Joe Moore Awards.

The most recent one came in 2020 as the group of Alex Leatherwood, Deonte Brown, Landon Dickerson, Emil Ekiyor Jr., and Evan Neal guided Alabama to a national championship. This unit allowed Mac Jones, Najee Harris, and DeVonta Smith to each have a special season. Dickerson and Leatherwood were Unanimous First-Team All-Americans, and both helped Jones, Harris, and Smith become first-round picks in the NFL Draft. Neal and Ekiyor returned for this year’s unit, but Dickerson and Leatherwood are in the National Football League. Chris Owens, a senior, filled in admirably for Dickerson during the Southeastern Conference Championship Game versus Florida. He started both matchups in the College Football Playoff, performing well against Notre Dame and Ohio State. The native Texan entered the offseason as a lock to start at center.

After redshirting his freshman season in 2016, Owens has played in 38 games — including seven starts. He has at every position on the offensive line, seeing time at center, guard, tackle, and tight end. The 6-foot-3, 305-pounder has embraced the role of ‘old man’ on the team. Despite entering his sixth year, the former four-star is an important piece to a reloaded offensive front.

Owens is competing with Darrian Dalcourt to remain the starting center. Alabama had the junior running first-team during last week’s scrimmage, and Coach Saban liked what he saw in Dalcourt. As a Maryland native, the alumnus of St. Frances Academy has logged action in 14 games as a backup center. He played against Texas A&M, Tennessee, Georgia, Florida, Arkansas, and Notre Dame in 2020. Dalcourt was regarded as one of the top center/guard prospects out of high school in the 2019 class.

RELATED: Will Anderson is ‘a complete player’ for Alabama according to Nick Saban

Regardless of his talents, DJ Dale sees Owens as the best option at center.

“Chris Owens is probably one of the smartest guys I’ve ever played against,” Dale said last week. “He knows what every person on the offensive line has to do, and he knows what we are doing when we line up on defense. He calls out what we are running sometimes, so it’s very challenging to go against him. He’s athletic, he can move, he’s quick, and he’s strong.”

Brian Robinson is in his redshirt senior year at running back. During his presser on Monday, he said all the younger players depend on Owens for leadership. The Tuscaloosa native said Owens is a ‘positive role model’ who has had a lot of success with Alabama. He has been on two national championship teams and three SEC Championship teams in his tenure.

Dickerson brought a different personality to the center position. He was physical in the run game, an elite pass blocker, and his antics made him a favorite among Tide fans. He was beloved by his teammates and coaches and was voted a permanent team captain by his peers. Owens has big shoes to fill, but he is capable of doing it.

He started 2019 as Alabama’s center; however, Dickerson ended up replacing him.

Owens now has to fend off a surging Dalcourt to remain the guy to head the offense.

The Tide is now in its final week of fall camp.

It opens the regular season versus Miami on Saturday, Sept. 4 at 2:30 p.m.