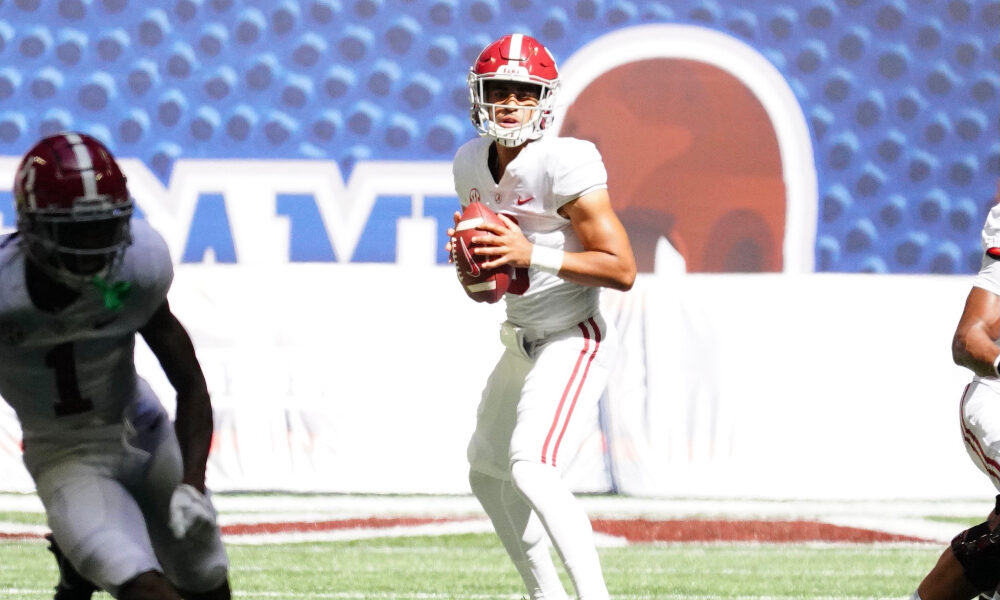 All eyes were on Alabama’s sophomore quarterback Bryce Young on Saturday as the Crimson Tide kicked off its season against Miami. Led by Young, the first half was a one sided affair with the Crimson Tide appearing to not be taking a huge step back from last years historic offense.

On the Crimson Tide’s first drive of the season Young connected with wide receiver John Metchie for a 37 yard touchdown, setting the tone for the next 30 minutes.

Running back Brian Robinson also appeared to be taking advantage of his extended opportunity as he ripped off multiple physical runs picking up first downs for Alabama.

Freshman wide receiver JoJo Earle got his name on the stat sheet as he made his first career reception in the second quarter of action.

Another player who made a big impression with his first reception was tight end Cameron Latu who took his first catch 9 yards for a touchdown and followed it up with another impressive catch and run resulting in a score.

Miami’s first half troubles worsened when star safety Bubba Bolden was ejected for targeting at the end of the first quarter.

Hurricanes quarterback D’Eriq King has gotten off to a rough start despite a solid completion percentage at the half. King has been under constant duress from Alabama’s front seven with outside linebacker Will Anderson turning in an impressive opening two quarters.

It wasn’t all positive for Alabama’s defense as it lost fellow linebacker Chris Allen with a lower leg injury. Allen was seen being carted to the locker room while wearing a boot on his right foot.

Miami will receive the ball in the second half to try and turn things around.