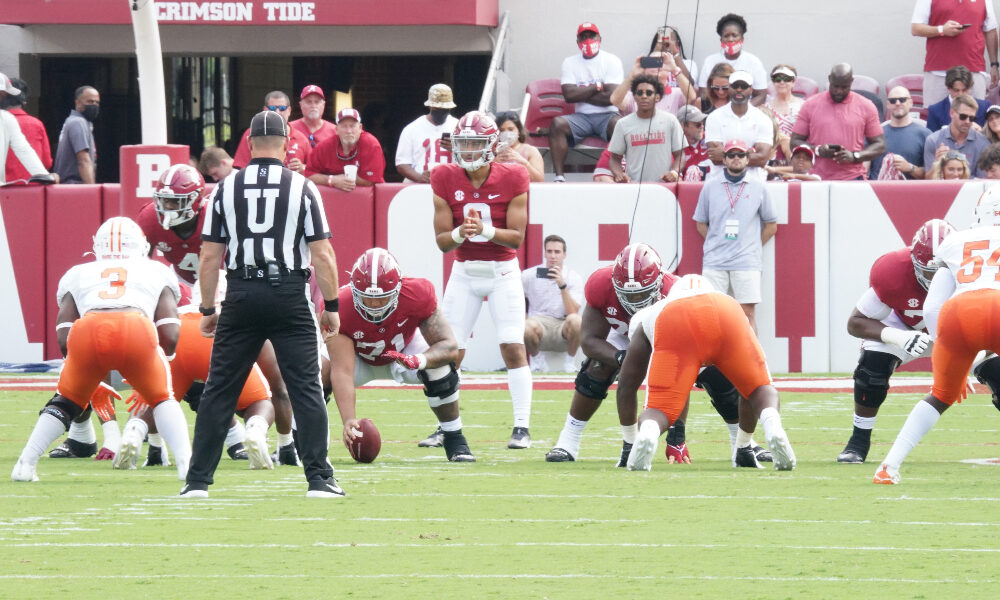 It wasn’t a great week of practice for Alabama, and the opening plays of the game warranted the frustration displayed by Nick Saban in his press conferences.

The Crimson Tide’s offense looked night and day from a week ago and not in the good way. It began the game with a whimper with a quick three-and-out which included a sack on third down.

It’s second time around wasn’t much better as it included a few tough penalties setting itself up for long third down conversions which didn’t come. Wide receiver Jameson Williams also had a big drop early on which could have resulted for a touchdown.

Miscommunication, missed blocks and missed opportunities were looking like the story of the game, but luckily for the Crimson Tide it’s defense and special teams showed up.

The run Mercer wasn’t getting much on the ground as Alabama’s front once again over powered the opposition in the opening parts of the game.

Linebacker Herny To’oto’o was making plays all over the field as he carried over his performance from a week ago for the Crimson Tide.

Making their first career starts were freshman defensive back Kool-Aid McKinstry and sophomore linebacker Drew Sanders who both shined in the first half.

Sanders provided solid pressure off the edge on multiple plays, and added two pass breakups with one leading to an interception by McKinstry. Linebacker Chris Braswell was able to make an impact on special teams with a blocked punt which was recovered by running back Jase McClellan for a touchdown.

The offense eventually picked things back up as running back Brian Robinson rushed for his first touchdown of the season on a four yard carry. In the second quarterback, Young would connect with wide receiver Slade Bolden for his first score of the year to get things going.

McClellan would make another mark on the stat sheet with a five yard touchdown run as well.

Alabama goes to half leading Mercer 31-0.