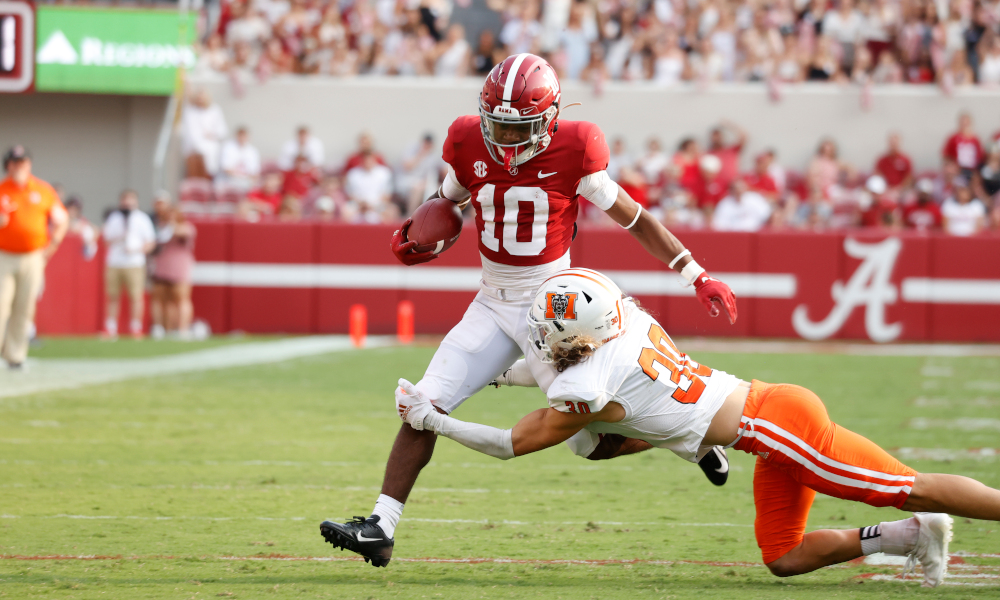 Drew Sanders has taken advantage of an opportunity at outside linebacker with Christopher Allen out.

Alabama fans are pleased with Sanders’ growth and want the success to continue. On Monday, head coach Nick Saban shared difficult news on sophomore running back Jase McClellan. He sustained a knee injury versus Ole Miss and will miss the rest of the season. Before the mishap, McClellan had 191 yards rushing, 97 yards receiving, and four touchdowns.

RELATED: Alabama football to create depth at running back with Jase McClellan out

Saban mentioned the idea of the Crimson Tide having an “emergency” running back. He said the team had a few players that could take on the role. After losing a native Texan to injury, Alabama has another Texan from the same high school as McClellan that would fit the job. JoJo Earle, an alumnus of Aledo High School, was a special athlete during the 2021 recruiting cycle.

He was committed to Louisiana State University, but he flipped to the Tide.

Earle was a dynamic wide receiver and return specialist; however, he operated out the backfield too. As a four-star recruit, he recorded 45 total touchdowns — including 14 rushing scores. Earle tallied 675 rushing yards in two seasons at Aledo while juggling track as his second sport. In watching tape on him, the coaches would put him in motion to flanker the quarterback.

Earle would take hand-offs and display speed between the tackles. The 5-foot-10, 170-pounder had the wiggle to bounce runs outside and acceleration to negate angles from defenders. He has a skill set that resembles great college players such as Percy Harvin (Florida) and Tavon Austin (West Virginia).

Both individuals were all-purpose athletes on offense. They made plays at wide receiver, in the return game, and out the backfield.

Now is the time for Bill O’Brien to be creative with Earle at the position.

Alabama will get production from Trey Sanders and Roydell Williams, but Earle can offer a change of pace. McClellan enhanced the offense with his versatility at receiver.

Earle can be a reliable target for Bryce Young, and Young told reporters about the freshman’s ‘professional mindset.’

College football is about creating matchups.

The best offensive minds isolate the most explosive player to take advantage of their skills. If O’Brien uses Earle’s footwork, quickness, speed, vision, playmaking abilities, and explosiveness in space, he could generate opportunities for points with him at running back. An injury has helped the growth of Drew Sanders. It is time for the Tide to be innovative with Earle.