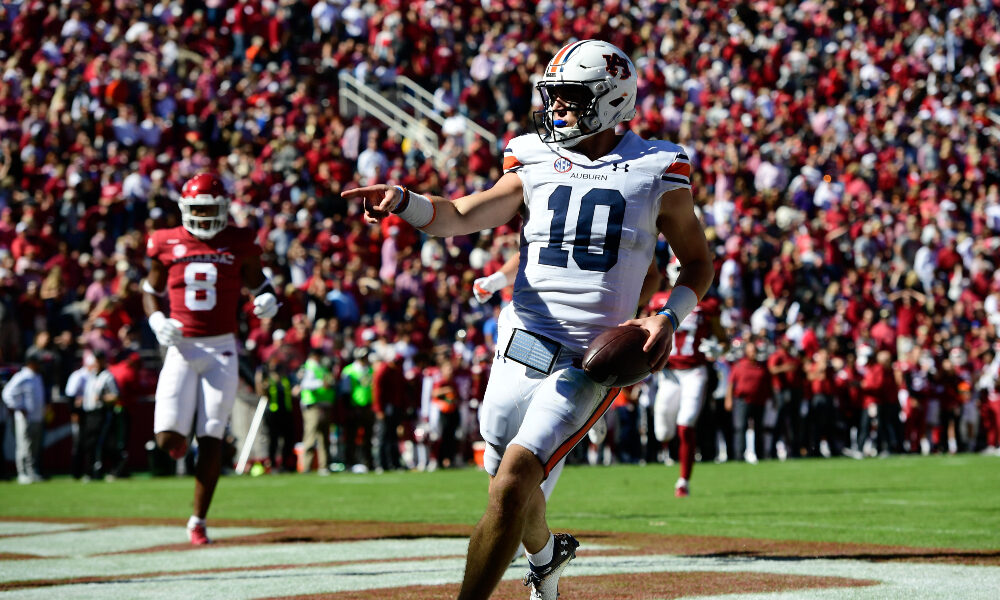 Iron Bowl is already off and running with Auburn quarterback Bo Nix and his comments that will be making many headlines at the top of the week.

Nix made an appearance on The Next Round Monday afternoon and was asked about whether he watched the Alabama and Arkansas game from Saturday. While answering the Tigers quarterback threw some shade at the SEC officiating saying there were some “controversial calls” favoring the Crimson Tide.

“Just a few of those controversial calls that were in that game raises some questions for sure I guess unless you’re an Alabama fan,” Nix said. “But that’s just part of the game. We’ve discussed it over and over and over. That’s not gonna change no matter what happens but it was a good game for sure.”

Nix was later asked a follow-up if he was insinuating that Alabama gets officiated differently and he decided to double down on his previous statement.

“I mean legitimately I think you can watch the game and anybody unbiased will think that something is different,” Nix said. “But it is what it is. It’s kinda how it’s always been. But that’s part of the game and they have good players. Can’t take that away from them.”

Nix will not be playing in Saturday’s game due to a foot injury suffered against Mississippi State.

Alabama quarterback Bryce Young was asked about the comments made by Nix during the player’s media availability on Monday. Young didn’t have any wood to throw on the fire saying it’s something the Crimson Tide can’t control and isn’t concerned about.

“That’s an external factor,” Young said. “That’s something as a team we don’t look at, we don’t control. Whatever happens, that’s out of our control — coach Saban’s always talked to us about making sure that we control what we can control and focus on what we can do. Any external factor, that’s not really something that we’re concerned about.”

Alabama will kickoff against Auburn this Saturday, Nov. 27 at 2:30 p.m. CT inside Jordan-Hare Stadium with CBS on the call.