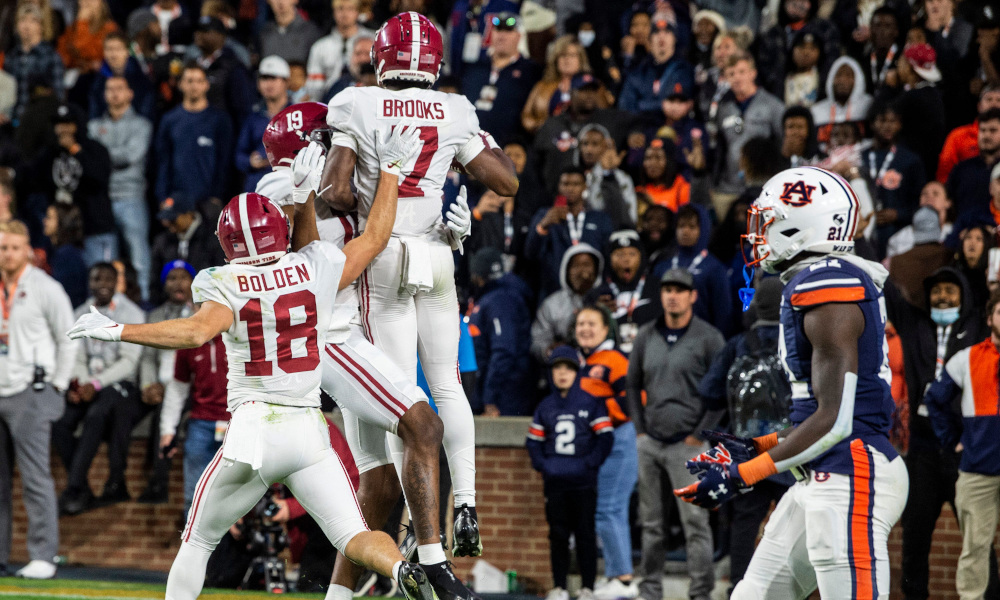 Two of them got early attention, but the final one emerged in big moments.

Smith was precise in his routes, but he also seemed to make the critical plays in matchups.

He totaled one reception versus Mississippi State in 2017, but it was a 26-yard, game-winning score. Smith lifted the Crimson Tide to a 31-24 win at Davis Wade Stadium in Starkville, Miss. Smith would return in the 2018 College Football Playoff National Championship Game with the best catch of his career.

He broke Georgia’s heart with a clutch, 41-yard touchdown grab in overtime to win the matchup.

Smith silenced the crowd in Starkville, and he silenced Bulldog fans in Atlanta that thought Georgia was getting its first national championship. Could we see another Crimson Tide receiving option write a similar story?

Saturday’s meeting in Iron Bowl No. 86 might have provided us with one. In the 2021 signing class, Nick Saban brought in four talented receivers.

Hall’s physicality and the speed of Leary and Earle snatched eyeballs. Ja’Corey Brooks, a native of Miami, Fla., was also recruited in the class. An alumnus of IMG Academy, the former four-star created a memory at Jordan-Hare Stadium that will last forever. Alabama lost Jameson Williams in the first half because of a targeting call. Williams, a transfer from Ohio State, had been the Crimson Tide’s big-play receiver all season. He leads the team for receiving yards (1,261), touchdowns (13), yards per catch (20.6), and yards per game (105.1).

After Williams got ejected, Tide fans wondered where its big plays would come? John Metchie stepped up with 13 catches for 150 yards (24 targets), but the game’s brightest moment went to a true freshman in regulation.

Legends get made, and stories form in the Iron Bowl.

Alabama trailed by seven points (3-10) with 1:27 left in the game. The Crimson Tide started its possession on its 3-yard line and needed 97 yards to force overtime. Bryce Young made clutch passes, and like Tua Tagovailoa, his biggest play was to a freshman.

RELATED: Alabama drops to No. 4 in the AP Top 25 following Iron Bowl

Brooks recorded a 21-yard catch from Young to put the Tide on Auburn’s 45-yard line. His second catch silenced a boisterous crowd for the Tigers. He came down with a 28-yard touchdown grab, tying the score at 10 with 24 seconds left.

Brooks created separation, executed a perfect route, and made a play.

Jacorey Brooks made the SAME catch in high school he made against Auburn 🤯 @c7_brooks pic.twitter.com/JtlgHiQ1DO

It felt like DeVonta Smith from a few years ago, but Brooks when the Tide needed it.

Alabama earned a 24-22 victory over Auburn, and Brooks’ teammates spoke about him.

“We preach about being ready when your number is called,” Bryce Young said of Brooks after the game. “He is someone who prepares and works hard. Tonight was a big night for him, and he made plays. We had a one-on-one matchup, and I had faith in Ja’Corey to win the matchup, and for someone that young like him in a moment that big to win the route and make the catch, it says how great of a player he is.”

Metchie told reporters it was Brooks’ preparation that made him ready for the moment.

RELATED: Fans vote on whether 2021 Iron Bowl is greatest Iron Bowl of all time

“He is always trying to learn from the older guys and is a sponge at practice,” Metchie said. “He goes hard. He has great attention to detail.”

Brooks’ first marquee play at Alabama was blocking a punt for a score versus Texas A&M. After earning Saban’s trust on special teams, Brooks received a chance to emerge with Jameson Williams out and took advantage of it.

Williams was so proud of Brooks that he highlighted the freshman on his Instagram.

The 6-foot-2, 190-pounder becomes another player to watch as Alabama enters the postseason.