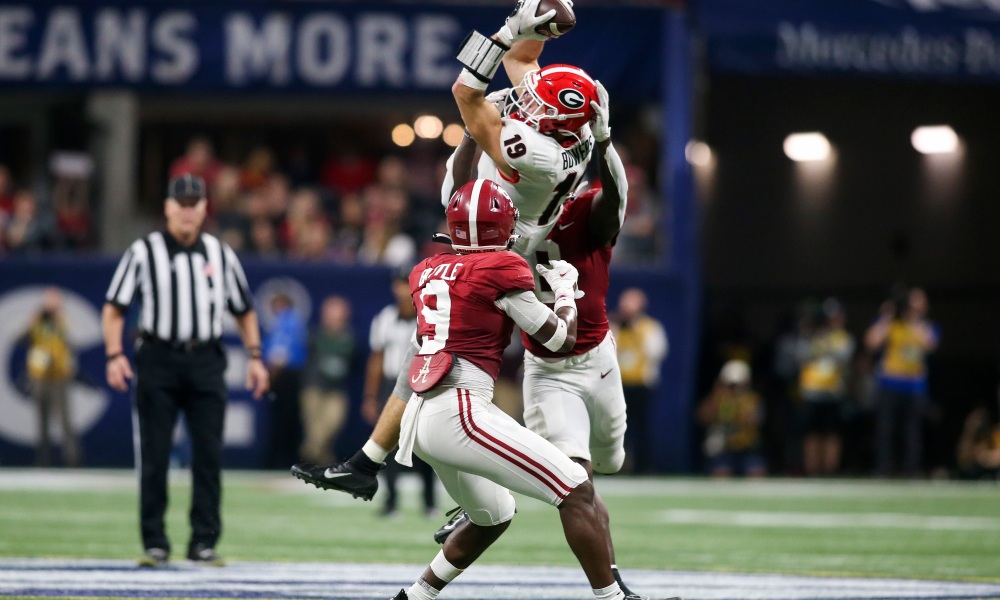 We have the two best teams playing for the College Football Playoff National Championship, and it’s a rematch of the Southeastern Conference Championship Game.

All bettings sites have Georgia favored by three points over Alabama. The Crimson Tide earned a 41-24 victory on Dec. 4, 2020, at Mercedes-Benz Stadium in Atlanta, Ga. National media has given Kirby Smart the edge, but he has not beaten Nick Saban.

RELATED: It’s time to put some respect on Pete Golding’s name after shaky start to 2021 season

Brock Bowers, a freshman, was the lone Bulldog offensive player to have success against Alabama’s defense last month.

As a California native, Bowers totaled a game-high ten receptions for 139 yards and one touchdown.

The 6-foot-4, 230-pounder frustrated Alabama’s secondary as a tight end. He made contested catches, executed perfect routes, and provided Stetson Bennett with an imposing target on the field. Bowers has four 100-yard receiving performances and is looking for a fifth against the Crimson Tide. He leads the Bulldogs in receptions (52), yards (846), and touchdowns (12).

If Georgia is to defeat Alabama, Bowers must be a heavy factor.

According to Nick Saban, Bowers is one of college football’s ‘premier players.’

“I know he’s just a freshman, but this guy’s got great size,” Saban said Monday. “He’s a good blocker. He’s physical. He’s tough. And he has wide receiver skills in every way, shape, or form, which makes it difficult being a bigger guy for bigger guys to cover him. It makes it also difficult for smaller guys to cover him. So, this guy is just a phenomenal football player all the way around. They do a good job of featuring his talents as well. And he’s been extremely productive in a lot of ways.”

After hearing that from Saban, how does the Tide contain Bowers?

Alabama might have to try a few different matchups.

It could have a combination of Brian Branch and DeMarcco Hellams/Daniel Wright over the top. The Tide could look at Christian Harris (defensive back skills) with Hellams over the top. Alabama may also want to consider Khyree Jackson on Bowers. Jackson, a junior college transfer, is 6-foot-3 and 197 pounds. Jackson has a 6-foot-5 wingspan. He could disrupt Bowers more. The Crimson Tide cannot afford to have Bowers run wild. No matter what scheme it uses, Alabama must limit Bowers’ production.

Pete Golding has a big task for next Monday night.