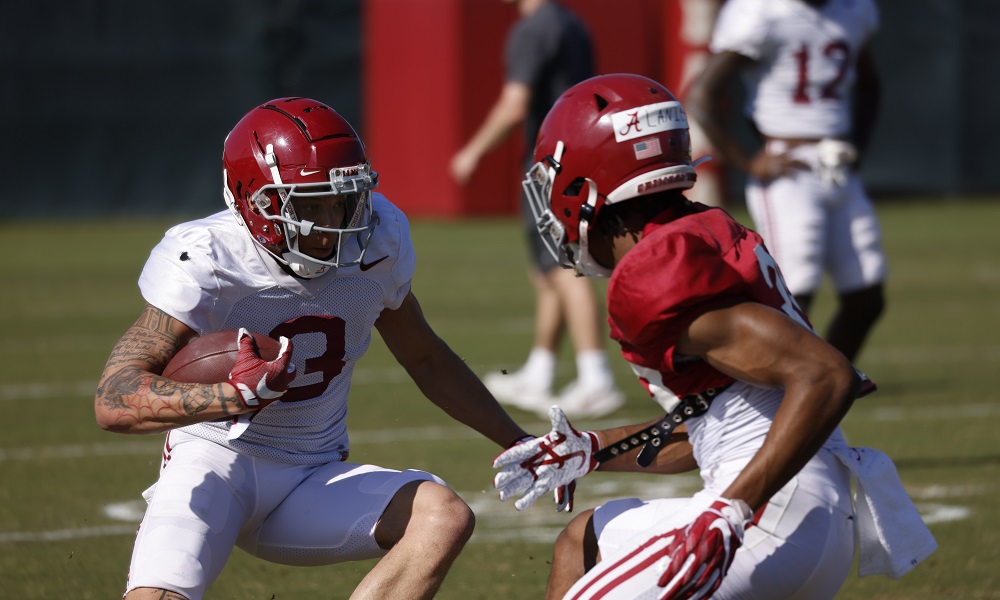 Bringing back a player of the caliber of Bryce Young is enough for any team to cause a sigh of relief, but if Alabama wishes to achieve its championship aspirations, the offense is going to need to find some new stars around the reigning Heisman Trophy winner.

The Crimson Tide has seen its top three receivers from 2021 Jameson Williams, John Metchie and Slade Bolden all depart for the NFL leaving sizeable gaps for the team to fill.

Offensive coordinator Bill O’Brien has a few young options to work with on the team but Nick Saban and the rest of the staff still went out and acquired two experienced receivers to add to the team.

Former Georgia and Louisville wide receivers Jermaine Burton and Tyler Harrell have both now joined the team. Burton was the first to arrive in Tuscaloosa and was able to go through spring football with the team.

This has helped Young get ahead of the curve and develop chemistry with the former Bulldog and it worked in his favor as Saban praised Burton as the most consistent receiver on the team. Even before he joined Alabama, Burton’s explosiveness caught Young’s eye and his willingness to adapt to any role on offense has impressed him.

“He’s someone who comes to work every day with a great attitude,” Young said to the media on Tuesday. “Before every walkthrough, he’s coming up to me like, ‘lets get it’ to have a great practice, lets get better. He wants to compete with the corners. He’s talking to them. And also he’s just he’s willing to work, whether it’s in a meeting room, just knowing how to run things, knowing what we’re expecting, know what I like, what he likes. And then on the field, he’s always giving everything –finishing routes, finishing plays.

“He’s super competitive. He’s willing to go run any route, play any role, not selfish at all. So that stuff definitely popped on film and now that you get to see him in practice, you get to be around him, it makes a lot of sense why he was able to have the success he has, and I’m super excited to keep watching him.”

Harrell arrived at Alabama at the beginning of fall camp and has begun working towards being fully integrated into the offensive system. During his time with the Cardinals, Harrell averaged 28 yards per reception which is something Young has been eager to add to the offense.

Harrell still needs to go through a bit of a learning curve, but Young reports that he is asking tons of questions to try and absorb everything he can.

“He’s been working really hard,” Young said. “He’s been asking a bunch of questions, soaking everything in. And then obviously throughout the offseason, we’ve seen a lot of speed. So down the field, he ran really well. He’s run a lot of stuff down the field, and being explosive is something that is definitely a premium for us.

“But really what sticks out is his willingness to learn. We’re right next to each other in the locker room. He’s been asking me questions, signals, things that I like, stuff that he likes, just bouncing stuff off. So his willingness to learn, how quickly he can pick up on things I think what he can do on the field is special on top of that.”