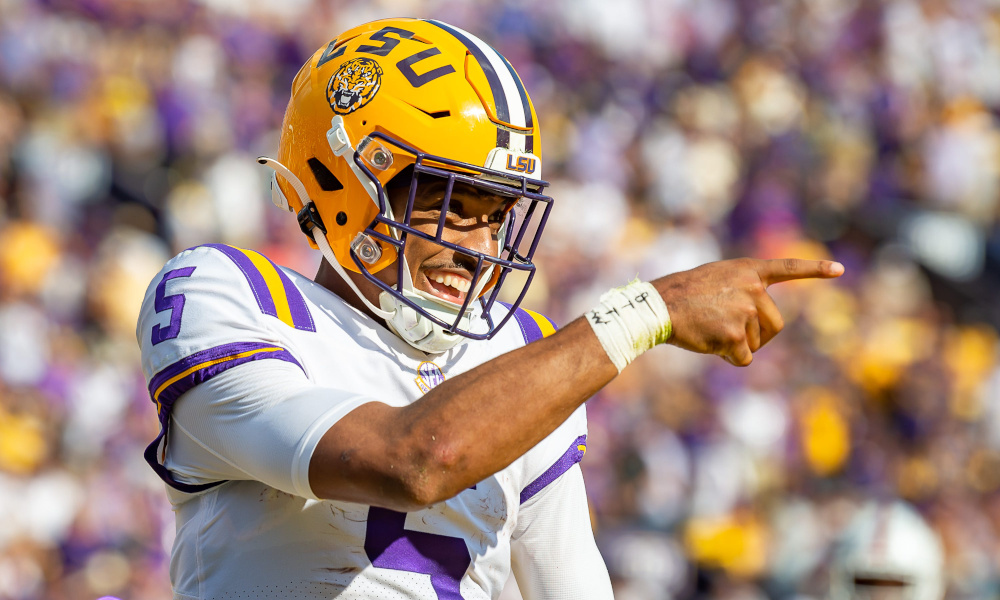 Alabama’s defense did a good job against KJ Jefferson (Arkansas) and Will Rogers (Mississippi State), but it struggled against Quinn Ewers (Texas) and Hendon Hooker (Tennessee).

Jayden Daniels, a transfer from Arizona State, brings the Crimson Tide a different challenge as LSU’s signal-caller. He has been playing his best football as of late, especially in the Tigers’ matchups against Tennessee, Florida, and Mississippi. Daniels, a California native, tossed six touchdowns to one interception combined in those games. He completed over 70 percent of his passes versus the Volunteers, Gators, and Rebels. Daniels had 248 passing yards, 121 rushing yards, and five total touchdowns during LSU’s 45-20 victory over Ole Miss. The 6-foot-3, 200-pounder has 21 total scores to one interception for the Tigers.

LSU has improved its rushing attack with Armoni Goodwin and Josh Williams since the Florida State game, but Daniels’ improvement in the passing game has Brian Kelly’s offense playing with swagger. The Tigers want to spoil Alabama’s opportunity of winning a Southeastern Conference Championship and making the College Football Playoff. Henry To’oto’o, a senior linebacker for Crimson Tide, told reporters on Monday about the challenge Alabama has in defending Daniels.

“Jayden is a very elusive guy, he is so fast,” To’oto’o said. “He is almost like a running back, so quick in and out of his cuts. He can throw the ball too, so I think Jayden is going to be a huge challenge for us this weekend. We have to scheme up for him and tackle well in space. I am super excited about this game because Jayden is one of those quarterbacks you have to prepare for. You have to tackle well and practice well in going against guys like him.”

To’oto’o said Alabama’s scout team offense is preparing the defense to face Daniels. Jalen Milroe (sophomore) and Ty Simpson (freshman) run the scout team. Milroe presents Daniels’ athletic side to break contain and make plays with his legs. Simpson brings the arm talent from accuracy, precision, and timing of passes. Hopefully, both will have the Crimson Tide’s first-team defense ready to neutralize LSU’s offense. The Tigers have been hot as of late, scoring 45 points against Florida and Ole Miss.