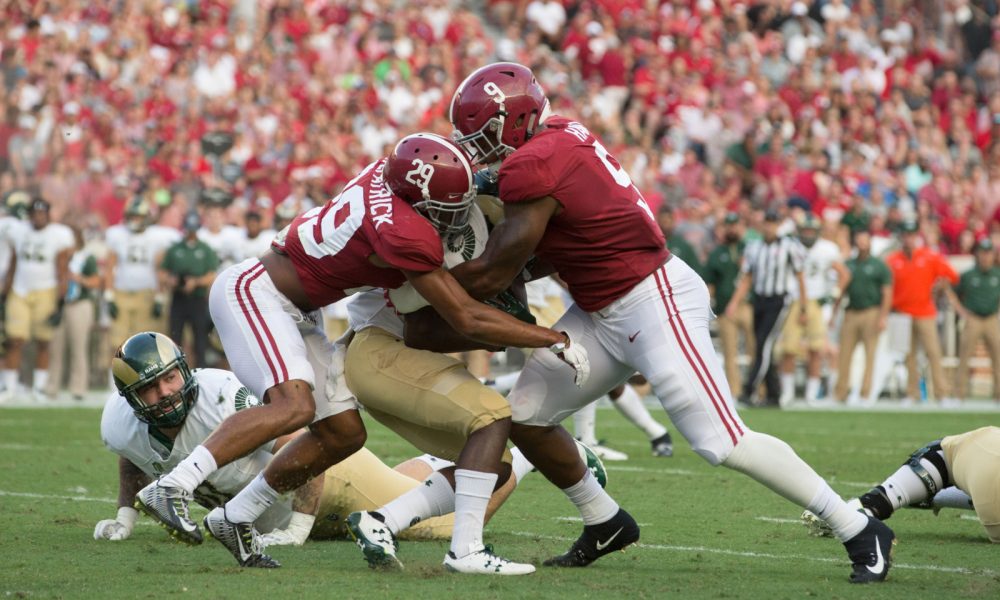 A sigh of relief was cast around Alabama’s fan base, especially after senior defensive end Da’Shawn Hand tweeted on Sunday that his left knee injury was not as serious as the initial thought.

The injury, which was an MCL strain, happened during the third quarter of the Crimson Tide’s matchup versus Mississippi over the weekend.

He was cut down on a play as the Ole Miss defender hit the inside of Hand’s left knee with his helmet. The former five-star and Virginia native was helped off the field and carted to the locker room after the incident occurred.

Alabama head coach Nick Saban spoke to the media following the game, and stated that Hand’s injury was only a strain. After all evaluation took place on Sunday, the diagnosis was the same.

“Da’Shawn Hand just has an MCL strain,” Saban said today. “He will be out and probably very doubtful for at least this game and maybe more.”

Before exiting the contest, Hand totaled three tackles – including one for loss and a sack.

Raekwon Davis, Isaiah Buggs, Joshua Frazier and Quinnen Williams will be called upon to step up, should Hand miss more than one game. Davis and Buggs combined for four tackles, 1.5 sacks and three quarterback hurries in the Tide’s win over Ole Miss.

Frazier and Williams, on the other hand, combined for four tackles, while Williams chimed in with two tackles for loss and a quarterback pressure. Alabama also has Jamar King, Johnny Dwight and LaBryan Ray in the mix as well – providing depth along the defensive front.

Saban and the Tide will face a Texas A&M team that has started to find itself on offense, after encountering a struggle in week two versus Nicholls.