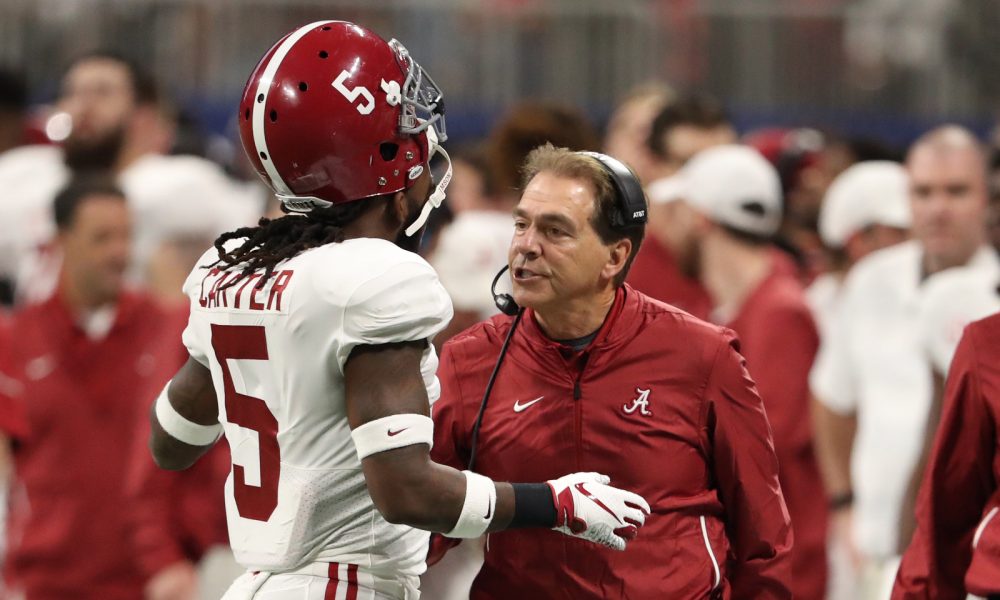 Georgia quarterback Jake Fromm totaled over 300 yards passing; however, the sophomore did not have much success against one Alabama defensive back in particular.

He was recruited in 2016 to be an cornerback, but much like former Crimson Tide star Minkah Fitzpatrick, Shyheim Carter has become a jack of all trades.

No one caught a pass on him and aside from running back D’Andre Swift taking a perfect angle on a swing pass for a touchdown, the junior from Louisiana locked everything down from his nickel position. While carrying a team-high three pass breakups in the Southeastern Conference Championship Game, Carter’s pressure off the edge resembled Fitzpatrick in the third quarter.

RELATED: Nick Saban has confidence with Keaton Anderson at safety versus Georgia

On a critical third down with two yards to go, the former four-star timed his jump on a blitz and forced Fromm to rush his throw. The incompletion was one of multiple defensive stops for the Crimson Tide that allowed its offense to steal the game, 35-28 at the end.

With the exception of Swift and Issac Nauta crossing up linebackers, the trio of Terry Godwin, Mecole Hardman and Jeremiah Holloman were held in check.

Riley Ridley had four receptions – including one for a score – however, Alabama’s secondary wasn’t completely embarrassed.

Carter finished the game with five tackles and one quarterback pressure to go with three breakups.

After 13 games, he stands eighth on the team in tackles (42), tallies a team-high 10 pass breakups and leads the defensive backfield in quarterback hurries with three. Georgia was a task, but handling Oklahoma entourage of Marquise “Hollywood” Brown and CeeDee Lamb is a completely different animal.

Alabama will have some time to rest before Carter and company get ready to battle the Sooners on Saturday, Dec. 29 at Hard Rock Stadium in Miami, Fla.