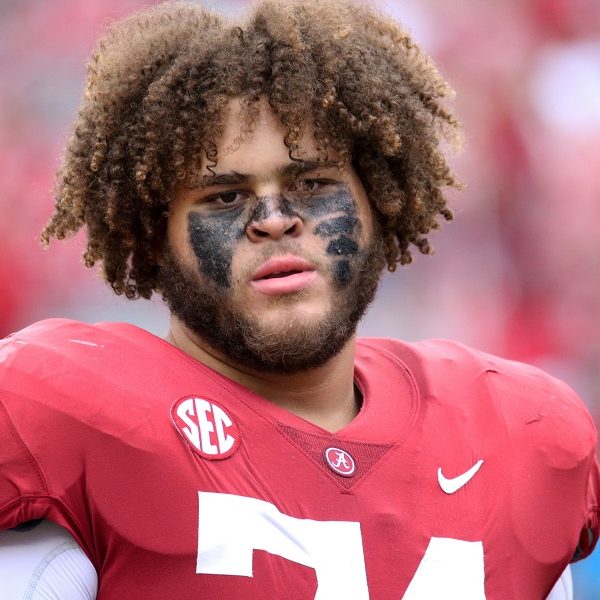 Summary: It’s not often for a school to sign one offensive lineman that was highly-ranked on the ESPN 300 recruiting site; however, the University of Alabama was fortunate enough to sign two in its 2017 class.

Jedrick Wills, a native of Lexington, Ky., twice led Lafayette High School to the Class 6A state championship game as a junior and senior. He anchored an offensive front in 2016 that averaged 41.8 points and 454.8 yards per matchup, which led to him earning a five-star rating from Rivals.com and a four-star from every other recruiting network.

Wills was No. 33 on the ESPN 300 and chose Alabama over SEC schools: Kentucky and Tennessee. While he played a role in the Crimson Tide’s run to a College Football Playoff National Championship in 2017, Wills’ sophomore year showed his ability as an elite pass protector.

He led the team in knockdown blocks (50) and allowed one sack and one quarterback hit – aiding Tua Tagovailoa to become the fourth 3,000-yard passer of the Nick Saban era.

Behind Wills, the native Hawaiian tossed for 3,966 yards and 43 touchdowns.

Tagovailoa would go onto set multiple single-season school records and earn recognition as an All-American and Heisman finalist. Wills secured the right side (right tackle) of a group that boasted college football’s No. 3 scoring offense (45.6 ppg), No. 6 total offense (522 ypg), No.1 pass efficiency offense (197.34 rating) and No. 6 passing offense (323.6 ypg).

He graded out lower than 87 percent on his assignments in only one game (Louisville); nevertheless, Wills’ was named Southeastern Conference Offensive Lineman of the Week for performances against Missouri and LSU.

He excelled on assignments versus the Tigers of the SEC East, grading out at 91% and helping Alabama rack up 564 total yards in a 39-10 win.

In the SEC Championship Game against Georgia, it was Wills that did not allow a sack and pushed the team to erase a 14-point deficit in the second half to obtain a 35-28 victory.

As for his footwork, the junior does a nice job of establishing a strong first step and brings his base with him in neutralizing pass rushers. His feet are on a string with his arms and this allows him to limit defensive ends and edge-bending outside linebackers from sacking the quarterback.

-Needs to be more physical in run blocking

Summary: Even with him making it possible for five receivers to tally 500+ yards, Wills and Alabama’s offensive line were not the best run blocking unit. Much of this is not on the players, due to Brent Key’s lack of being a strong technician coach. He was a great recruiter, but he could not get a bunch of 300-pound men to play up to their size.

The Crimson Tide were more finesse than physical under Key and it showed with the team not having a 1,000-yard running back.

This will all change with Kyle Flood taking over.

For someone who has coached offensive linemen for 25 years, Flood will get the maximum effort from Wills and company. Despite have three 500-yard rushers – including Josh Jacobs, who led the rotation with 11 touchdowns – Saban wants to have more sustained drives next season to wear opposing defenses down. Physicality in the run game is needed for Wills.

Much like Cam Robinson and Dominick Jackson before him, Wills does suffer from the occasional pre-snap penalty.

False starts do not get him everything; however, it seems to bite him in the most critical of moments.

Focusing on the ball more will be pivotal for Wills in the fall.

Along with no allowing a sack to Tagovailoa, Wills’ expectations will include setting the edge for a 1,000-yard back, winning the Outland Trophy or possibly winning the SEC’s Jacobs Blocking Trophy.

With him being eligible for the NFL Draft, the thought of being a first-round pick has surely crossed his mind. Wills is also looking at becoming an All-American or all-conference player with a strong outing for the Tide. Above all else, the main idea is to return to the national title stage and finish the job by hoisting the CFP Trophy come next January.

From Kentucky to the University of Alabama, Wills is in for a huge year.

He has the size and tools to be one of the college football’s best linemen and if he has the production needed, Wills can position himself as a top-20 pick for the draft.

He has to become a more physical run blocker, but Kyle Flood will work with him.