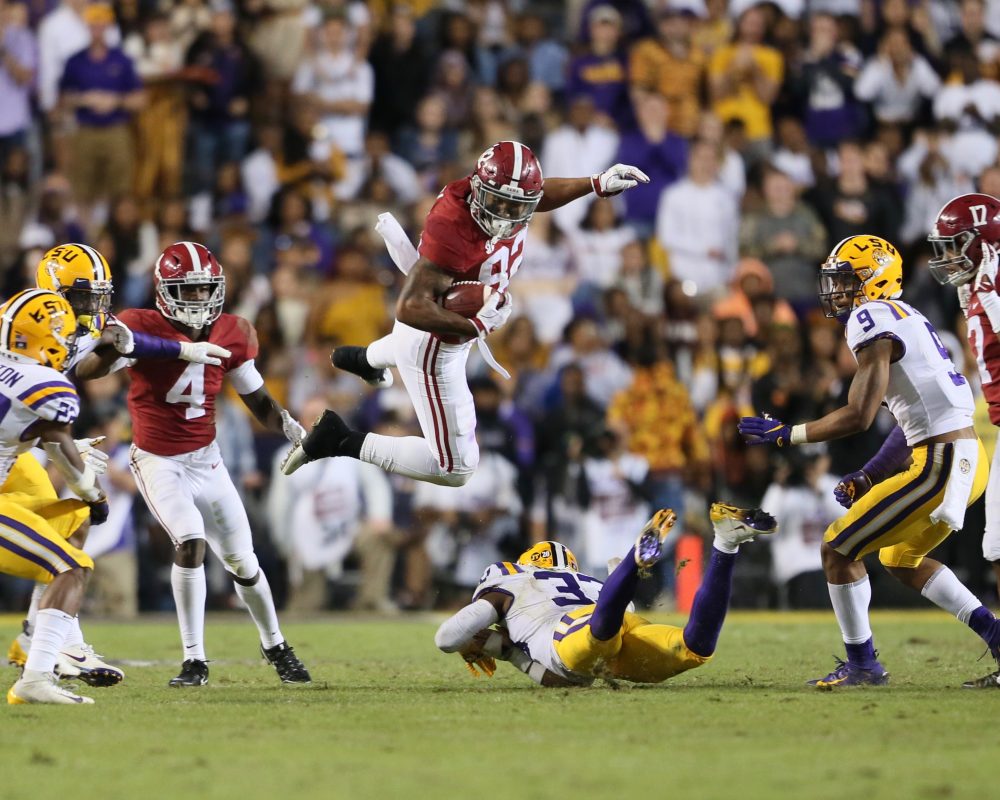 Welcome to the third installment of Bettin’ on ‘Bama where we take a look at how Coach Saban’s squad is viewed from the eyes of Las Vegas. In our first segment in the beginning of July, we took a look at Alabama’s National Championship odds, some Heisman Trophy prospects, and odds to win the SEC. Not much has changed. At the Westgate Las Vegas SuperBook, the Tide are still +250 to win the College Football Playoff and -150 favorites to win the SEC.

Last week, we took a look at some historical betting trends to help you place some wagers on the upcoming season. This week, we’re going to take a look at the rest of the SEC West and how bettors view their chances at knocking Alabama off the top of the division.

Texas A&M – The Aggies have attracted some attention in the college football marketplace during the offseason. After opening at 40-to-1 to win the SEC, Texas A&M is down to 25-to-1 at the South Point in Las Vegas. A&M’s regular season win total is sitting at 7.5 victories. Alabama defeated Jimbo Fisher’s squad by three touchdowns last season, but failed to cover the closing spread of 24 points. At the South Point, Alabama is currently a 14.5-point favorite over the Aggies in their October 12 clash. Texas A&M quarterback Kellen Mond is 60-to-1 to win the Heisman.

LSU – The Tigers always have the defense, but is this the year that Ed Orgeron’s offense catches up? Quarterback Joe Burrow (75/1) and running back John Emery Jr. (200/1) are both featured in the Heisman market. At the Westgate, LSU is sitting on a projection of nine regular season wins. After opening at 15-to-1 to win the SEC, the Tigers are down to 7-to-1. Alabama is currently a 16.5-point favorite over the Tigers in their November 9 meeting in Tuscaloosa. The Tide won last year’s meeting 29-0 as a 14-point favorite.

Mississippi State – When the Bulldogs were clicking last season, first-year coach Joe Moorhead was able to deliver top-20 victories over Auburn and Texas A&M. But when the Bulldogs got cold, they went really, really cold. Mississippi State scored a total of 16 points in their four regular season losses last season. Alabama covered the 21-point spread with a 24-0 victory in Tuscaloosa last year. Mississippi State is projected to win 7.5 regular season games with 50-to-1 odds to win the conference. Quarterback Keytaon Thompson is 300-to-1 to win the Heisman

Auburn – There appears to be some doubters on the Tigers for the 2019-20 season. At the Westgate, Auburn’s regular season win total opened at eight, but has been bet down to 7.5 victories. The Tigers are 20-to-1 to win the conference at the South Point. Alabama is currently a 14.5-point road favorite over Auburn in the Iron Bowl. The Tide covered last year’s 26-point spread with a 52-21 victory. Auburn quarterback Bo Nix is 100-to-1 to win the Heisman at the South Point.

Ole Miss and Arkansas – These two can be grouped together at the moment. Both schools are 300-to-1 to win the SEC this year. At the Westgate, Ole Miss’ regular season win total has been set at 5 victories with Arkansas at 5.5. The Tide defeated the Rebels by 55 last season, covering the spread by roughly five touchdowns. Alabama failed to cover last year’s game against Arkansas as a 35-point favorite (won by 34).