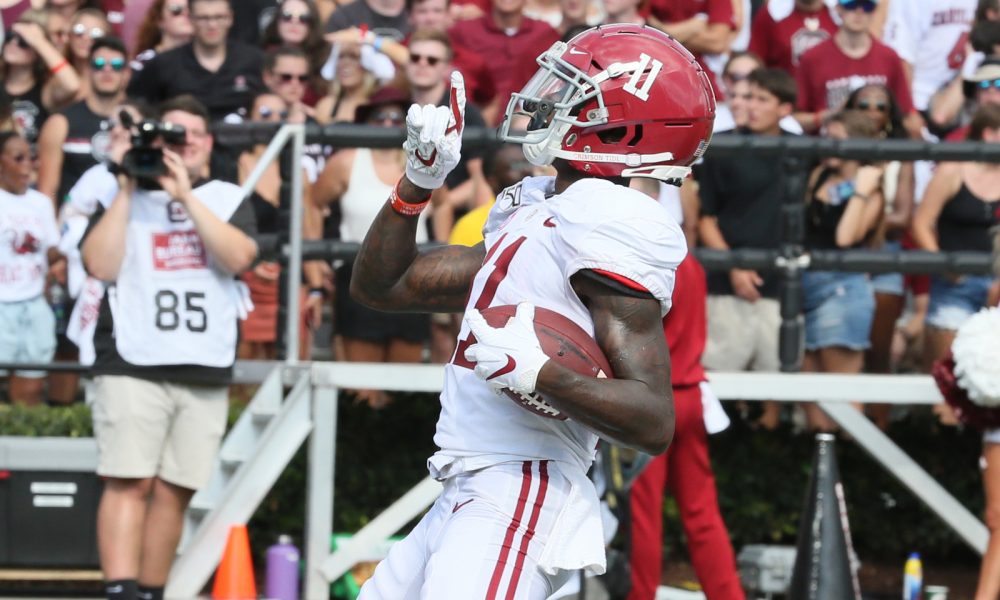 Summary: Tagovailoa, a junior, had a career day for passing yards (444) and touchdowns (five).

His output in yards was the third-most in school history for a single game and he tied his previous career high for scoring passes, matching his efforts from the 2018 Iron Bowl.

He became the first quarterback in Crimson Tide history to total 400+ passing yards with five touchdowns in the same game. Tagovailoa, who sits at 66 career touchdowns, is 12 scoring tosses away from surpassing former Tide signal caller, AJ McCarron (77) for most all-time.

As a starter, he was perfect on all assignments and did not allow a sack, quarterback hurry nor pressure in helping the Crimson Tide total 576 yards offensively.

Harris, a junior, posted a 100-yard game from scrimmage.

The 6-foot-2, 230-pounder totaled 36 yards rushing on seven carries; however, his exploits as a receiver did more damage to South Carolina.

Harris caught five passes for 87 yards and a tied a team-high in touchdowns (two). Despite telling the media in fall camp that was done hurdling, the California native turned in one of the most amazing feats of athleticism and it involved his favorite. He caught a pass from Tagovailoa on fourth down with three yards to go, stiff-armed one defender to the ground, hurdled another tackler, and kept his balance for a 42-yard score.

The play has been a fixture on SportsCenter so far this week, and it gave Alabama a 24-10 advantage at halftime.

Ruggs, a junior, had a career performance in Columbia, S.C.

The native of Montgomery, Ala., had six receptions for 122 yards and one touchdown. His output in yards was a career-high, while his six catches matched his career best.

Ruggs and teammate, DeVonta Smith, both collected 100-plus yards receiving – making it the ninth time in school history that Alabama has had two receivers boast 100+ yards in the same game.

Ruggs now has 19 career touchdown receptions, tying him with former Tide star Calvin Ridley for third all-time in Alabama history. He is just behind Jerry Jeudy, who stands second with 20.

Jennings, a senior, has been a player of the week honoree for a third consecutive time. He was exceptional against the Gamecocks, tallying six tackles (two for loss) and one strip sack.

The 6-foot-3, 259-pounder also had a quarterback pressure.

Summary: Bolden, a freshman, recorded a tackle on punt coverage and made a crucial tackle on South Carolina’s up-back from getting a first down on a fake punt in the second quarter.

Jobe, a sophomore, had eight tackles – including two on kickoff coverage.

He assisted the Tide in holding USC’s returners to just 62 yards.

Kaho, a sophomore, notched one tackle on kickoff coverage.

Along with Jobe, Kaho helped the Crimson Tide shutdown a very dangerous return game for South Carolina at Williams-Brice Stadium.

Moody, a sophomore, set the tone on special teams with a big hit on the first kickoff of the game.

After a physical first game of SEC action, Nick Saban decided to cancel Monday’s practice and give the players a day to rest. Practice will resume on Tuesday at 3:40 p.m.