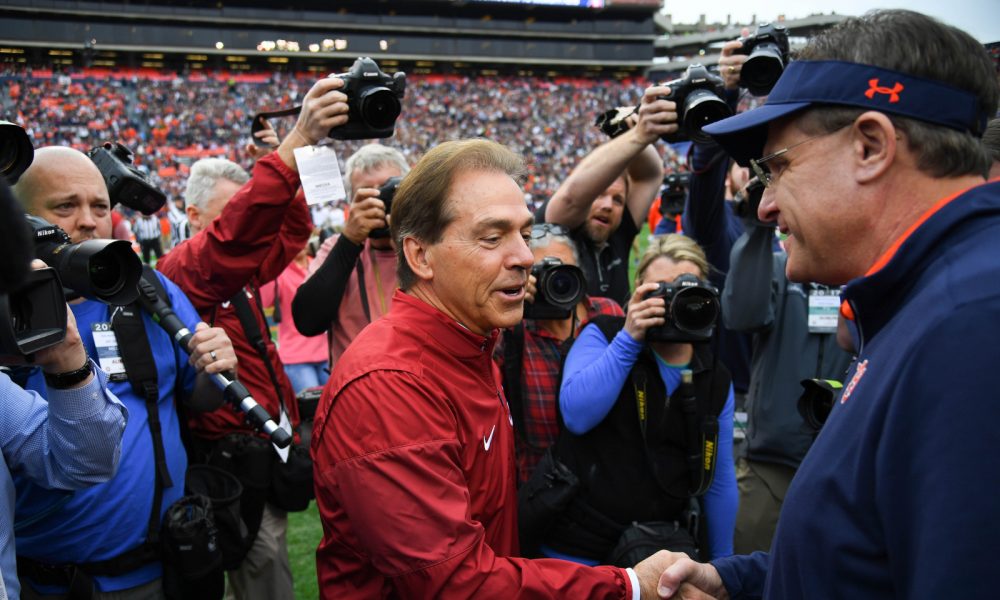 He may slip once in a while, but everyone has grown fond of Nick Saban dominating most challenges in college football as Alabama’s head coach. He has a bevy of championship rings in his illustrious career and always seems to get the best recruits; however, there is one thing the 68-year-old has not mastered: consistently defeating a ranked Auburn team on the road.

Saban is 8-4 with the Crimson Tide against the Tigers and three of the four losses came versus ranked Auburn teams.

He also has a losing record (1-2) when Alabama plays a ranked Auburn group at Jordan-Hare Stadium.

The 2013 season was an opportunity for Saban to achieve something that not even Pete Carroll did at USC: win three consecutive national titles.

RELATED: PODCAST: Things that stood out for Alabama on senior day versus WCU

On a play that was later etched in stone, the Tigers won off a missed field goal returned 109 yards by Chris Davis in what’s called the “Kick Six.”

Auburn secured a 34-28 victory in unbelievable fashion, killed Saban’s dream of a three-peat and went to play for a national title.

His second loss, though not as thrilling, was simply caused by mental errors.

Despite a rushing score from Bo Scarbrough and a great play from Jerry Jeudy, Alabama struggled tremendously at quarterback.

Jalen Hurts completed just 12 of 22 passes for 112 yards with one touchdown.

He had 82 yards rushing, but also lost a fumble. Auburn’s defense made it difficult for him to create big plays and the rushing attack of Kerryon Johnson – 30 carries, 104 yards, one touchdown – tormented the Tide.

Not to mention, Jarrett Stidham was effective as well in a 26-14 win for the Tigers. Regardless of the Tide winning a national title that year and Auburn losing its final two games, falling to Auburn would also indirectly lead into the start of coaching turnover on Saban’s staff. This week, Alabama will battle a ranked Auburn bunch (No. 16) at Jordan-Hare.

Under the leadership of Kevin Steele, the Tigers have a legitimate defensive front that possesses five to six guys who will be taken within the first two rounds of the NFL Draft.

No opponent has scored 30 or more points on this group.

Auburn has allowed 16.2 points per game and totals 26 sacks. Although it is at the mercy of the College Football Playoff committee, a convincing win over the Tigers goes a long way in having the Tide as one of the four top seeds.

Saban said on Monday that Auburn has the best front in college football and it will be the most challenging one to face Alabama.

Balance on offense and focus on defense will be highly important.

The task has been set before Saban and he’s ready to own it.

Alabama ranked No. 5 in CFP for third straight week
Update: What Alabama needs in order to make the College Football Playoff
To Top
%d bloggers like this: