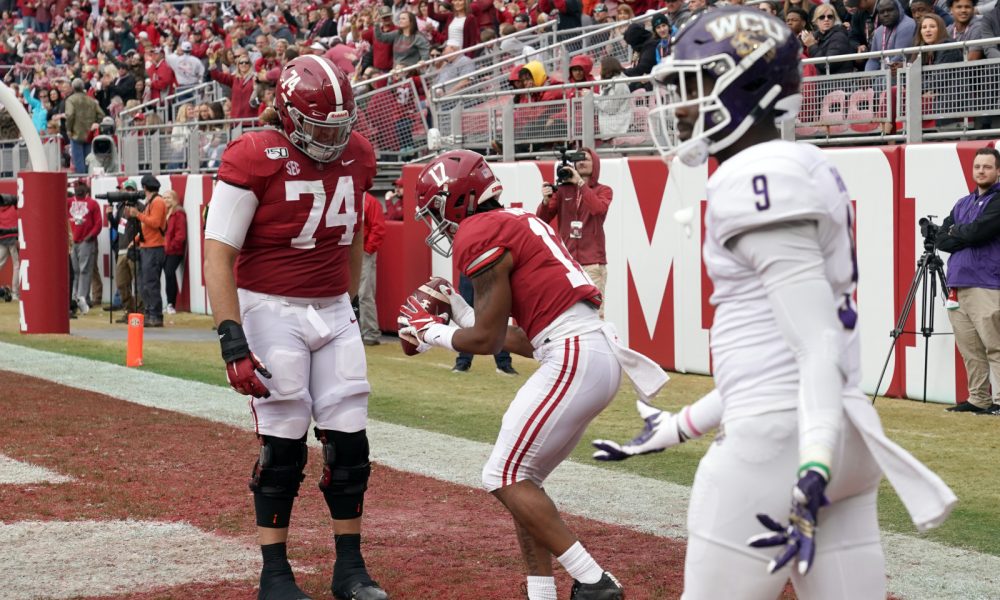 The offensive unit for the Crimson Tide was strong this season, in pushing a group that was second nationally in scoring (48.3 ppg), third in passing (343.5 ypg) and seventh in total offense (513.3 ypg).

On Tuesday, the Foundation for Teamwork announced Alabama’s front as one of four finalists selected for the Joe Moore Award.

The honor goes to the best offensive line.

For the group of Alex Leatherwood, Evan Neal, Landon Dickerson, Deonte Brown and Jedrick Wills Jr. (from left to right), the Tide allowed only 12 sacks in 381 pass attempts.

It ranked fifth nationally in fewest sacks given up (one) per game and opened holes for Najee Harris’ first career 1,000-yard (1,088) season.

The junior from California turned in 11 touchdowns on 185 carries and averaged 90.7 yards per game.

Alabama led the Southeastern Conference and was sixth in all of college football for running plays gaining five yards or more. Kyle Flood, the Tide’s offensive line coach, helped a group that carried a percentage of 45.4% in that category.

Despite not getting into the College Football Playoff, this group was athletic, played with sound technique and was fun to watch at times.

The tandem of Dickerson and Brown were very physical at the attack point, while Wills excelled in neutralizing speed rushers on the edge.

Neal could end up being the best of the bunch.

As a freshman, he did not allow a sack all season and was named to Pro Football Focus’ All-Freshman Team for his efforts. Alabama won the Joe Moore Award in its inaugural year of 2015; however, it is competing against LSU, Ohio State and Oregon for the honor.