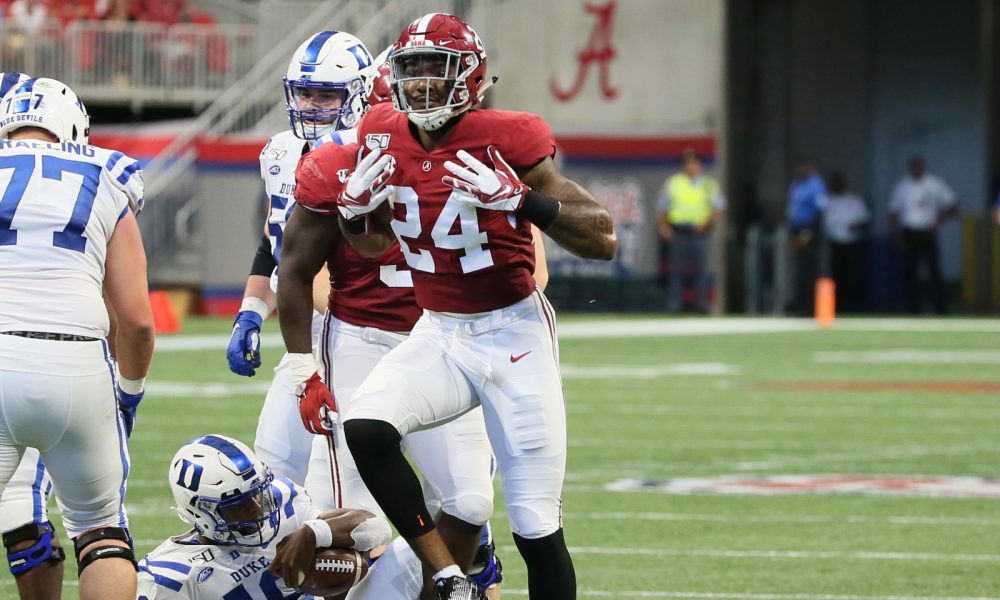 Linebackers and defensive linemen arrived at Lucas Oil Stadium on Tuesday for the NFL Scouting Combine.

While both positions will take the field on Saturday for workouts, measurements were done on Wednesday and three former Alabama players stood out.

Terrell Lewis endured some injuries in his career, but the talented edge rusher was among college football’s elite at full strength. He finished second on the Crimson Tide for both sacks (six) and tackles for loss (11.5) in 2019, while carrying a team-high 16 quarterback hurries.

A native of Washington, D.C., the former five-star will be remembered for his critical sack of Georgia’s quarterback, Jake Fromm in the 2018 College Football Playoff national title matchup.

RELATED: Henry Ruggs on his potential 40-time: ‘My goal is to be the fastest ever’

His wingspan was 83 3/8” and with his nonstop motor, this event was made for him.

Anfernee Jennings, like Lewis, dealt with his share of medical mishaps. Despite the pain, Jennings was one of Nick Saban’s most productive defensive players. He led Alabama in both sacks (eight) and tackles for loss (12.5), while tallying eight quarterback hurries last year.

He was one of the Tide’s best edge setters, in terms of stopping the run, but Jennings had no issues with frustrating quarterbacks. He measured slightly under 6’3” (6-2 1/8”) yet remained with a strong weight of 256 pounds.

The former four-star boasts a wingspan of 79 ½”.

Regardless of him not posting big numbers in 2018 and 2019, no one disputes the fact of Raekwon Davis being a massive human being.

Hopefully, the drive from his 2017 season (sophomore) will be on display this weekend.

His height/weight came to 6’6” and 311 pounds, but his wingspan is insane. Davis carries a wingspan over seven feet (85-plus inches) and has 11” hands.

With Chase Young of Ohio State not participating in on-field workouts, this gives Davis, Lewis and Jennings a chance to show out and separate themselves. Davis actually carries bigger hands and has more of a wingspan than Young, who has 10” hands and a wingspan of 80 5/8.”