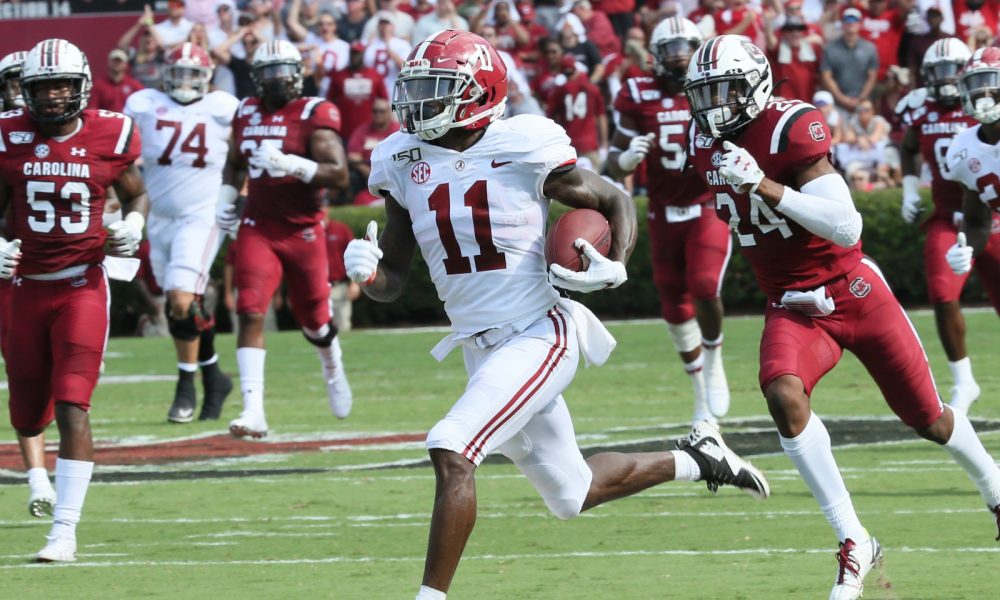 He is one of the top five receivers in this year’s NFL Draft class and for some analysts, Henry Ruggs III of Alabama is considered the best option. After fulfilling the dream of his fallen friend, Roderic Scott, Ruggs finished his career with the Crimson Tide as a fan favorite, the fastest weapon on the team, a Southeastern Conference Champion and a national champion.

Despite playing two years of football at Robert E. Lee High School in Montgomery, Ala. Ruggs grabbed a five-star rating and came to the Tide in its 2017 signing class. He totaled 98 career receptions – including 24 for touchdowns and made a name for himself with his elite speed.

In discussing his performance from the NFL Combine, Ruggs spoke to former Southern California standout and NFL running back, Reggie Bush. A human highlight reel, Bush knows something about being electrifying on the field.

Even though Ruggs turned in a faster 40-time than he did at 4.27 seconds, the former Tide star was still a little disappointed in the outcome.

When it comes to the lessons he learned at Alabama, Ruggs told Bush that ‘players have to always go 100 percent.’

“I’m of course going to compete and do what I do, but I never knew it would be like this. Junior year is when it became a reality.” ?@__RUGGS sat down with @ReggieBush to discuss his performance at the NFL Combine and what he expects out of himself in the NFL ⬇️ pic.twitter.com/d0P6v9Urq9

“You can’t take a day off, especially with the competition because anybody can come and get your spot,” Ruggs said. “When you have players like that, you never know how many chances you will get at anything. You have to always be at the top of your game.”

Ruggs was certainly on his A game in the last two years.

He totaled over 40 catches and collected 700-plus yards receiving in 2018 and 2019, while carrying the team’s highest yards per catch average (18.6) last season.

For the fastest wide out in the draft, he is specific about where he wants to fall in the venue.

“I’m from the south,” Ruggs said with a smile. “I’ve rarely been out of Alabama, so if you ask me, I want to be somewhere in the south.”

Ruggs will be one of six former Alabama players to participate in the virtual draft.