We have seen the medical reports, workout videos and any other information necessary on Tua Tagovailoa returning to 100 percent.

A cat and mouse game continues at the top of the NFL Draft, as analysts now have Justin Herbert (Oregon) going to the Miami Dolphins at No. 5.

It has been a rigorous push for Tagovailoa since sustaining a hip injury in November of 2019; however, the faith and determination of the native Hawaiian never allowed him to doubt himself or the people around him.

According to Trent Dilfer, a former NFL quarterback and Super Bowl champion, he said the 2018 Heisman finalist ‘moves better now than before his injury.’ 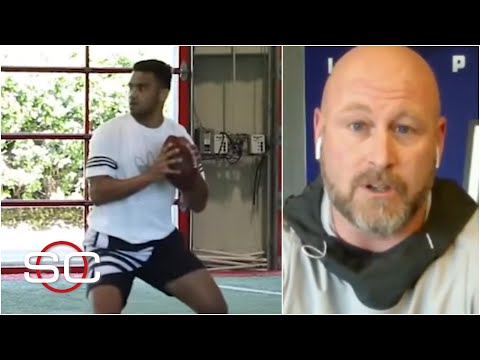 “He is stronger, leaner and quicker,” Dilfer said of Tagovailoa via ESPN. “He is all the things you are looking for.”

Dilfer, who has known the Tagovailoa family for a long time, coached the 2017 national championship quarterback at the Elite 11 and has been navigating him throughout the draft process since January.

Although he is not injury prone, Dilfer said what has led to Tagovailoa’s medical mishaps at Alabama was him trying to be superman all the time.

“In playing the NFL game, I’ve talked to him about not trying to win every single down,” Dilfer said. “Getting the ball out of his hands quicker… Utilizing his giftedness, which is incredibly quick eyes and seeing the whole field. Having a quick delivery… He’s the most accurate passer I have ever been around. Just utilizing that skillset to minimize the hits on his body.”

Both Dilfer and Nick Saban know how special he is, Tagovailoa’s biggest trait is developing strong relationships with others.

In the NFL, the quarterback must have firm chemistry with everyone on the team and the former five-star carries this quality in spades.

“He makes people feel important,” Dilfer said of Tagovailoa. “Jerry Jeudy came to Nashville during a very weird time for all of us and trained with his buddy. He did not have to do that, seeing how he’s going to high in the draft, but he flies out here to help Tua with his pro day.”

Per Dilfer, Tagovailoa remains well connected with other former teammates for the Crimson Tide as well as coaches. Even the people he was around in Nashville felt a warm, positive vibe from him.

“He makes you feel better than you really are,” Dilfer said. “I don’t if there is a better trait you can have as a quarterback.”

He pushed Jalen Hurts and Mac Jones to be successful, while showing the nation he can adapt to three different sets of offensive coordinators and still turn in impressive numbers.

RELATED: Henry Ruggs III recaps his biggest lesson from being at Alabama: “You have to always be on top of your game”

He is prepared to change the fortunes of a franchise and for Tide fans, they are excited to watch him play for a long time.