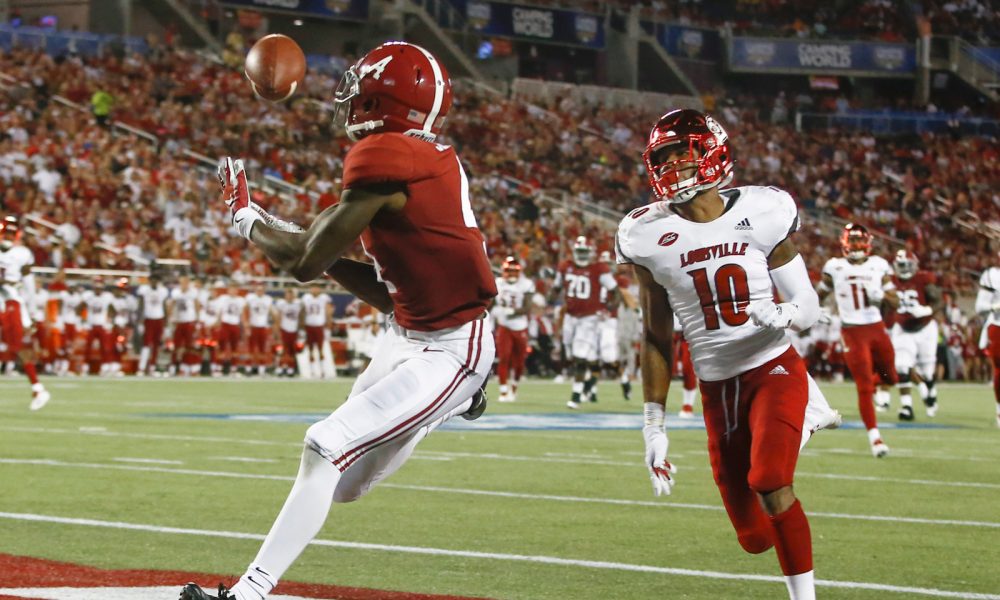 The state of Florida has been good to Nick Saban and Alabama football in recruiting.

Since 2008, the Crimson Tide signed Amari Cooper, Calvin Ridley and Jerry Jeudy from the sunshine state and all three are in the National Football League. Each one carved out its own version of success at Alabama, helping the program win national championships.

All three were first-rounders in the NFL Draft, including Jeudy as the No. 15 overall pick of the Denver Broncos on last week. In an interview with Matt Boyer, who covers the Broncos, Saban said he knew Jeudy was going to be a special football player as a junior in high school.

“His ability to drop his weight and burst out of a break. He has great speed. He was not as big then; he has developed a lot of maturity from a physical standpoint… but he did a fabulous job for us. He was very productive, a hard worker and a very good guy to have in your organization,” Saban said of Jeudy.

During his three seasons with the Tide, Jeudy got better each year and even led the team in receiving as a sophomore. He totaled 68 catches for 1,315 yards with 14 touchdowns in 2018 and earned both the Fred Biletnikoff Award and All-American honors. The former five-star carried Alabama in receptions (77) last season and recorded 1,163 yards with 10 scores.

Jeudy assisted the program to a Southeastern Conference title in 2018, as he caught a critical touchdown pass from Jalen Hurts in the fourth quarter against Georgia at Mercedes-Benz Stadium in Atlanta.

When it comes to the school’s record book, Jeudy is fifth all-time for receptions (159), fourth in receiving yards (2,742) and second in touchdowns (26).

As talented as he is, Saban loved Jeudy’s work ethic even more.

RELATED: Henry Ruggs III using his professional platform to make a difference in Montgomery and Nevada

“We had to monitor his work, so we would not have overuse problems with him,” Saban said. “We would have practice and he would want to go into the weight room and work extra, and we would say ‘Jerry, this is not the time of year you need to be doing all that stuff,’ but he was always a good practice player. He has a great attitude about things. He is smart. He is really instinctive playing the position. He is a great option route runner. His greatest strength is his ability to drop his weight, get in and out of a break and accelerate, but he is also fast.”

While some guys are quick and others are fast, Saban sees Jeudy as both. Despite him being an exceptional route runner and having attention to details, Saban stated that patience was an issue for Jeudy early in his career.

“He would cut things short,” Saban said. “He learned that’s not the way to do it. Doing it correctly and having patience is the best way to get open. He got very proficient at it.”

He had Tua Tagovailoa as his quarterback in two of three years at Alabama, but now Jeudy has the challenge of building chemistry with Drew Lock.

Lock, an alumnus of the University of Missouri, enters his second year in the fall and will be the starter for the Broncos.

He is very excited for the opportunity to work with Jeudy.

In the same way he adjusted to Tagovailoa keeping plays alive in the pocket, Saban believes Jeudy will collaborate well with Lock.

Of the receivers that came through Alabama from South Florida, most of them either did their damage from the outside or in the slot.

According to Saban, Jeudy is a combination of both yet he feels that much of his production in the league may come from the slot.

“I think he is going to have a tremendous amount of success in the NFL,” Saban said.

RELATED: Alabama’s plans to open in the fall, give hope for college football

With him joining forces with Courtland Sutton, it will be interesting to see how Jeudy takes flight in the league this fall.

﻿
Henry Ruggs III using his professional platform to make a difference in Montgomery and Nevada
Redskins decline the fifth-year option on Reuben Foster’s contract
To Top
%d bloggers like this: