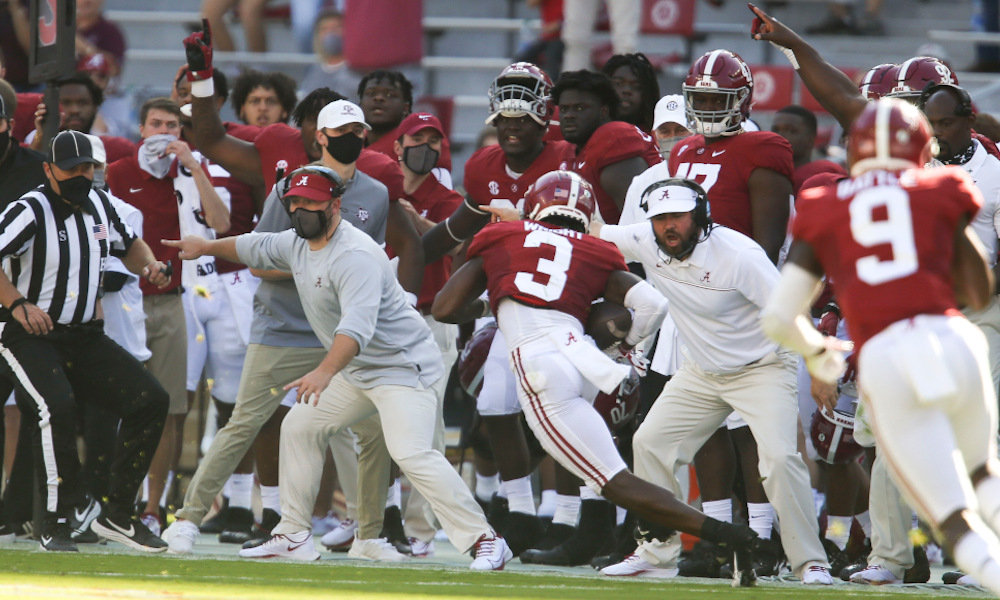 Alabama football is 2-0 after defeating Texas A&M, but there is still room to improve.

Despite covering the -17.5 point spread and getting a win in its home opener, the Crimson Tide has a couple of things keeping it from becoming a national championship group.

Offensively, Alabama has found its pace with Mac Jones at quarterback.

RELATED: Jaylen Waddle continues his strong start to 2020 with a career day versus TAMU

He has proved doubters wrong in each of the last two games. Some improvement has been made on defense; however, a few mental errors on the field led to touchdowns for the Aggies that could have been prevented. As the Tide looks to take steps forward in practice this week for Ole Miss, yours truly of Touchdown Alabama Magazine breaks down the good, bad and the ugly for Alabama in its win over Texas A&M.

After a good showing against Missouri, the passing game for the Crimson Tide was the story again last week. The offensive line allowed one sack, as Jones completed 20 of 27 passes for 435 yards with four touchdowns to one interception.

He had a career-high for passing yards, while placing fourth all-time in school history for most yards in a single game. Jones completed 74.1 percent of his throws and guided the Tide to 45 points and 544 yards offensively in a 52-24 rout of Texas A&M at home.

When it comes to the trio of Jaylen Waddle, John Metchie and DeVonta Smith, all of them made plays. Both Waddle and Metchie had career performances, and Smith totaled 63 yards with one score on six catches.

Alabama’s defensive front did a good job of containing Kellen Mond. He rushed for 90 yards last year with one touchdown, but could only muster up 19 yards rushing on eight carries this time. The Tide controlled the edge and forced the veteran quarterback of the Aggies to beat it through the air. Mond attempted 44 passes, which is not a good recipe to beat Alabama.

RELATED: Mac Jones used a career performance versus Texas A&M to kick off his Heisman campaign

It had some rough moments, but the Tide’s secondary did force two turnovers.

Daniel Wright recorded a 47-yard interception return for a touchdown and Malachi Moore collected a pick in the fourth quarter.

Will Reichard, a sophomore, stepped up in the kicking game. He made all seven of his PAT’s (point after touchdown) and connected on a 27-yard field goal too. Reichard is feeling more comfortable in his return from injury in 2019.

For an offensive unit that can pass protect well, Najee Harris had just 43 rushing yards on 12 carries. He did record two touchdowns, but the line provided him with more opportunities against Missouri. Brian Robinson totaled 60 yards on 10 attempts; nevertheless, Saban told local reporters that he wants to get the running game to be more consistent.

Regardless of a veteran defensive front for Texas A&M, this offensive line for Alabama has the potential to win the Joe Moore Award and it has to do a better job of giving its backs a chance.

In reflecting back on the Tide’s defensive front, it did not generate a single sack.

Although it forced Mond to throw a lot and limited his ability to create with his legs, Alabama at least posted three sacks in its meeting with Missouri. Sacks are not the only way to affect the quarterback, but it does gain attention.

Some of the best groups the Tide has had defensively under Saban were those that had signal callers on the ground.

Hopefully, Alabama will put together some sacks this week against the Rebels.

He was decent in week one, but Sam Johnson had a 26-yard punt versus Texas A&M. He averaged 33 yards per attempt on two kicks and while he was okay against the Tigers, fans are wondering what is going on with Ty Perine.

Now a sophomore, Perine averaged 44.7 yards per punt as a freshman in 2019. He provided a breath of fresh air in six games last year for the Tide.

With Reichard improving, the punting aspect needs to pick it up.

These pre-snap penalties are driving Saban up the wall.

Alabama committed six penalties against Texas A&M for a loss of 40 yards — including two false starts on Evan Neal and Emil Ekiyor Jr.

During the third quarter, the Tide had a possession where it committed three penalties and still had an 87-yard scoring connection from Mac Jones to Jaylen Waddle. Even with a positive result on the drive, Saban knows there will be disciplined teams down the road that will make Alabama pay for its mistakes. When unnecessary fouls were not happening, busted coverages between the linebackers and defensive backs occurred versus the Aggies.

Whether it was Ainias Smith (running back) coming out the backfield or a tight end on a route, the Tide had moments of mental lapses in coverage — which led to two touchdowns for TAMU.

If not for those plays, the game could have easily been a blowout victory for Alabama.

Also, the Crimson Tide has to finish tackles.

Players are making big hits, but they are not wrapping up and finishing the play. This could come back to hurt Alabama versus Ole Miss, Georgia, Mississippi State or LSU, if it’s not cleaned up.

Communication and execution is what’s missing from the Tide on defense. Guys need to be in constant communication in pre-snap, during the snap and after the snap, and then execute the play accordingly. A lack of doing this effectively allowed Missouri to tally 19 points and Texas A&M to turn in 24 points. Lane Kiffin will be watching film to see how he can exploit his former team.

Alabama has to clean up the penalties and execute plays on defense.